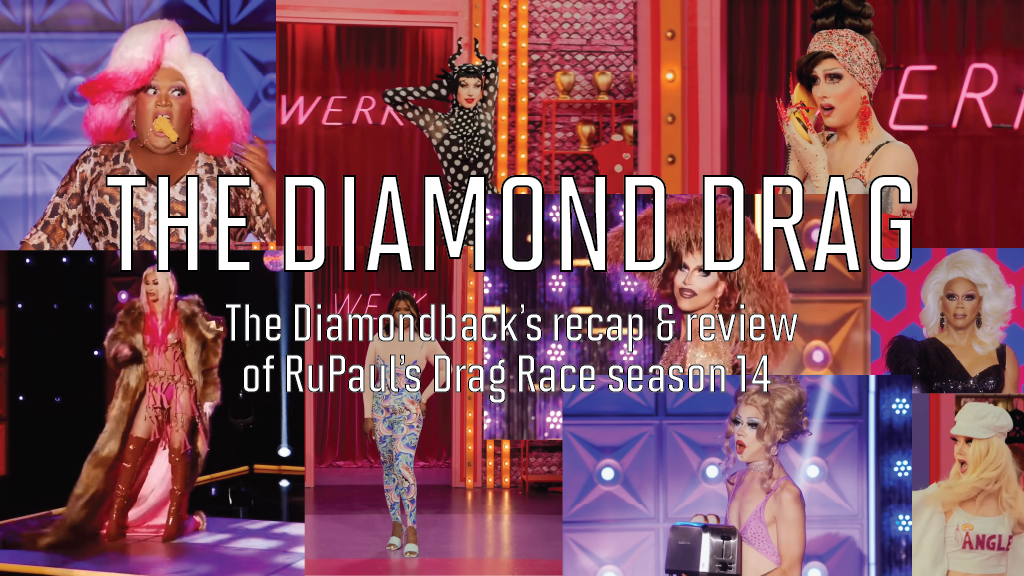 Welcome to The Diamond Drag, The Diamondback’s recap and review of RuPaul’s Drag Race. Each week, we’ll be taking a look at season 14 and giving our honest thoughts.

Season 14 premiered with a split premiere format. Seven out of the 14 queens entered the Werk Room to compete for the title of America’s Next Drag Superstar.

The queens entered the Werk Room one by one and we met, in order of appearance, Alyssa Hunter, Bosco, Kornbread “The Snack” Jeté, Willow Pill, Kerri Colby, June Jambalaya and Orion Story.

The RuMail alarm shortly went off revealing to the queens that the season 14 premiere would be  split. After the video message, RuPaul walked into the Werk Room to welcome the queens. Contrary to season 12’s split premiere, a queen would be eliminated on this episode.

RuPaul then announced the first mini challenge, a photoshoot. The queens were strapped to the Lip Sync for the Crown wheel and had to pose on the wheel next to the faces of the last three winners. This photoshoot was … interesting. I don’t think any queen had a good or bad photo but if I had to pick a favorite, it would be Bosco. Yet, Kerri won the mini challenge.

After the photoshoot, we got the typical Drag Race first-episode trope. The queens de-dragged, and one got the annual ‘we’re de-dragging and who is cute out of drag’ confessional — cliche but fun. The first maxi challenge of season 14 was a talent show. I liked them changing up the format, switching from the previous two seasons’ first episode “RuMix.”

[Review: ‘Once Upon a One More Time’ is an odd but fun take on Britney Spears’ classics]

The queens started to chat and get to know each other. They all dismissed Willow, which I didn’t love but realized is inevitable in a competition.

In some Werk Room chats with Ru, we learned some interesting backstory about several queens. Kerri talked about her famous drag family, the Colby’s, and coming from a dynasty of famous queens in the community such as her drag mom Sasha Colby. Willow also opened up about living with chronic illness and how it shaped her sense of humor and artistic perspective.

The next day, the queens walked in and got ready for their first maxi challenge. The makeup chats were fun, but the real shining moment was guest judge Lizzo walking in and surprising the queens. She gave them a little pep talk and looked absolutely amazing.

On the main stage, RuPaul surprised us with a performance of his new song “Catwalk.” RuPaul is a 61-year-old man in full drag, so seeing him perform is always a fun surprise.

The talent show began with June’s African dance routine, and I thought it was really unique and had a cool perspective.

Next came Bosco’s burlesque performance, and I was underwhelmed. Burlesque is much more than a pretty person taking off clothes —  Bosco didn’t have that seduction or sensuality associated with burlesque. I liked the flower petal theme, however.

Alyssa’s guitar act was also underwhelming. I think June spoke for the audience when she said she thought Alyssa was going to actually play the guitar, not use it as a prop.

I thought Kerri jumping rope was really fun, though I agreed when the judges later said they wished she had brought out the jump-rope earlier.

Orion’s trailer park workout skit was a sight to see. Comedy has never been successful on a Drag Race talent show and Orion was funny at moments, but it just broke up the energy.

Following Orion was Kornbread, who shut it down with an original song. It was so much fun and genuinely a good song. I need Kornbread to put it on streaming services, so I can listen to it every day.

Willow’s act will go down in Drag Race history as one of those shared cultural moments where you remember exactly where you saw it happen. My family and I could not take our eyes off of the TV as Willow pranced around the stage to Enya’s “Only Time.” It was one of the best things I have ever seen in my entire life.

The runway category was “signature showstopping drag” and in general, it was a decent first runway. Alyssa, Bosco and Kerri were all my top marks of the week, and Willow and Kornbread weren’t bad but not my favorites.

Kornbread was announced the winner of the first maxi challenge of season 14 and June and Orion were the bottom two. The two queens lip-synced to Lizzo’s “Water Me,” and they both put up a good fight. I felt like June performed the song in a more traditional way, while Orion did a more campy, fun performance.

RuPaul declared June the winner of the lip-sync, and Orion was asked to sashay away, making her the first eliminee of season 14.

I felt like a Drag Race fan you couldn’t please because last year, I complained about season 13 having three weeks of no eliminations but was now disappointed to see someone go home. All in all, I really don’t dislike anyone but my favorites are Willow, Kornbread and Bosco.

Season 14 kicked off with a strong premiere, and I am excited to see what these queens do.