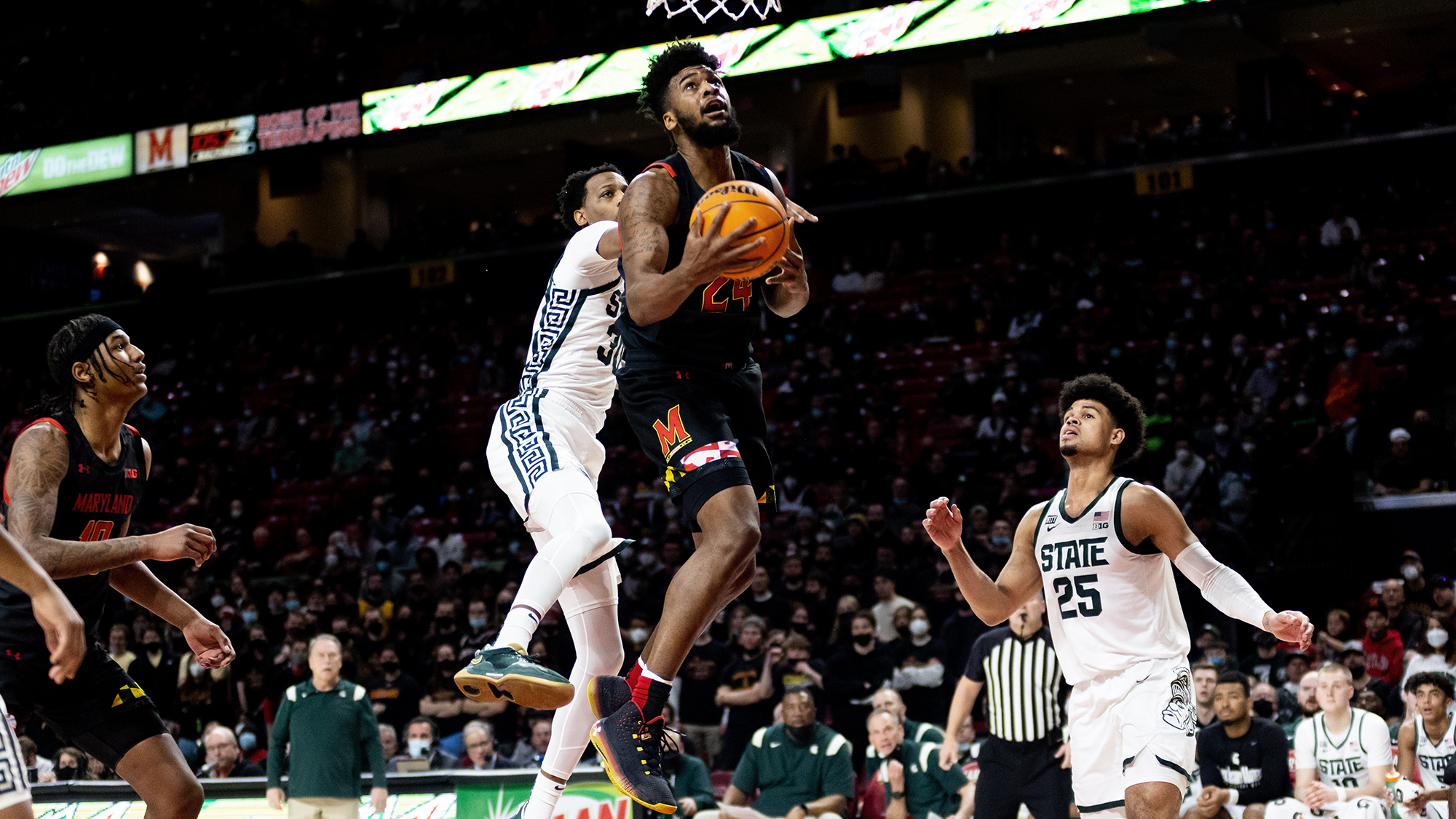 It was so quiet in the Xfinity Center, you could hear Eric Ayala say “get in there” as his free throw danced on the rim before just dropping in the basket.

It was just as silent the moment before Donta Scott’s layup hung on the rim for what felt like minutes before sinking in the net.

And it was silent as Fatts Russell’s potential game-winning shot hurtled through the air, only to go wide of the basket.

Maryland men’s basketball (11-10) hung with No. 13 Michigan State (16-4) until the bitter end, but the Terps were unable to gain a lead in the second half after falling behind by as many as 15 points.

“Disappointed we come away with a loss,” Manning said. Extremely happy and proud of the effort our guys used to fight back and get in the game.”

Manning said he wasn’t certain of Russell’s status ahead of the game and noticed him playing through pain the entire night, but he said that seeing him keep playing “doesn’t surprise me.”

“I figured out this morning, we had shootaround and I just decided I’d give it a go.” Russell said.

He didn’t show any lingering issues in the opening moments of the game, taking a fastbreak across the court and finishing at the rim around multiple defenders.

Russell got the first score of the game, but shortly thereafter, Maryland spent most of the night chasing.

An open three for Tyson Walker gave the Spartans their first lead. A trio of shooting fouls on the Terps gave Michigan St. free trips to the line — and the Spartans cashed in.

Michigan St. expanded its lead to as much as five before Maryland started clawing its way back in. After starting 0-for-5 from the field, Scott finally found his rhythm.

Scott made his next three attempts, all coming in the paint. A pair of Ayala free throws put the Terps back in front and a Hakim Hart drive against 6-foot-9 Joey Hauser pushed Maryland forward.

The Spartans started slow, but came to life in the final eight minutes of the opening half, making seven of their last 12 shots in the period.

“We had a little let down,” Ayala said.

Michigan St. is one of the deepest teams the Terps have faced this season. And it showed. Six players had four-plus points after 20 minutes.

Maryland certainly didn’t help matters for itself, failing to find a point in the final 4:50 of the half. It was a typically slow end to the opening period that left the Terps in an unfortunate hole with one half remaining.

It’s been a familiar sight that Maryland needs to dig out of a hole largely created by itself, but as soon as the ball was inbounded, the Terps rose to the occasion.

“As a team I think we fought hard,” Ayala said. “It’s something we can build off of.”

After Hauser sunk a three-pointer and finished a layup for five quick points, Maryland surged.

Ayala fought for a make under the basket, seeing the ball fall and earning a trip to the line for an extra point. Scott was next to drive in the paint — with some help from Qudus Wahab spacing out the defense — eventually finishing at the basket.

A second-chance dunk from Wahab and an easy layup for Russell put the Terps on a 9-0 run and forced a timeout from Michigan St. coach Tom Izzo.

Quick out of the timeout, Wahab found another bucket, lifting a floater over the head of Hauser. However, the Spartans managed to respond after 11 unanswered points with back-to-back makes by Malik Hall.

Maryland continued to keep Michigan St. within reach, taking a Russell three and six points in three minutes of play from Julian Reese to shrink the deficit to four.

“I give a lot of credit to Maryland, Danny [Manning] the job he did,” Izzo said. “We’re 15 up, should’ve been able to close it out. We didn’t and that was the cause of them playing well and playing harder than hell.”

The Spartans always knew how to respond. Every time the Terps pulled themselves to a three or four point margin, Michigan St. was there with a dagger.

First it was Max Christie with a silencing jumper, then Marcus Bingham with a deep three that erased the boost Maryland got from a pair of Ayala free throws.

Finally it looked like the Terps would get the chance to retake the lead, using Scott’s hanging layup and a perfect trip to the line from Hart to bring the deficit to one measly point.

Julius Marble put Michigan St. back up by three with a pair of free throws. But Russell said it was time to bring things back to even.

His three sank and the final three minutes was an essential reset to provide the winner, knotted at 61.

Hall and Scott each sank a pair of free throws to offset each other. But scoring became a struggle for either side. A lengthy review on an out-of-bounds call didn’t go Maryland’s way and required a strong defensive stop to keep the Spartans from a go-ahead basket.

Both teams were stingy on the defensive end, keeping the other silent for over two minutes. But it was Hall who found the winner, getting in the paint and putting a layup past the Terps.

With under two seconds remaining, all Russell could do was heave a shot from deep and hope it went in. But this time around, it wasn’t to be.

“We can definitely pull a couple things from this game and use it to continue to build what we’re trying to do here,” Manning said.