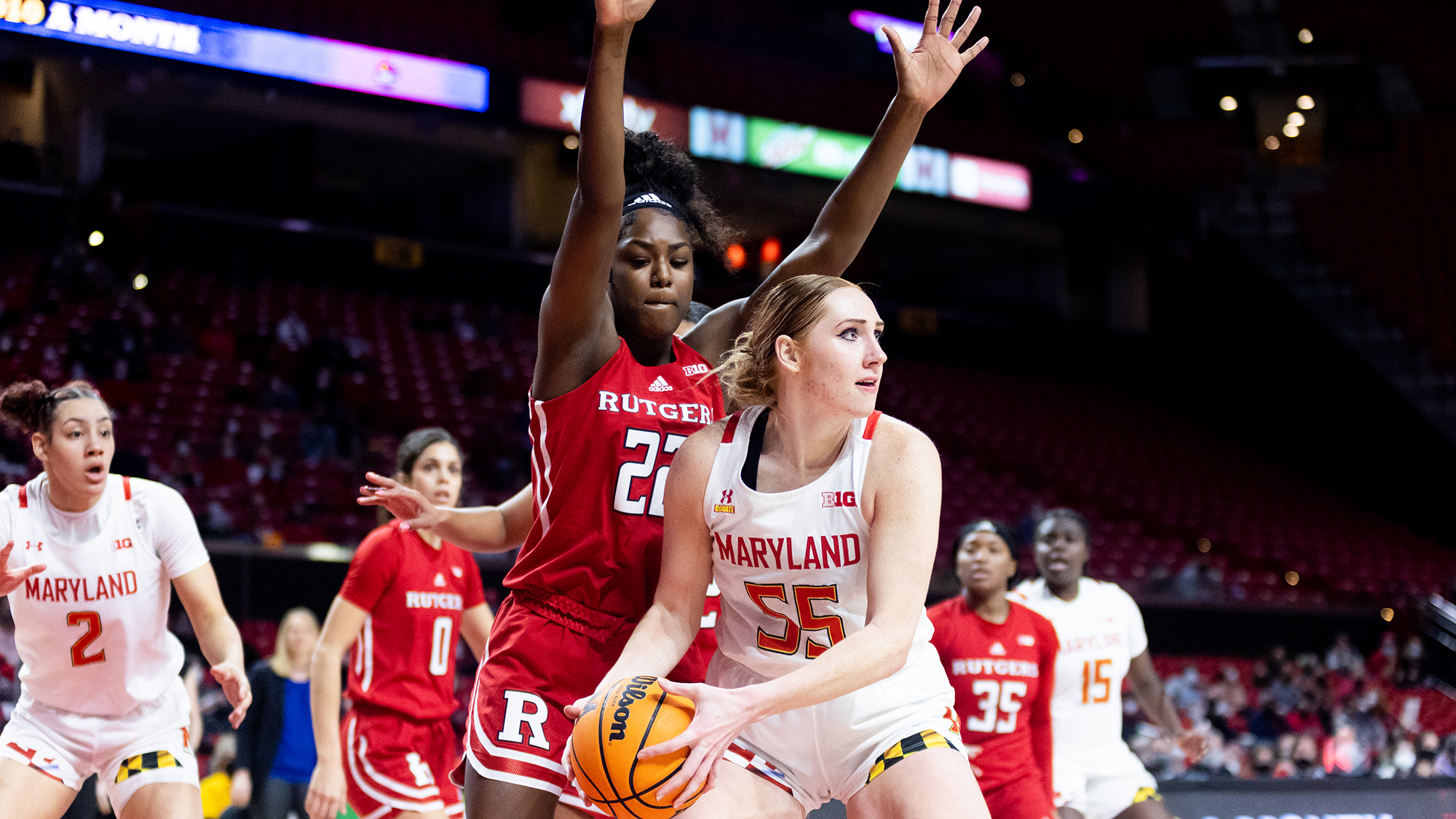 Since the calendar flipped to 2022, Maryland women’s basketball’s Chloe Bibby has been one of the more efficient players at coach Brenda Frese’s disposal. Following her 22-point output against Rutgers on Jan. 27, Bibby was a catalyst once again — early in the game this time.

After a quiet start in their Sunday afternoon showdown with Penn State, the Terps found themselves locked into a 14-14 tie with 2:33 remaining in the first.

Even with plenty of time left to play, Bibby and the Terps were not satisfied with their lackadaisical start on offense. Mimi Collins, who chipped in 14 points off of the bench, kickstarted the Aussie-led onslaught that followed.

Bibby connected on three consecutive baskets — all off of Penn State turnovers — following Collins’s bucket to make it a 10-point lead. Bibby then did some dirty work on the glass supplying the offense with two more scores thanks to her quick-witted outlet passes.

While Bibby had many shining moments as the clock ticked down in the first quarter, it was a phenomenal team effort throughout the game that got the job done. Despite some troubles down the stretch, Maryland found its way into the win column for the third straight game, 82-71.

“We’re moving towards February, that’s kind of where I expected us to be rounded into form given all the adversity and getting Diamond back into the fold,” Frese said. “I think we’re moving that needle a little bit closer.”

It was a pedestrian start for the Terps. They held a slim 10-8 lead in the opening half of the first quarter on just 33 percent shooting.

The influx of attempted shots — 13 in the first 5:23 — was largely due to the work on the boards. After struggling on the glass in the early stages of its matchup against Rutgers on Thursday, Maryland corralled nine offensive boards to go with its 13 rebound total in the first quarter.

“Definitely a point of emphasis for us in this game was to be able to get on the offensive glass,” Frese said. “They run a four-guard lineup quite a bit, so we knew we were going to have the size.”

Despite the plethora of second-chance opportunities, it was hard going for the Terps offensively. That is until the scorching-hot Bibby ignited a scoring run.

Bibby then pounded the glass as she collected two offensive rebounds on one possession before finding Diamond Miller for the lay-in with 34 seconds left. After grabbing her fourth board, Bibby wrapped up the quarter with an outlet to Miller, who then delivered a beautiful dump off to Angel Reese down low to make it a 13-0 run.

“If you penetrate you’re getting other people open,” Miller said. Collins added, “Once they decided to step up, they left even more plays open because that’s just what happens when you play against Maryland.”

What was once a 14-14 game turned into a 27-14 Maryland lead after 10 minutes. The Nittany Lions didn’t fare much better in the second quarter either as the Terps racked up bucket after bucket thanks to turnovers by the home team.

Miller nailed a three from the top of the arc as the buzzer sounded to put an exclamation point on one of Maryland’s most complete halves of basketball in some time.

Maryland entered halftime with a 48-29 lead. A significant portion of the Terps’ advantage came off turnovers as they cashed in on 17 points off of 15 Penn State giveaways.

The third quarter was a bit more back-and-forth in the score column. While Maryland was able to keep scoring, the Nittany Lions cashed in on four long-range jumpers to cut the lead to single digits for the first time since the first quarter.

But just as Bibby had done in the opening quarter, she once again stabbed a stake through the hearts of the Penn State faithful. With tons of momentum on their side, Penn State ceded a buzzer-beating three from Bibby to push the margin back into double figures.

That three from Bibby silenced the crowd, but it didn’t put it to sleep. Penn State continued to punish the Terps for its late rotations.

A backdoor cut by Leilani Kapinus freed Marisa down low at the 7:17 mark. But the Nittany Lions’ leading scorer ignored a contested layup opportunity and instead made the extra pass to a wide-open Kelly Jekot for three.

It was one of Penn State’s eight three-pointers on the day and it forced Maryland into a soul-searching timeout with the lead shrunk down to eight.

“I think the biggest hurdle for this team is just consistency,” Frese said. “I think we took our foot off the pedal and relaxed. We have to continue as a team to bring that consistency level for all four quarters.”

Maryland didn’t blow the doors off of this one out of the timeout, but it did enough to hold off Penn State’s second-half resurgence. Although the Terps were outscored 42-34 in the final 20 minutes, Miller’s team-high 19 points helped to sustain the lead and fend off the comeback.