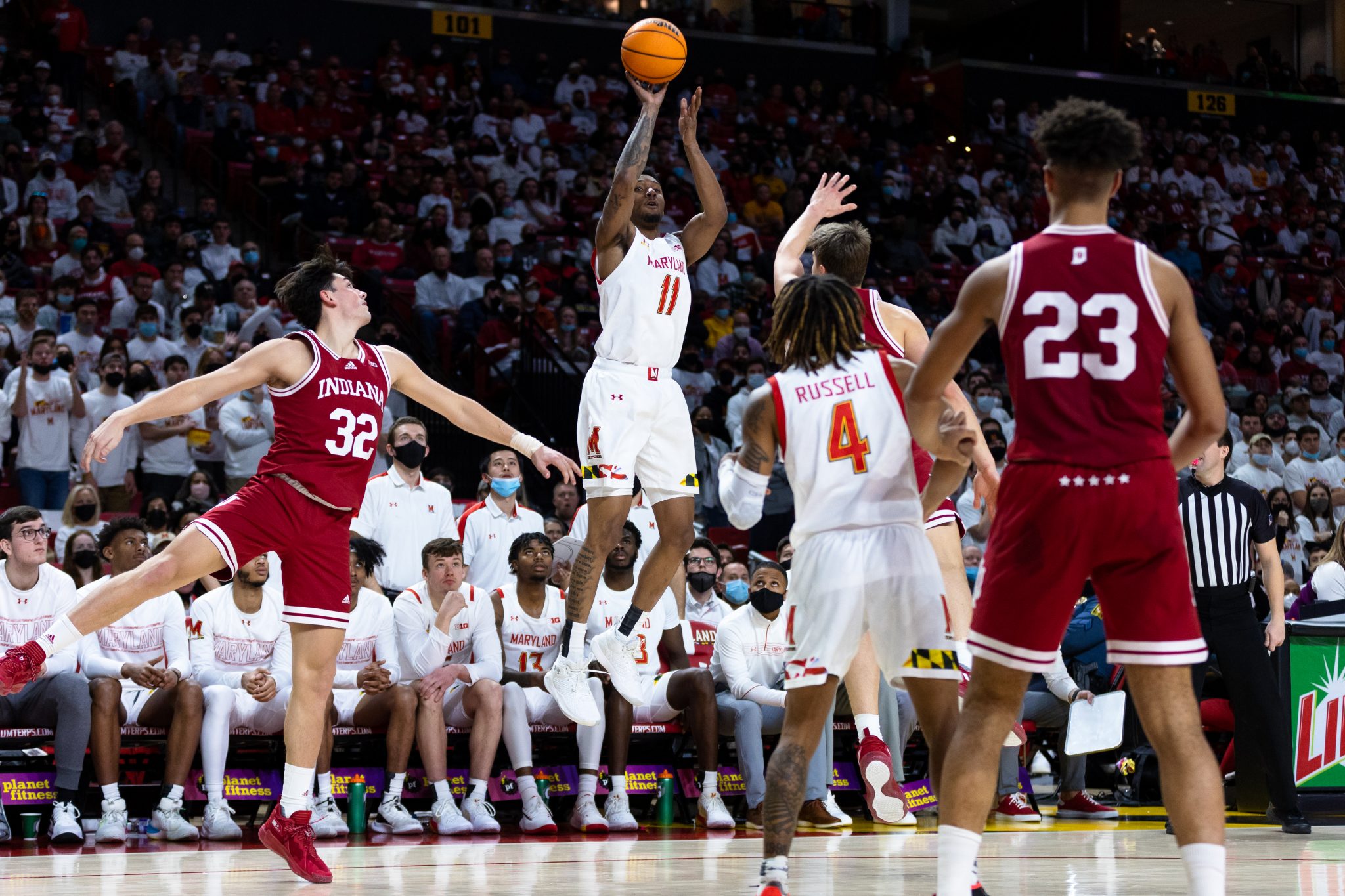 Eric Ayala took the first shot from deep — right in the basket.

Donta Scott went next — right in the basket.

Maryland men’s basketball was rolling in the opening minute of its contest with Indiana, a holdover from a commanding win over Rutgers just a few days prior.

Fatts Russell took a stab from deep — not so lucky.

The Terps were fresh off of a 48 percent three-point shooting performance and they brought in the same confidence, but none of the finesse.

Maryland ended up popping 27 shots from deep — tied for third-most in a game for the season — and only connected on six. A miserable 22.2 percent from three was no help for the Terps (11-10) as they struggled with finding good shots in a 68-55 loss to the Hoosiers (16-5).

“I’m glad the guys still have confidence in shooting the basketball, I want them to be confident, I want them to be aggressive,” interim head coach Danny Manning. “But, there’s also another fine line in ‘y’know what, I need to put my head down and get to the free-throw line.’”

Ayala and Russell were the two against the Scarlet Knights showing a particular affinity for taking three-pointers. And the two were on-point, combining to make 10-of-17 shots from beyond the arc.

Faced with a stout Indiana defense, that backcourt combination went 3-of-15, including eight misses by Ayala.

“We set our defense mainly for those two and Scott because they score the bulk of their points,” Hoosiers’ coach Mike Woodson said. “We kind of walked in there, I thought everybody who guarded Eric and Russell were locked in. They saw bodies. They weren’t able to see gaps where they could make plays off the bounce.”

It’s not to say that Maryland was unable to make a trey in an impactful situation.

The Terps started on an 8-0 run thanks to Ayala and Scott’s makes on the opening possessions of the game. What followed was a 13-0 run for Indiana — one eventually stopped by Russell’s first make of the night.

Back-to-back baskets from Jordan Geronimo kept the Hoosiers in front by multiple scores. However, Ayala hit his second three-pointer on a fastbreak assisting in seven unanswered points and an 18-17 lead for Maryland.

From there, it was five straight misses from three over the course of 10 minutes until Hakim Hart was able to nail one on a breakaway.

Hart began increasing the pace for the Terps, seemingly getting Maryland a chance at a comeback, but the haphazardly taken shots meant another long stretch without a make.

“[We need to] find those good shots,” Xavier Green said. “We don’t wanna settle for just threes all the time.”

But good shots became hard to come by. Indiana owned the paint throughout the game, surveyed by the tandem of Trayce Jackson-Davis and Race Thompson.

The Terps attempted to find success down low, giving Qudus Wahab a number of opportunities to work in isolation against Jackson-Davis. But, in a matter of minutes, it was clear he was going to have little fortune.

Maryland ended with 20 points in the paint — compared to the Hoosiers’ 36 — on 34 percent shooting from inside the arc.

“You go into each ball game and you take the shots that are dictated by the defense,” Manning said. “The defense dictated that we take some threes early on and we didn’t make them.”

Indiana forced the Terps into playing the game from out wide and they weren’t up to the challenge.

Maryland has shot 32 percent from three this season, however, in its previous three games the Terps have shot well above their average. It had been a bit of a hot streak for Manning’s squad over the previous few matchups.

Despite a trouncing from Michigan, Maryland shot 35 percent from deep and continued trending up with 36 percent in a win over Illinois.

The Terps were sent spinning back to Earth against the Hoosiers with no way of battling back from the outside or the paint. So with another tough matchup ahead, Maryland will need to find a way to get around a sound opposing defense and create the shots that push it to victory.