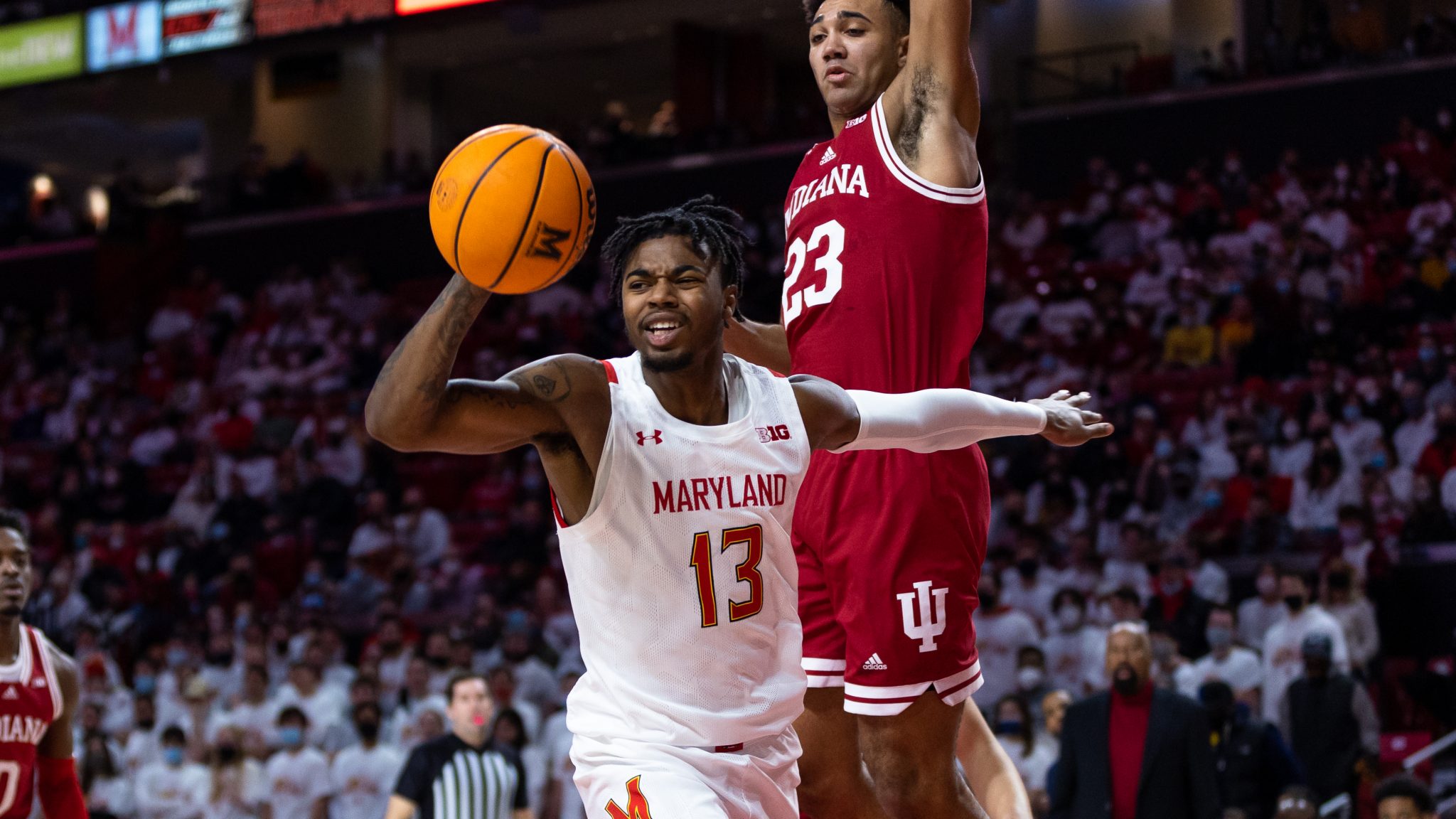 Indiana was piling on.

Maryland men’s basketball couldn’t stop the Hoosiers as the game ticked to a close. The Terps were already down by 14 when Trayce Jackson-Davis slammed a dunk over their heads. Even with over seven minutes to play, Maryland could not recover from such an offensive display.

The Terps’ deficit originated from a Hoosiers scoring run in the first half. After nine opening-half lead changes, they fell behind and the lead never shifted again.

What started as a dense white-out crowd dissipated with five minutes left to play. Hoosiers’ chants filled the air as the home court enthusiasm dwindled and the Terps sank deeper into a 68-55 loss.

The Terps swiftly put some distance between themselves and the Hoosiers to open the game. Eric Ayala and Donta Scott both dropped threes for the first baskets of the match to thunderous fanfare from a packed Xfinity Center.

Qudus Wahab sank a jumper to put Maryland ahead by eight. But the matchup didn’t stay that easy for interim head coach Danny Manning’s squad.

The Hoosiers cashed in on 13 unanswered points over the following five minutes. Race Thompson, Jackson-Davis, Xavier Johnson and Trey Galloway all broke through during Maryland’s scoring drought.

“We had some opportunities early on to make shots. Their defense is designed to give you those open shots and then make adjustments and we weren’t able to knock them down,” Manning said.

The scoreless streak was eventually broken by Fatts Russell from behind the arc. Since their strong three-point shooting performance at Rutgers, the Terps took more shots from behind the arc. They did not have the same level of success against Indiana, however, going 6-of-27 from three.

Maryland escaped the first half with five turnovers — a lower number for the team. But the Hoosiers were able to capitalize and turn the Terps’ giveaways into seven points.

Both teams tended to score in spurts in the opening half. After four points for Indiana by Jordan Geronimo, Ayala tried to bring Maryland closer to the Hoosiers’ 17-11 lead. But he missed his shot.

Xavier Green was below the rim with the rebound and successful hook shot to kick off another run for the Terps. Wahab made two free throws and Ayala splashed a three to take the lead for Manning’s squad again, 18-17.

The sides continued back-and-forth play with Geronimo breaking through for a jumper to take the 19-18 lead. Scott followed with two successful free throws. Thompson, Hakim Hart and Jackson-Davis traded layups and leads.

The streak was broken by an emphatic dunk by Wahab and a layup by Hart to give the Terps a three-point lead, 26-23.

But their lead didn’t last. Jackson-Davis and Galloway dunked in succession and the Hoosiers shot off on a run to end the half — they finished with 10 unanswered points and a 33-26 lead.

“[Jackson-Davis] is a great player. He’s very dominant and his left hand is. . . really good,” Green said. “We let him get a little too comfortable with his left hand and he took advantage of it.”

Maryland and Indiana entered the second half continuing the back-and-forth from before. Miller Kopp dropped a three and Russell answered with a jumper. Thompson made a jumper of his own. Then, Hart tore in.

He grabbed six points, broken up by another three by Kopp. Hart had six of the Terps first eight points in the half and he finished the game with 15, the team-high for Maryland.

The Hoosiers continued the game of runs after Hart’s stretch. Thompson clocked seven points in just over two minutes and Indiana’s lead was bolstered by an additional free throw by Johnson.

Maryland never recovered from the run. Shooting struggles became more apparent in the second half when Indiana broke away with the majority of the half’s successful shots. The Terps finished shooting at just 29 percent compared to the Hoosiers’ 43 percent.

However, Maryland found success from the free-throw line. They went 17-for-18 from the stripe, but didn’t get there enough times to close the gap.

“We have to do a better job of, when we’re not making jump shots, of getting to the paint and drawing fouls,” Manning said. “We got into the bonus early in that first half and we didn’t continue to attack the way we needed to.”

Manning’s squad began racking up fouls in an effort to stay alive. The Terps finished the game with 16 team fouls — Julian Reese had four and Russell and Scott had three apiece.

Maryland was also unable to remedy its turnover issue. Toward the end of the game, the Terps clocked three turnovers in less than three minutes and the Hoosiers finished with 15 points off Maryland giveaways.

“They were pressuring everybody, just making sure it’s not easy for us when we’re catching and stuff like that,” Hart said.

To make matters worse for Manning’s squad, Russell left the game with an apparent wrist injury and was unable to contribute at the end of the contest.

Indiana’s defense successfully stifled Maryland’s production on offense. The Hoosiers registered six blocks and limited the Terps’ presence in the paint. The defensive focus on Ayala and Russell smothered the team’s recent stars on offense and kept Maryland’s scores low.

It was a tight game to begin with, but unsteady shooting led to the Terps dropping a key Big Ten game that makes postseason play a massive long-shot.

“It was just one of those nights where shots didn’t fall,” Manning said.