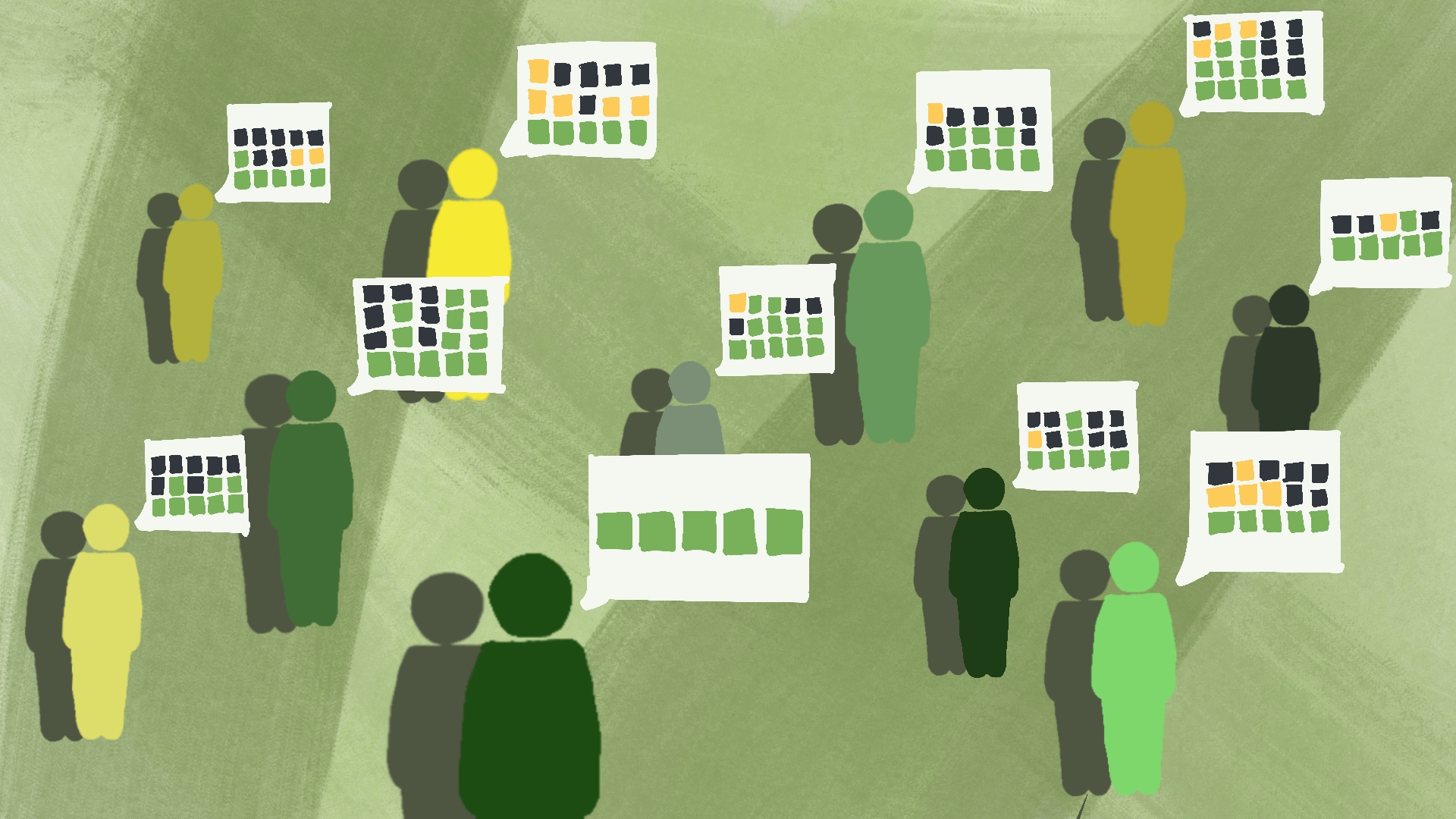 Wordle, the game created by British software engineer Josh Wardle for his partner who loved word games, has exploded in popularity in recent weeks.

Josh Horen, a senior family sciences and government and politics major at the University of Maryland, said he completes the Wordle every day as part of his morning routine. He plays the game alongside his morning cup of coffee, the time he also does The New York Times and The Washington Post crosswords. He discovered the game through his dad and he’s been stuck playing ever since.

When asked why he’s so drawn to the game, Horen said, “No push notifications. Don’t feel like my data is being mined. A lot of like-minded people can kind of get together and compete in a healthy way. Low stakes competition, instant gratification.”

Many players have found out about the game from cryptic posts on Twitter displaying rows of green, yellow and gray boxes — their solutions to the day’s Wordle. But how do you play the game?

For example, if the Wordle is “REPLY” and you guess the word “TRAIL”, the R and the L would show up as yellow boxes, while the other boxes would be gray. These results could be used to figure out words that have those letters or to eliminate other possible letters from the word.

Nicholas Galloway, a graduate student studying applied anthropology, said he has played a lot of Scrabble. His strategy for Wordle is to start with words that have a lot of vowels, such as “voila.” He likes to see if he completed the Wordle better than his friends and Twitter mutuals.

“You don’t really have to invest in it,” Galloway said. “It’s not time-consuming. You just do it, and you get to feel superior or inferior to your friends. I chase that high.”

The strategy used to play the game can tell a lot about a person — some may choose to eliminate as many letters as possible before guessing the word, whereas others may use the hints to guide them on their word choices. Some players might have a set first word to guess every day, whereas others might change up the word they use as their starting point.

The game also has a toggle setting that can be set to “hard” mode. This mode requires that any revealed hints must be used in subsequent guesses.

The game is currently accessible from a website, and there is no official app. However, many people have tried to coin fake versions of the game and charge money. Apple quickly removed any fake apps from the App Store.

Drew Fuentes, a senior environmental science and policy major, said she found out about the game at breakfast with her family. She now sends her Wordle results in a group chat every day and to her mom, to see who completed the Wordle better.

When asked if the game is going to stick around, Fuentes said, “I think it’ll probably die out. It just feels like another one of those little fads, which is fine.”

If you’ve finished your Wordle for the day and you’re looking for more, there are other versions of the game on the internet. Lewdle is one such spinoff.

“Lewdle is a game about rude words. If you’re likely to be offended by the use of profanity, vulgarity or obscenity, go play Wordle instead!” the website advises.

Other Wordle clones include Absurdle, Sweardle and Byrdle. All of these similar versions of the game allow for additional daily chances to play with different themes and featured words.