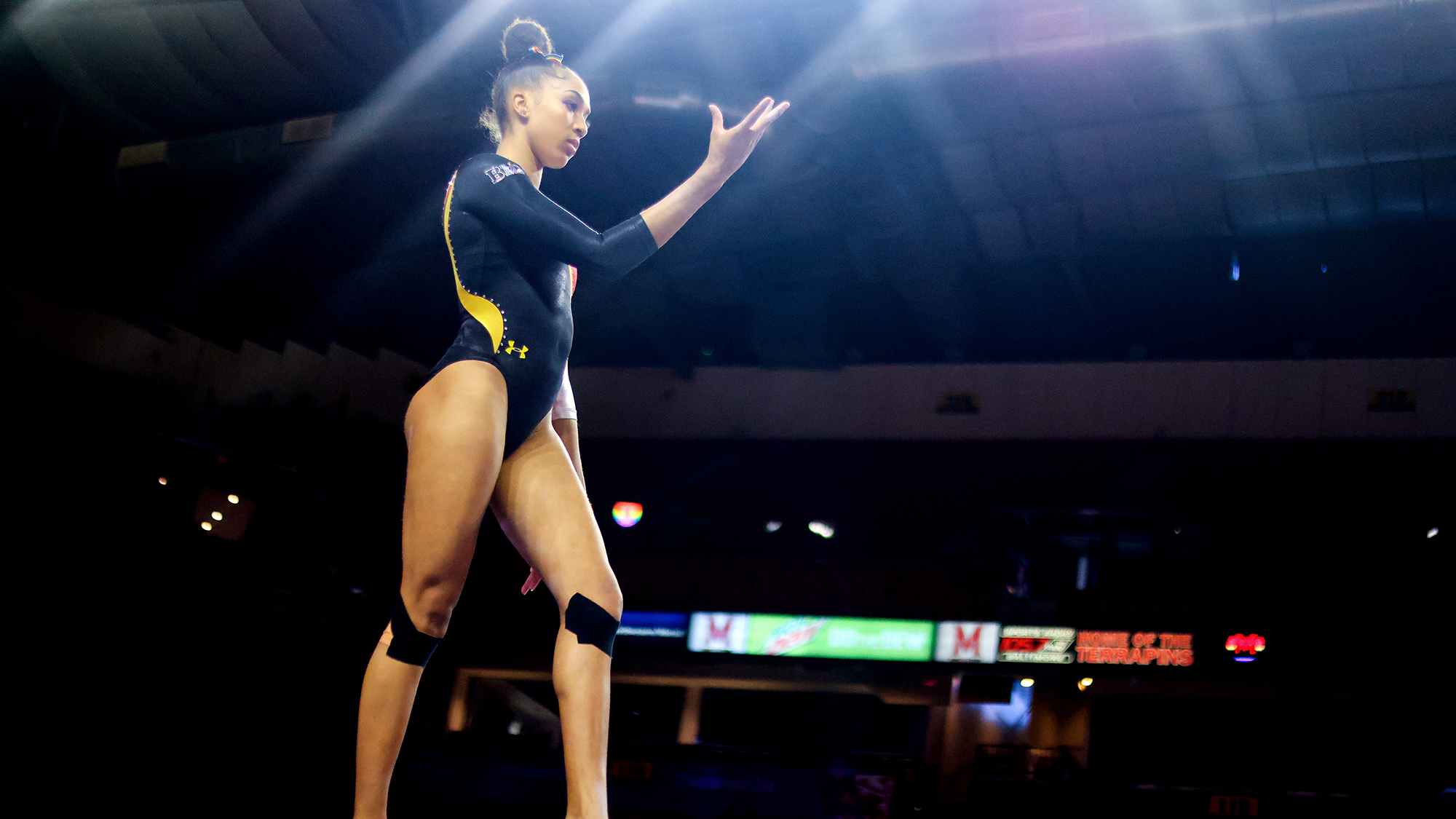 Audrey Barber scoring 39.150 in the all-around is nothing new — she’s been doing things like that since her freshman year. But with that score, the fifth-year senior and three-time All-Big Ten selection became one of the top five scorers in the history of Maryland gymnastics.

And with nine remaining regular season meets, all signs point to Barber becoming the top scorer in the Terps’ nearly half-century program history.

“Audrey’s career is incredible. I think she’s on pace to be the greatest gymnast in Maryland history and she’s a winner,” head coach Brett Nelligan said at the beginning of the 2022 season. “They always say if you want the ball in someone’s hand at the end of the meet, I’d want her to take the shot.”

It’s more than just Nelligan’s opinion supporting that claim, though. The numbers do too.

At the top of the all-time scoring list is 2005 graduate Rachel Martinez, who totaled 2,039.100 points. At Barber’s current pace, she’ll pass Martinez in seven meets, possibly doing so in six if she scores above her average.

Barber sees and hears that recognition, understanding the magnitude of praise and respect her coach has to have for her to make such a declaration about a current gymnast.

“I mean, it’s definitely something I don’t take lightly. To hear that, for that to be able to be possible, I kind of just attribute that to all the work that I’ve put in before college and in college,” Barber said. “If that happens, then I would be really grateful for that.”

Maryland had its eyes on Barber early, in large part due to assistant coach JJ Ferreira, who coached Barber on her club team for several years and informed Nelligan of her talent early on.

“I started coaching Audrey, I believe when she was 11 years old, 11 or 12,” Ferreira said. “It was just super fun getting to kind of watch her build her skills and her confidence and everything. We have a pretty long relationship together, which has been really fun.”

Even at such a young age, Ferreira knew that he was witnessing a star in the making.

Despite getting an early glimpse of Barber’s potential, Ferreira, who was on Maryland’s staff from 2010-2016 prior to leaving then ultimately re-joining the Terps following the 2019 season, wasn’t too involved with Barber’s recruitment to Maryland.

Both Barber and Ferreira ended up moving gyms, and once Barber was of recruit-eligible age, Ferreira was no longer coaching her.

[Maryland gymnastics’ season-opening comeback victory was the product of unity]

Things went well early and often for Barber. As a freshman, she competed in the all-around in each meet and earned All-Big Ten first-team honors in just her first year of college gymnastics.

It was more of the same her sophomore year, where she was named second-team All-Big Ten, and scored a season-high 9.900 bars when it mattered most at the Big Ten tournament.

As her junior season kicked off, it looked like Barber was taking the next step and establishing herself as one of the best gymnasts in the country. Within the first three meets, Barber posted career-high scores in three of the four events, including a program record of 9.950 on bars.
Unfortunately, though, those three meets would be Barber’s only ones during her junior season, as she was ruled academically ineligible for the remainder of the season.

And while Nelligan described it as a tough time, Barber manages to see the benefits of her experience when reflecting on her junior season.

“I think during that time, I realized that gymnastics isn’t your whole life, and there’s definitely a lot of outside factors. And I just think that in that year, I was able to kind of grow as a person outside of gymnastics,” Barber explained. “I’m thankful for that because it made me stronger.”

Barber’s return for her senior season was well worth the wait. She made her second-Big Ten first-team appearance, posting career-bests on vault, beam and all-around.

For much of the year, she thought it was her last. Then, the NCAA implemented an extra year of eligibility for college athletes whose sport was affected by the pandemic, and Barber took advantage of that opportunity.

“When I found out that it was a possibility [to return], I started talking with Brett [Nelligan] about it. And I think like, we were both really excited that it was something that I could be a part of — I could be a part of the team for another year,” Barber said. “It was just kind of amazing, because I think it was just what I needed and kind of what the team needed too.”

With that, there’s unfinished business.

On top of becoming the all-time leading scorer, which is almost inevitable barring injury, Barber has other goals. She’s aiming for a perfect 10.000, a score she once flirted with, finishing just 0.050 points away from the feat on bars. She also is targeting the program’s all-around record, one she’s come within 0.075 points of reaching.

Those who have known Barber for many years, such as Nelligan and Ferreira, prize the leader and human she’s grown into.

A quiet leader, Barber uses her experience to excel at helping settle her younger teammates’ nerves in the big moments.

Barber said she’s noticed different styles of leadership from various teammates throughout her five years in College Park, and took the things she liked most.

“Since a freshman, I’ve kind of been able to see all the seniors before me, as they’ve led the team. And each one of them, I’ve kind of seen little things that I wanted to pick up and keep a part of the team and be able to continue that in the legacy of Maryland gymnastics,” Barber said.

And while Barber aspired to continue the legacy of Maryland gymnastics as a leader, she is also on the way to cementing her own.