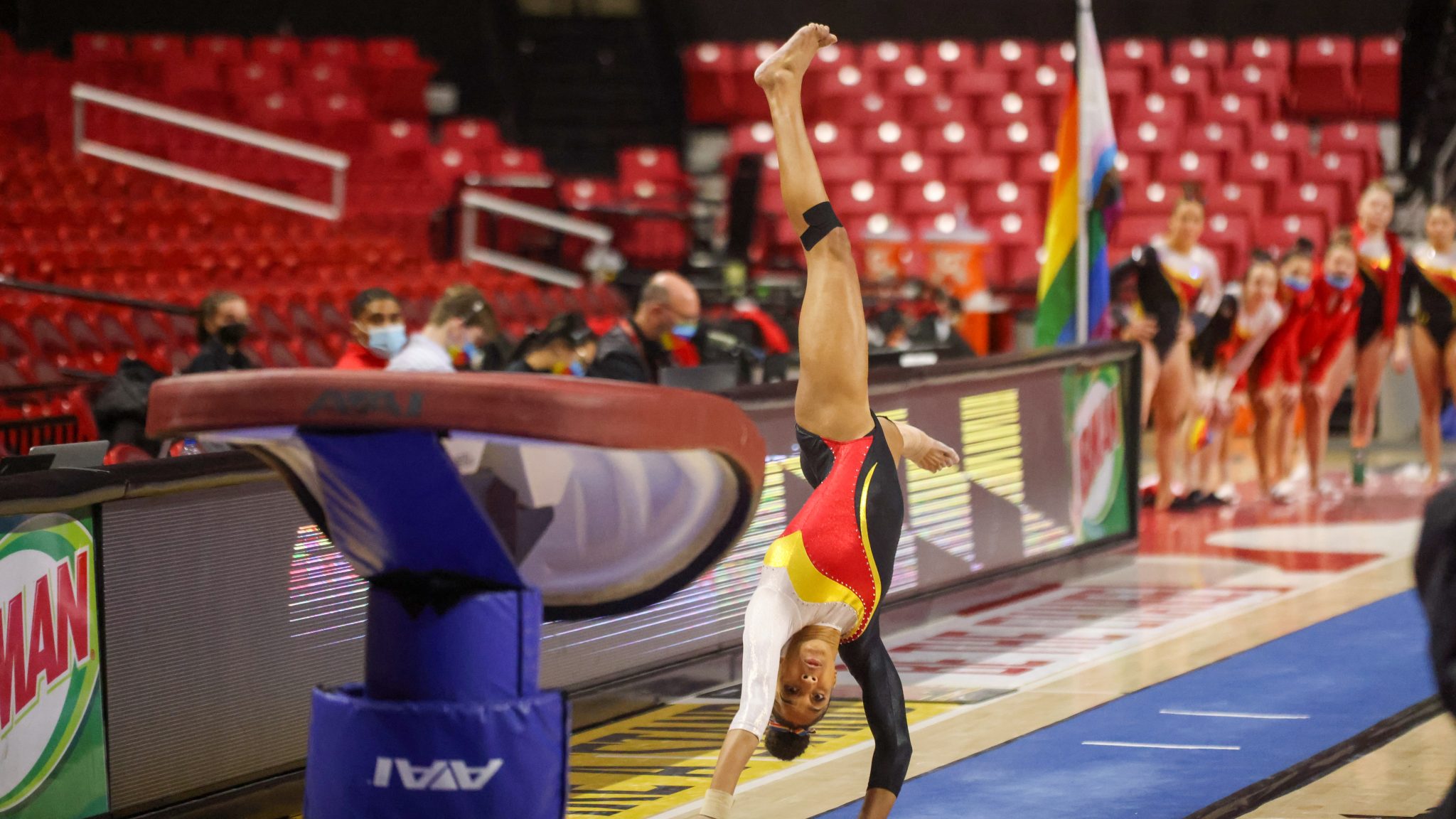 For the second consecutive week, Maryland gymnastics found itself in a nail-biter. Unlike last week, though, the Terps couldn’t edge out a win, dropping their conference opener to Rutgers (3-4), 195.550-194.925.

The Terps (2-1) started off strong, earning 49.000s in each of their first two rotations, vault and bars. With no scores below 9.775 counted in those events, Maryland put itself in a solid position entering the second two rotations.

There, despite improving by 1.775 points on beam, its third rotation this week, the Terps entered the final rotation trailing 146.475-146.600. On floor, Maryland’s final rotation, the Terps put up their only score lower than last week, tallying 48.450 points compared to its 48.600 in the Pitt Tri-Meet.

While Maryland struggled comparatively, putting up its lowest score of any event in the final rotation, Rutgers thrived, scoring a 48.950, with three gymnasts scoring 9.850 or above.

Despite the loss, the Terps ended up finishing significantly better than they did in the season-opener. They totaled 2.000 more points than the final mark in Pittsburgh while using the exact same lineup in three of four events, making only one change on floor.

“Overall, I think we took a big step forward, I was really pleased, because of the first half of the meet,” coach Brett Nelligan said. “You could see vault really cleaned up some of our landings, bars we really cleaned up too. And then beam obviously was a huge jump, right. We eliminated all the falls. But I think there’s still a lot of room to go on cleaning things up.”

[Maryland gymnastics’ season-opening comeback victory was the product of unity]

Of the things to clean up, Nelligan has floor at the top of the list, where the Terps scored 48.450 against Rutgers.

“We’re still in search of the right lineup [on floor],” Nelligan said. “We got a couple people out that we really kind of need to get back in. And we’re searching for the right combination to get us where we need to go on floor.”

Tayler Osterhout and Reese McClure are two pieces missing on floor — they were both sidelined in the Terps’ first two meets. Both are considered week-to-week, but Nelligan said that if McClure competes next week, it will likely be solely on beam.

Other key factors missing on floor are juniors Emma Silberman and Aleka Tsiknias. Silberman and Tsiknias suffered tears to their ACL and Achilles, respectively. While Nelligan hopes they’ll be back on floor soon, their contributions outside of floor cannot be overstated.

“It just really speaks volumes to their character, and their dedication and determination. And so for them to get out there and be so successful, it’s so rewarding,” Nelligan said. “They worked so hard to get to this point. I’m just I’m really proud of them”

Barber, who scored 39.150 in the all-around, has led the way for the Terps throughout the first two meets — more impressively, though, is that such a score is nothing out of the ordinary for her, and is just shy of her 39.198 average from last season.

Tsiknias, who’s competed exclusively on bars thus far, scored a 9.825, tying sophomore Elizabeth DeBarberie for a team-high in the event.

DeBarberie, who competed in four meets as a freshman on bars, has adjusted to a bigger role this year for the Terps. She matched her personal record of 9.725 on bars against Pittsburgh last week, but she smashed that against the Scarlet Knights, with the 9.825.

On top of her success on bars, DeBarberie competed in both vault and beam. She scored 9.775 and 9.725 respectively, both improvements from last week, where she put up 9.750 and 9.025 points.

“Last year, we saw the same things [from DeBarberie], but she had a lot of little nagging injuries,” Nelligan said. “We would use her and then the groin would flare up, and we’d have to rest her for a few weeks, then we’d try to use her again, and then it would flare up.”

Now, with her back to full strength, DeBarberie is showing everyone what she showed her coaches and teammates last year — a large aid given the other injuries the Terps are battling.

Despite the loss, the Terps have cause for optimism — their scoring improved from last week and several gymnasts stepped up while returning from injuries. Along with Barber’s consistency and Reese McClure eyeing a return soon, Maryland can leave its Big Ten-opening meet with confidence.