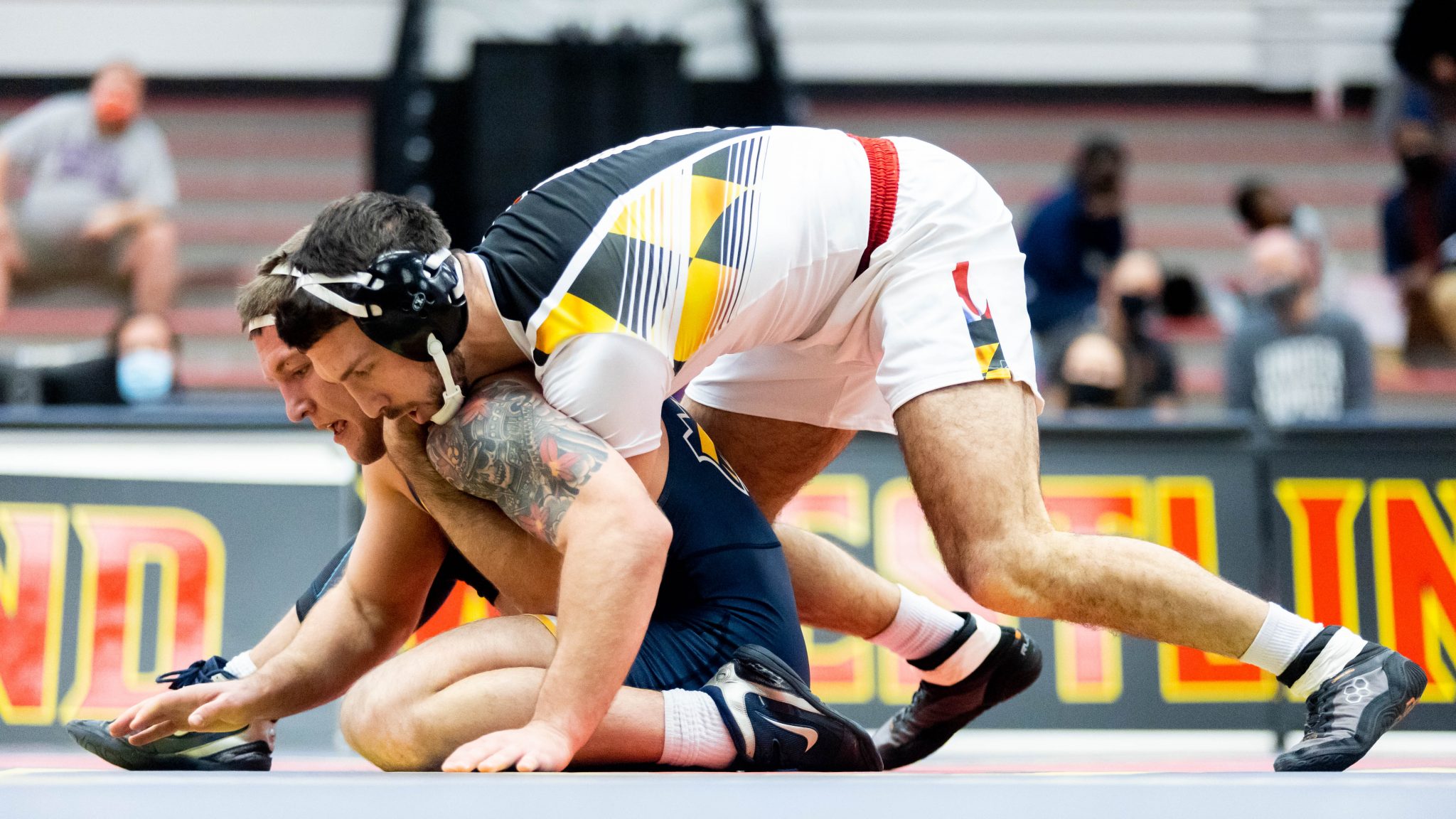 In the late seconds of the third period, No. 12 Kyle Cochran held a slim 3-2 lead on No. 8 D.J. Washington. Washington was pressing, looking for a desperate takedown, but Cochran held off all of Washington’s attempts to win by decision 3-2 and continue his breakout season.

But despite another win against a ranked opponent by Cochran and other valuable contributions by King Sandoval and Dominic Solis, Maryland wrestling fell short to Indiana, 26-12.

In the bout of the night, Cochran got an early lead over Washington in the first period. Using a scramble, he finished off a takedown before going out of bounds to go up 2-0. Cochran fought off Washington in the down position in the second period to pick up a key escape point.

In the third period, things got interesting after Washington got an escape of his own early, followed by a stalling call for Cochran to make it 3-2. From there, Cochran was able to block all of Washington’s attempts to steal a victory, and Cochran picked up an all-important win for his postseason resume.

“[Cochran is] learning to win,” Clemsen said. “I think that will pay off in March.”

Maryland was down 6-0 after Tommy Capul lost to Jacob Moran by tech fall to start the night. But after beginning the dual on the wrong foot, King Sandoval showed promise.

He was down 2-0 to Noah Gochberg at 133. Sandoval reversed Gochberg onto his back and was able to get the fall for his 11th fall victory of the season. Sandoval also gave Maryland its only lead of the night, at 6-5.

“We were hand fighting for a little bit, and I tried to headlock him, but I slipped on my way down. That’s how he was able to take me down,” Sandoval said. “I was able to recover and get back to my basics, get back to my style and the rest is history.”

At 174, Dominic Solis used three takedowns, including a double leg takedown in the third period up 5-3 to close out a 7-4 decision win over Nick South.

But that was it in the win column for Maryland on a night where they missed veterans Danny Bertoni and No. 31 Jaron Smith — the two were out of the lineup due to health and safety protocols.

“We definitely could have had more damage if we had all of our guys being healthy out there along with us,” Sandoval said. “But it’s not always going to be like that. So sometimes we just got to work with what we have.”

After Sandoval’s fall, the Terps’ early lead was short-lived. Will Berkowitz, who filled in for Bertoni, lost by fall to No. 30 Cayden Rooks as the first-period clock wound down. And the Terps were down again, 11-6.

That deficit got bigger as Michael North could not mount any offense against Graham Rooks and lost by decision, 5-2.

In his first career Big Ten start, Conner Decker got an early lead 2-0 on Jonathan Kerwin after a first period takedown. But Kerwin didn’t give up.

A reversal in the second period and a double leg takedown in the third period was enough for Kerwin to win by decision, 5-2, and extend the Hoosiers lead into intermission, 17-6.

In the second period, Kasper McIntosh got an escape and a takedown to go up 3-1 over Gaven Bell. In the third period, down 3-2, Bell went for a takedown but McIntosh countered and got a takedown of his own to win by decision, 6-2.

Kevin Makosky wrestled in Smith’s place, but he couldn’t fuel a miracle comeback. He fell by decision to Nick Willham as Indiana charged through the Terps’ lineup.

To end the night on a sour note, No. 31 Zach Schrader was upset by Jacob Bullock as Maryland squandered its best chance to pick up its first Big Ten conference win since 2016. Now, the Terps have a quick turnaround ahead of them and face a much tougher No. 6 Ohio State team on Sunday.

“We have to do a better job executing the things that we’re working on and developing in the [wrestling] room,” Clemsen said. “I saw us get beat in too many positions and give up to many positions that were directly working on a consistent basis and that’s frustrating.”