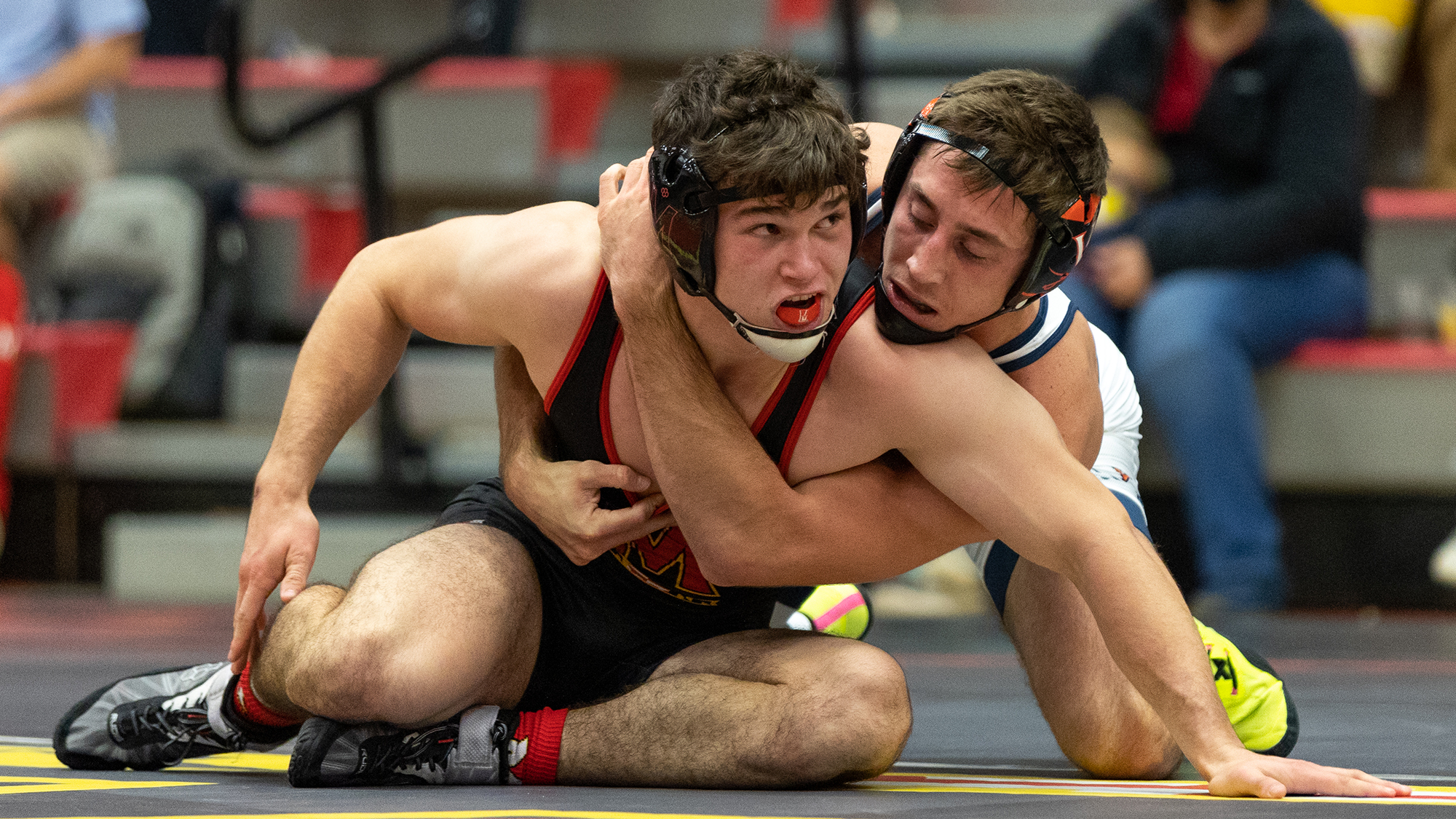 Down 6-4 with under 10 seconds left, things weren’t looking up for Dominic Solis against Michael Ferre.

But the Maryland captain kept his composure, drew a stalling call, and then went on the attack. He grabbed Ferre by his ankles and drove him to the mat for a takedown. Suddenly the 6-4 deficit turned into a 7-6 decision win in favor of Solis, and the Terps were up 15-14 instead of down 17-12.

That momentum swing by Solis helped Maryland beat Kent State 25-14 for their fourth win of the season. Later on against Chattanooga, Solis started another comeback by Maryland’s big four with a shutout decision victory over Carial Tarter. Solis’ success spurred Maryland to go 2-0 and sweep the day with a 24-14 win over the Mocs.

“For a young kid to have the poise to do that and put himself in a position to win was really good,” coach Alex Clemsen said. “When you start to get wins like that and experience like that. I think it’s gonna pay off huge dividends down the road.”

Solis’ momentum win against Ferre set up Maryland’s back three ranked wrestlers to ride the wave and close it out for the Terps.

No. 12 Kyle Cochran followed Solis and he rebounded from his loss last weekend to No. 1 Aaron Brooks. Cochran used an early takedown and controlled from the top position with 3:57 in riding time to keep Colin McCracken down on the mat. Cochran won by decision, 4-1, and extended the Terps’ lead 18-14.

After missing last weekend’s dual against Penn State due to an injury, No. 31 Jaron Smith returned to the lineup in a big way with a dominating 11-0 major decision win over Tyler Bates.

Smith used an early takedown and four near-fall points to blow the bout open early. He kept the shutout intact with 5:12 in riding time to make the score 22-14 and clinch the dual for Terps before they reached the heavyweights.

[Maryland wrestling shut down in Big Ten opener by No. 2 Penn State, 46-0]

“I always try to take as much pressure off the next guy as possible,” Smith said.

But despite the dual already being decided, No. 26 Zach Schrader picked up a stress-free  5-1 decision win over Jacob Cover.

After being down 14-12, The Terps’ big four put up 13 unanswered points against Kent State.

The pattern repeated itself in dual two — Maryland was down 14-9 and had its big four coming up. After Solis’ win the Mocs lead was cut down to 14-12.

Cochran used two takedowns and riding to beat Matthew Waddell by decision, 7-3, and reclaim the 15-14 lead for the Terps.

That set up Smith to make an impact, and he all but put the dual away for the Terps with a dominating 15-0 tech fall win over Nicholas Benton.

Smith ended the day outscoring both of his opponents by a combined score of 26-0.

“I know I have the opportunity to go out there and take advantage and get a tech or get a major when I can and that puts me in a better position,” Smith said. “Being the second the last match, I have a better opportunity to actually seal the deal for the team.”

The score was then 20-14, Maryland. Schrader only needed to avoid losing by fall to win the dual and clinch the meet for the Terps.

Schrader won by major decision, 13-3, over Grayson Walthall to secure the sweep and 15 unanswered points for Maryland.

“It’s really nice the team gets to rely on us on the backside and It always feels good to be a crucial component for the win,” Smith said. “[Solis is] the one that gets us started so when he finally goes out there and starts putting points on the board that’s great momentum for the rest of us to keep it going.”

But the Terps’ final four wrestlers couldn’t have snagged the wins without the earlier contributions from King Sandoval, Michael North and Danny Bertoni across both duals.

After throwing Kent State’s Brandon Fenton to the mat, Sandoval quickly got a takedown and then locked Fenton up for the fall victory.

In dual two against Chattanooga, Sandoval had an encore performance in him. He turned No. 21 Brayden Palmer onto his back for the takedown and then finished him off for the fall and the upset win. Sandoval got 12 points on the day for the Terps, just like he did in their tri-meet earlier in the season.

North, trying to shake off the rust from an early-season injury, drove Kent State’s Kody Komara to the mat. North got Komara on his back for the takedown and then finished the fall.

In dual two, Bertoni had enough riding time against Chattanooga’s Franco Valdes to force sudden victory, where he quickly blocked Valdes’s takedown attempt and spun him onto his back to get the takedown win by decision, 6-4.

After its worst loss of the season against No. 2 Penn State last weekend, Maryland’s top wrestlers responded to help pick up their fourth and fifth wins. Tomorrow the Terps will face two ranked teams, South Dakota State and Oklahoma, to finish off the Virginia Duals with a challenge.

“That’s how you win dual meets,” Clemsen said. “You need a collection of good individual efforts to have a solid team performance.”