Maryland wrestling shut down in Big Ten opener by No. 2 Penn State, 46-0 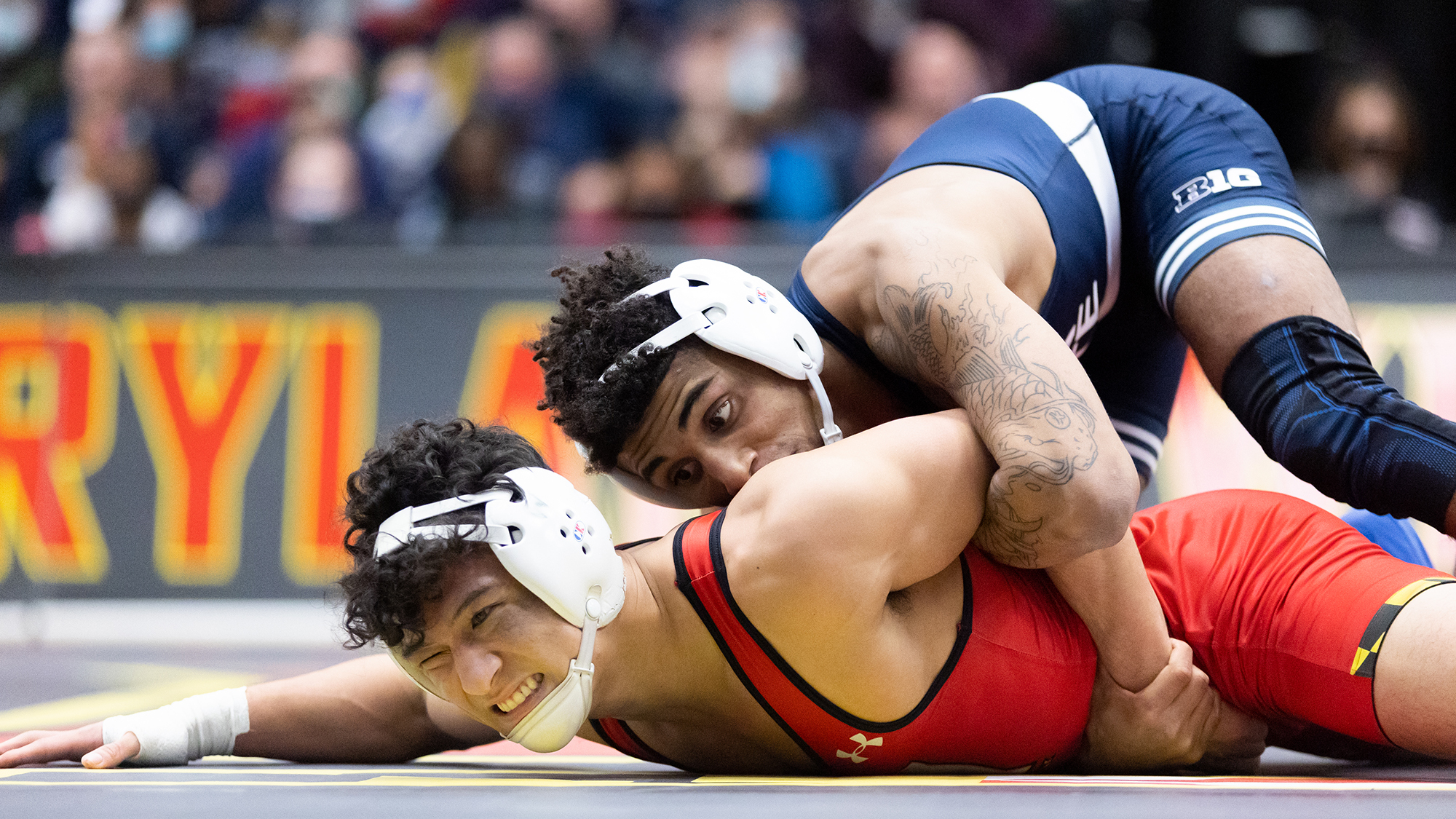 King Sandoval struggles on the mat during Maryland wrestling's 46-0 loss to No. 2 Penn State on Jan. 7, 2021. (Julia Nikhinson/The Diamondback)

When Maryland’s hottest wrestler — No. 12 Kyle Cochran — lost to No. 1 Aaron Brooks via major decision, 19-7, it all but confirmed the Terps would suffer a brutal loss.

In their Big Ten opener, Maryland was no match for No. 2 Penn State, falling 46-0 at home.

“One team wrestled a lot better than the other team,” coach Alex Clemsen said.

It was a familiar feeling for the Terps, with their last shut out loss coming at the hands of the Nittany Lions in February 2021.

In front of a packed Xfinity Pavilion, mostly filled with loud Penn State fans, it was a nightmare for Maryland from the very beginning. The Terps got little to no offense all night against a deep Nittany Lions squad.

Drew Hildebrandt performed a half nelson move and made quick work of Zach Spence, winning by fall. He was followed by No. 1 Roman Bravo-Young, who dominated King Sandoval with a technical fall win, showing why he’s the top wrestler in the 133 weight class.

Nick Lee, another top-seed in his weight class, then went back-to-back for Penn State, winning by technical fall against Danny Bertoni.

Michael North tried to give the Terps a spark in an early back and forth bout with No. 20 Beau Bartlett. North stayed in the bout with two early takedowns but Bartlett took him down to the mat to get the fall win.

“I just got caught in a bad position and didn’t fight hard enough there,” North said.

Lucas Cordio got an early takedown against Tony Negron in the first period, but Nergron took over in short order and won by major decision, 11-2.

Unlike its three-dual win streak, there was no miracle comeback for Maryland. By the time intermission was reached, the Terps found themselves down, 26-0

“When you have your opportunities against the best guys you’ve got to cash them in,” Clemsen said

The second half of the dual was more of the same. No. 24 Creighton Edsell easily dispatched Gaven Bell with over five minutes in riding time to win by decision, 7-1, to extend the lead to 29-0.

Despite three escapes by Dominic Solis, No. 1 Carter Strocci used three takedowns and an escape to beat him by decision, 8-3.

Then came the most hyped up bout on the night between Brooks and Cochran. But unlike his championship run in the Southern Scuffle, where Cochran dominated three-ranked opponents, Cochran wasn’t able to keep up.

Using over 3:27 in riding time and multiple takedowns, Brooks was in control from the opening whistle, downing Cochran.

With No. 31 Jaron Smith scratched from the lineup due to an injury, Kevin Makosy filled in against No. 2 Max Dean. But Dean had no trouble with his new opponent whatsoever, delivering Penn State its third technical fall win of the night.

Zach Schrader was the Terps’ final chance to avoid being shut out in the second ranked matchup of the night against No. 4 Greg Kerkvliet. But five takedowns and two near-falls by Kerkvliet clinched the overwhelming win for the Nittany Lions with a technical fall win over Schrader.

After an excellent month for Maryland, Friday was a step back and proved that it still has a long way to go as a program to become a contender in the Big Ten.

“We battled, but obviously not hard enough,” North said. “We got a lot of work to do here.”