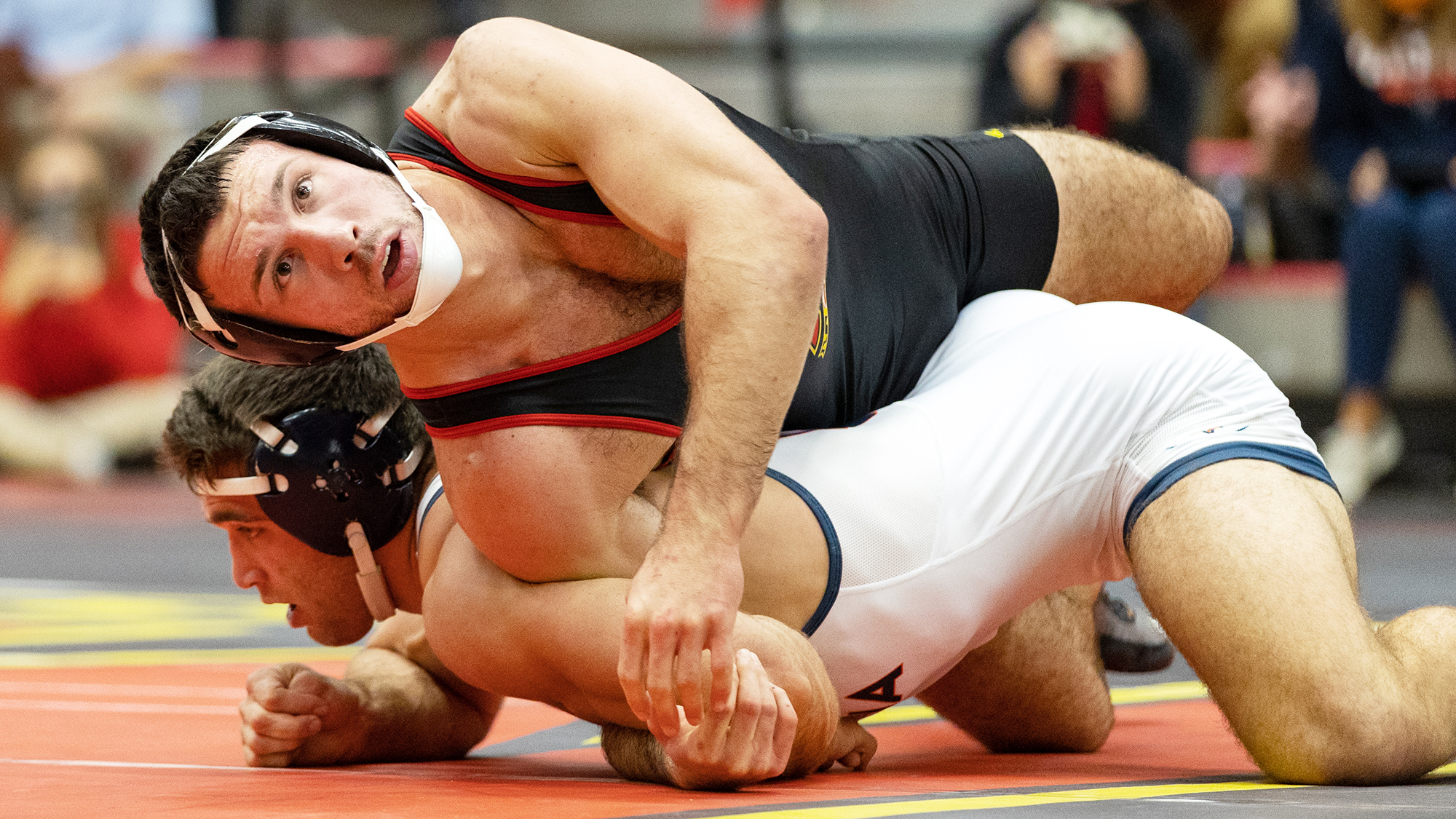 Just moments after the clock hit zero, the referee raised Kyle Cochran’s arm in the air, signaling he had just become a Southern Scuffle champion.

Cochran then flexed his left muscle to the crowd and went over to high five his coaching staff in celebration.

The moment then began to sink in for the Maryland wrestling captain that he had just pulled off his third-straight ranked win of the tournament, beating No. 13 Jon Loew (Cornell) by decision, 4-1, to win the 184-pound championship.

“When I got off the mat. I was really jacked up and happy with the way I performed,” Cochran said. “I’m definitely a little overwhelmed right now, but it feels good, and I’m happy that this happened.”

Cochran was the highlight of a successful Southern Scuffle tournament in Chattanooga, Tennessee for the Terps, where 16 Maryland wrestlers competed.

Entering the third period trailing 1-0, No. 32 Cochran had over one minute in riding time accumulated and was in the down position to start the period. He quickly got an escape to tie it up and still had the advantage of riding time in his favor.

Loew went on the attack looking to take the lead, grabbing Cochran by his leg and looking to grab his other leg to finish a potential takedown. But Cochran fought off Loew — created a scramble — and got a takedown that clinched him the championship as he rode out the rest of the period.

“When I was on the edge of the mat and [Loew] almost had both of my legs. I stuttered for a second because I almost thought I gave up two [points],” Cochran said. “But then I realize that I could scramble out of it. So I rolled his leg over my head, and I ended up getting two [points] out of it.”

Cochran faced No. 14 Hunter Bolen (Virginia Tech) in the semifinals and took a 5-1 lead into the third period with two takedowns. In the third, a technical violation and a stalling call on Cochran kept the score tight. But he held a frustrated Bolen contained with over 2:50 in riding time and won by decision, 6-4, to move on to the championship.

On Saturday night, Cochran faced No. 15 Jeremiah Kent (Missouri) in the quarterfinals and dominated from the beginning with a statement 5-0 decision victory behind a takedown, reversal, and over two minutes of riding time.

Against Loew, Bolen and Kent, Cochran didn’t surrender a single offensive point — largely due to his execution in the top position that kept all three contained on the mat.

“[Cochran] is a beast on top,” coach Alex Clemsen said. “I think that the word [is] kind of getting out on that, and there’s no secret that people are hesitating to choose bottom on him.”

In other results around the tournament for the Terps, Jaron Smith placed seventh in the 197-pound bracket after beating Garrett Joles (Minnesota) by fall. After losing in the Round of 16 to No. 22 Tanner Sloan (South Dakota State), Smith fought back in the 197 consolation bracket to pick up quality wins and finish 4-2 in the tournament.

Maryland also saw some strong results from two wrestlers in its talented freshman class, with Ethen Miller and Jaxon Smith reaching the quarterfinals in their respective weight classes.

No. 29 Zach Schrader reached the quarterfinals in the heavyweight bracket, going 2-2 in the tournament, to continue building on his potential postseason resume heading into Big Ten play.

The Terps started off 2022 in a big way, with two placers and a 13th overall finish in team standings in one of the top tournaments in the country.

Cochran’s breakthrough performance will help make a name for himself in the 184 weight class moving forward. It also helps Maryland as it looks to cement themselves as a growing program.

“I’m really proud of [Cochran],” Clemsen said. “It’s good for our program not just for Kyle, for our program, for all of our kids to see this kind of a result happen.”