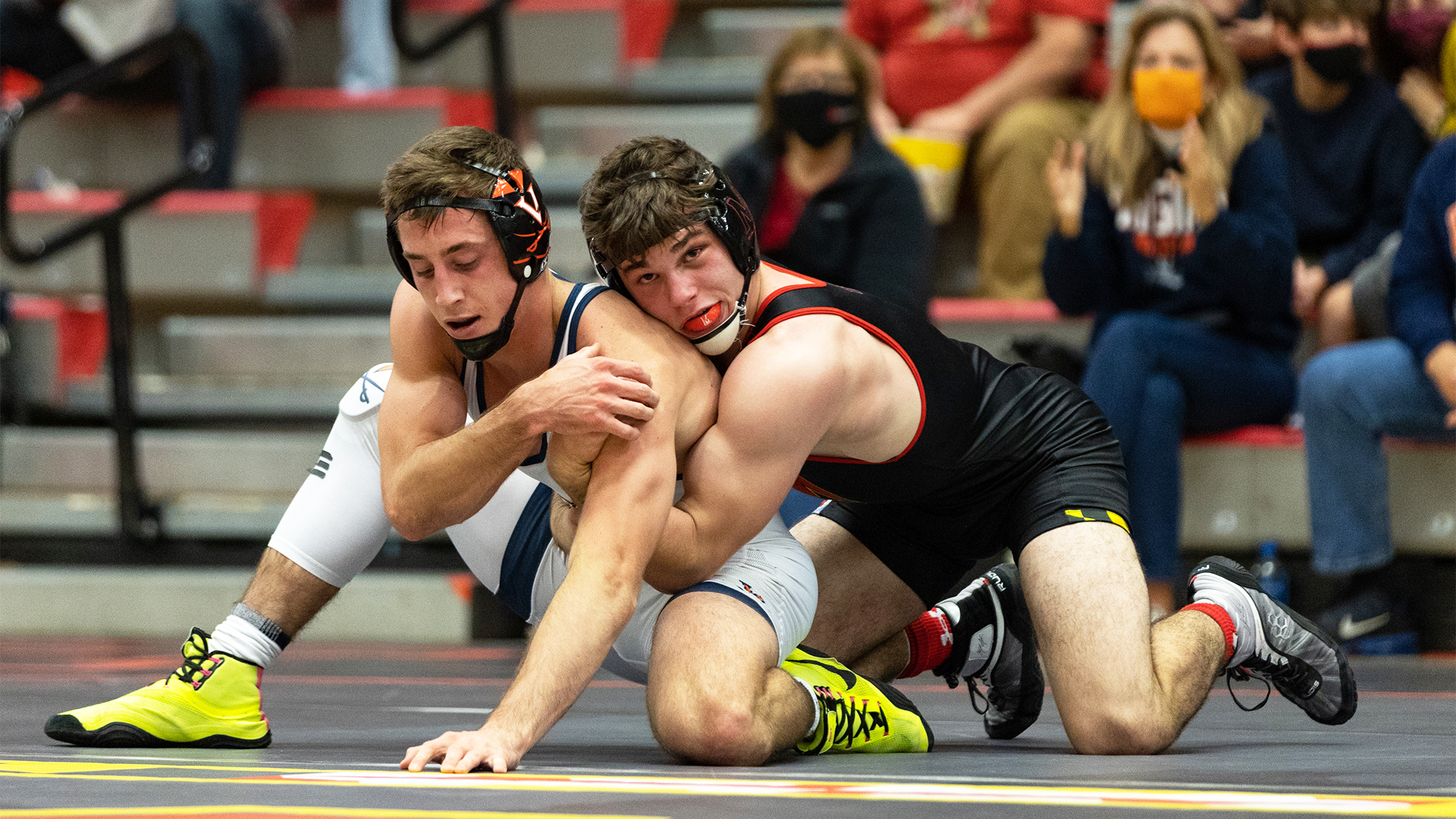 Zach Spence matches up against Patrick McCormick during Maryland wrestling's 24-9 loss to Virginia on Nov. 12, 2021. (Cam Andrews/ The Diamondback)

It looked like Maryland wrestling had run out of magic.

Down 16-6 entering the 174 bout, the Terps were hoping for another miraculous win after two comebacks in last weekend’s tri-meet sweep of Drexel and Duke.

Fortunes seemed bleak, but Maryland (3-2) had one more trick up its sleeve, winning four straight bouts against Navy — all starting with a late rally from Dominic Solis.

Solis came out of the gate early with two takedowns for a 4-1 lead. However, five unanswered points by Shane Finney seemed to put the bout all but away. That was until Solis got two stalling points awarded by the referee in the final seconds of the third period to tie things up 6-6.

Needing a sudden victory to decide the bout, both wrestlers were in a scramble, looking for an opening. Eventually, Solis fought off Finney and got the takedown to win by decision 8-6.

It was not obvious then, but Solis had planted the seeds of a third-straight comeback with his fifth win on the season that energized the Terps when they needed it. If the bout went the other way, Maryland could have been staring at a loss against its in-state rival.

Instead, Solis gave the Terps’ back-end trio a chance in a familiar spot to pull off a three-peat.

“If I do my job, I know that they’re going to do their jobs,” Solis said.

Coach Alex Clemsen has preached to “do your job” in different ways to his group. This time around, Kyle Cochran’s job was not to start a comeback, but to keep it going, facing off against No. 25 David Key.

Cochran dropped Key to the mat for a takedown for an early 2-0 lead, but two escapes from Key tied it up. Another takedown by Cochran gave him a 4-3 edge to the third period. It was all he needed.

In a dominant third period by Cochran featuring an escape, a takedown and a riding time point lead to an 8-3 decision that cut the Navy lead to 16-12 and gave Cochran his eighth win of the season.

Cochran’s win passed off the next step of the comeback to Jaron Smith, taking on No. 24 Jacob Koser in the 197 bout. Smith was in control for most of the matchup until Koser tied it up, 6-6, with a takedown with under a minute left in the third.

Thus began a scramble with Smith looking to hold on as Koser pressed for the winning points. However, Smith (7-2) held on and, because of his riding time, won by decision, 7-6.

“[Smith] wrestled really smart,” Clemsen said. “[Navy] wanted to cut him and [Smith] reached back and found a leg, created a little bit of a scramble.”

Smith’s win set up No. 32 Zach Schrader — the Terps’ version of Mariano Rivera, according to Clemsen — to close out against No. 33 Riley Smith with the dual on the line.

It was a stalemate through the first three periods, leading the bout into sudden victory.

“I was just letting [Smith] make a mistake,” Schrader said. “I actually lost against [Pittsburgh]…by doing that same thing, by kind of shooting in a little bit too soon in overtime, so now I kind of learned that lesson.”

The Terps’ big-four of Solis, Cochran, Smith and Schrader are now a combined 29-9 on the season.

Even with three-straight comeback wins against quality opponents, Maryland is not satisfied knowing Big Ten play is on the horizon.

“Just because we win three dual meets doesn’t mean we’re all of a sudden good,” Clemsen said. “We still have a lot of work to do.”