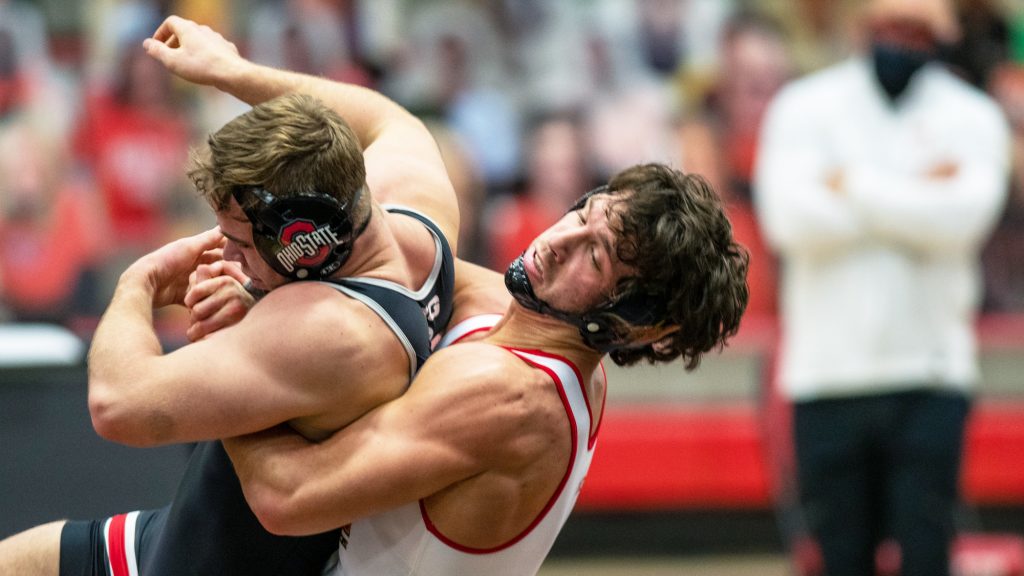 When Kyle Cochran stood atop the podium after winning the Southern Scuffle’s 184-pound championship, the Maryland wrestling captain had just pulled off the biggest win in his career.

Cochran said he has received a lot of praise and support for his performance from teammates, friends, Maryland alumni and his community at home in Paramus, New Jersey in the days since the tournament.

“They’ve been awesome,” Cochran said. “It just feels really good knowing that I have a great support system and I have a lot of people rooting for me.”

Cochran is currently in the midst of a breakout season, moving up to No.12 in the latest InterMat rankings for the 184-pound weight class. Sporting a 14-1 record on the season, he was named the USA Wrestling Athlete of the Week and the Big Ten Co-Wrestler of the Week.

He’s the first Terp to win a Big Ten Wrestler of the Week honor since Jaron Smith in Feb. 2020 and has been a key contributor to the Terps’ success this season as they look to establish themselves in a loaded conference.

“All the awards that I’m getting are all things that I’ve always dreamed of when I was younger,” Cochran said. “So it’s really a blessing that I’m finally getting noticed.”

Winning awards do not come easy in a wrestling league as prestigious, deep and talented as the Big Ten is.

Cochran going 5-0 in one of the top tournaments in the country while dominating three ranked opponents — No. 13 Jonathan Loew of Cornell, No. 14 Hunter Bolen of Virginia Tech and No. 15 Jeremiah Kent of Missouri — without giving up a single offensive point has drawn him and his team more attention from the wrestling community.

“To be a part of the process of putting Maryland on the map and finally getting people to open their eyes and be like, wow, they’re here to stay, and they’re here to grow and climb up the rankings just feels really good,” Cochran said.

Cochran is no stranger to earning his name. In high school, he said he wasn’t well known early in his career. But once he started standing on the podium — becoming a New Jersey state champion in 2016 followed by a runner-up finish in 2017 — he got noticed.

Now Cochran is doing the same thing in his senior year of college and said he’s climbing up after “I dug myself into hole.”

While college wrestling may just be starting to take notice of Cochran and who he is as a wrestler, coach Alex Clemsen knew from the beginning of his tenure the kind of talented wrestler he had on his hands.

“I’ve said since I got to College Park, I’ve thought Cochran was pretty damn good,” Clemsen said. “And I’m glad we’re starting to see the kid I thought he was capable of being.”

But even with his recent success, the road to the Big Ten Championship in March will only get tougher for Cochran going forward, starting Friday in the Terps’ conference opener against Penn State.

Cochran will face No. 1 Aaron Brooks, an All-American and Big Ten Champion. The attention of Friday’s dual will surely be on this high profile 184 bout and top-15 matchup.

It will also be a rematch from last season, when Brooks won by major decision, 18-5. But Cochran won’t put any special meaning behind the matchup.

“I’m gonna wrestle my opponent this weekend the same way that I wrestle everybody else,” Cochran said.

Despite the impactful championship win, Cochran has more goals he’s looking to check off the list in what could be his final season.

Cochran managed just a 2-3 record in last season’s Big Ten Championship, unable to earn a place. But with momentum behind him, Cochran is aimed at new heights with the Terps.

“Getting on top of that podium this past weekend feels like the first step to accomplishing all the other things that I want to accomplish this season,” Cochran said.