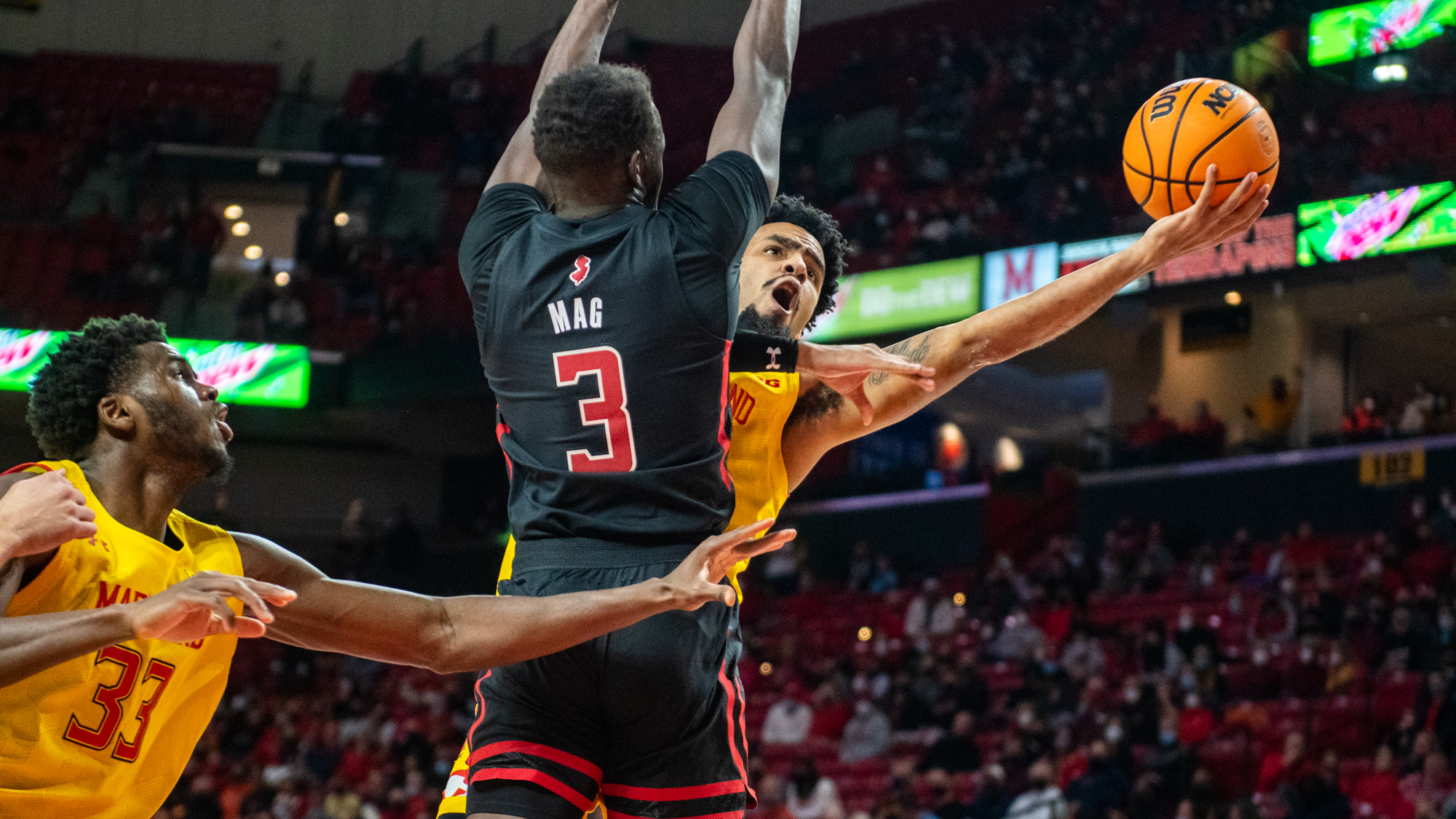 Ron Harper dribbled the ball behind the three-point line. As the shot clock ticked down, Harper shot the ball and it effortlessly swished through the net.

Maryland men’s basketball was disheartened by Harper’s clutch shot and it struggled to regain a lead following his basket.

The Terps got ahead early on but the second half was their undoing, in no small part due to Harper’s shooting performance. He posted a game-high 31 points — 18 coming from behind the three-point line.

Harper was the nail in Maryland’s coffin. The Terps fell behind and eventually lost to Rutgers, 70-59.

“He’s a talented basketball player within the flow of the game,” interim head coach Danny Manning said. “He made some tough shots, got to the free throw line and a few of those shots he made were contested fairly well.”

Maryland opened the match with a rare early lead. The Terps were more effective in almost every facet of the game from recent Big Ten matchups.

Seven Maryland players were credited with a steal in the first half and their defense played with more intensity.

The greatest area of the Terps’ improvement came from playing in transition. The Scarlet Knights had 11 turnovers in the opening half and Maryland was able to turn them into 18 of their 38 first-half points.

“I thought we had really good, active hands defensively, created some deflections and gave us a chance to get out in transition,” Manning said.

Julian Reese made his first career start in the place of Qudus Wahab. He grabbed a steal and pulled down a team-high four rebounds in the first half. However, Reese’s shots weren’t falling and he went 0-3 from the field to open the game.

Reese’s first points from open play came nearly four minutes into the second half. As he was falling to the ground, Reese hooked a shot under the net and into the basket, sending the Xfinity crowd into a frenzy.

Rutgers played a physical first half and Manning’s squad was able to capitalize on that. After a lackluster free-throw shooting performance Wednesday against Northwestern, the Terps woke up at the foul line, going 13-15 in the first half.

The Scarlet Knights finished the game with 19 total team fouls. The Terps drew three offensive fouls and contributed to their high giveaway count.

And although Maryland took the lead early, they weren’t without their inconsistencies to start the game. There were a few defensive miscues that gave the Scarlet Knights easy points.

Six-foot-eleven Clifford Omoruyi was left wide-open in the paint and he triumphantly dunked for two points. On Rutgers’ following possession, Harper. dropped a three from the corner to give the Scarlet Knights their first lead of the game.

For the most part, though, Rutgers allowed the Terps to exist with a lead rather easily. With 13 points from the foul line, Maryland left the court with a 38-27 scoreline at halftime.

“I thought our first half was pretty solid, we did some good things. We moved the basketball, we shared the basketball,” Manning said. “I thought we did a good job of getting to the free throw line and that gave us a chance to go into halftime with a lead.”

The second frame was a bit more challenging for the Terps. The Scarlet Knights’ play was beginning to come together.

The frequency of fouls evened out and both teams had three fouls just over halfway through the second. And with Maryland going to the free throw line less, its point production decreased rather dramatically.

The Terps’ defense also seemed worn down in the second half. The Scarlet Knights were able to regain a lead with over nine minutes left in the game — doing so with a 10-0 scoring run. Omoruyi contributed a layup and Geo Baker sank a jumper to add to Rutgers’ recovery.

But the true star of the Scarlet Knights’ run was Harper. He dropped two consecutive threes, the first of which gave his team the lead, 46-45.

“We should watch our own mistakes and see what we should be better at and where things took a turn,” Eric Ayala said.

Rutgers’ streak was snapped by Donta Scott, who dropped a clutch three.

Points were hard to come by for almost two minutes when Ayala splashed a three of his own to reclaim the lead for the Terps, 51-49.

Ayala and Scott combined for 15 points from behind the arc and Ayala continued his high-production streak.

Harper’s showing only grew stronger as the game wore on. He extended his team’s lead with a clutch bucket from deep as the shot clock expired.

A final dagger from Harper in the corner sealed the deal as Maryland couldn’t match his immaculate second-half three-point shooting that gave him 20 points in the final period.

The loss brought the Terps to 1-5 in the Big Ten with a road clash with Michigan on tap for Jan. 18.

“They kinda made certain runs throughout the game and they got good stops on us defensively,” Ayala said. “As a team we gotta adapt better, I feel like when things take a turn or when teams go on runs we just gotta take them and not get defeated by it.”