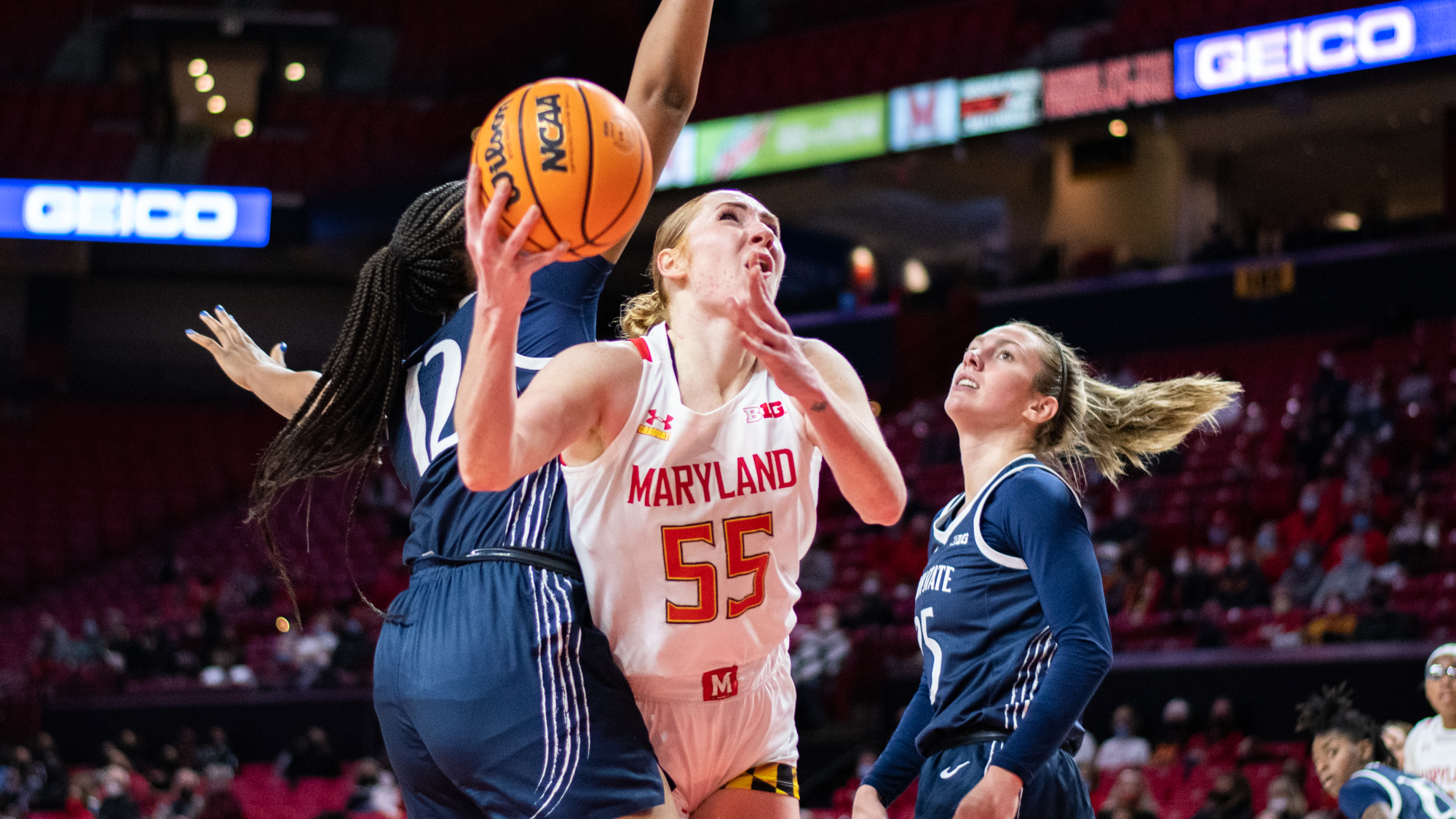 Maryland women’s basketball began to gain some separation in a tightly contested road test against Minnesota thanks to its ability to capitalize on its opponents turnovers.

With 5:09 remaining, Chloe Bibby picked off a pass from Sara Scalia to earn a tip to the line  that extended her squad’s lead to 14 — the highest it had been all day. On the next possession, Angel Reese scored following a travel violation by the Golden Gophers and the Terps never looked back.

“We were just trying to have energy and effort,” Bibby said. “We want our defense to create our offense and I think at times we did it in our transition and that’s what really got us going.”

Coming off of a 106-point outing, the offense had moments of befuddlement, while the defense struggled mightily to corral the play of Deja Winters and Scalia. But, despite an up and down performance, 22 points off of turnovers made light of the inconsistent day where Maryland downed Minnesota, 87-73.

“I think we’ve been really disruptive these last couple games,” coach Brenda Frese said. “You see how dynamic we are with our length and athleticism. As we get in better and better shape, this is where we’re going to be as a team.”

Maryland had its way with the Gophers inside in the early going. Bibby and Reese supplied the thunder down low, while Diamond Miller continued to distance herself from her early season knee injury with 10 first-quarter points.

While Minnesota was able to keep it close by the first timeout, efficiency from the Terps was unmatched as they shot 63 percent from the field compared to the Gophers’ 33.3 percent.

Three Maryland players went perfect from the field in the opening quarter, including Mimi Collins, who has struggled offensively, but was able to supply five early points.

Winters and Minnesota looked to combat the Terps’ hot shooting with some precision shooting itself in the second quarter.

Winters drilled two threes to start things off, cutting the deficit to four. She finished her torrid shooting quarter with 12 points off of four three-pointers, sparking more head scratching on the defensive side for the Terps.

As the Gophers trended upward, the Terps went downward. The teams just about traded shooting clips in the second quarter as Maryland shot 37.5 percent from the field compared to Minnesota’s 50 percent.

With the Terps holding on to a five point lead at halftime, their defense needed to find some answers.

“I thought our second half was where it was at,” Frese said. “We changed up our defense, we were really unselfish when we’re sharing the basketball like we were …  [and] I thought our defense helped to go to our offense.”

It wasn’t a promising return to the court as Scalia bookended a 7-0 run for the Gophers to make it a two-point game. Out of a 30-second timeout, the Terps continued to falter as Winters then cut it to a one-point deficit with her sixth three of the matchup.

Defensive pressure from Maryland began to pay dividends in the final four minutes of the third, however, with the Terps embarking on an 8-0 run aided by two Minnesota turnovers.

Following two free throws from Ashley Owusu, Miller capitalized on a lost ball turnover from Alexia Smith to extend the lead to seven. Then, out of a 30-second timeout for the Golden Gophers, Owusu quickly found the bottom of the net off of a traveling turnover by Scalia.

The Gophers’ zone defense still gave Maryland some trouble, but the Terps defense stepped up as the clock wound down in the quarter to enter the fourth with a seven-point advantage.

The first half of the fourth quarter went in Maryland’s favor, 18-11. Shyanne Sellers made a big impact on both ends after a quiet three quarters, while Reese continued to produce with a conversion on an and-one opportunity that kickstarted a crucial 14-5 run.

Two free throws by Scalia brought the deficit back down to single digits, but a three from Katie Benzan at the 5:24 mark marked the beginning of the end.

Bibby scored a game-high 23-points to help the Terps secure their second consecutive victory. Minnesota hung around, but the turnovers began to mount up and became too large of a hurdle to overcome.

“We’re trending up,” Owusu, who had eight assists and zero turnovers, said. “A key part of that is transition. That starts with me just as a point guard being able to get the ball out of bounds and just being able to run the ball down and not let them set up their defense.”

A tough matchup against No. 9 Michigan awaits Maryland.