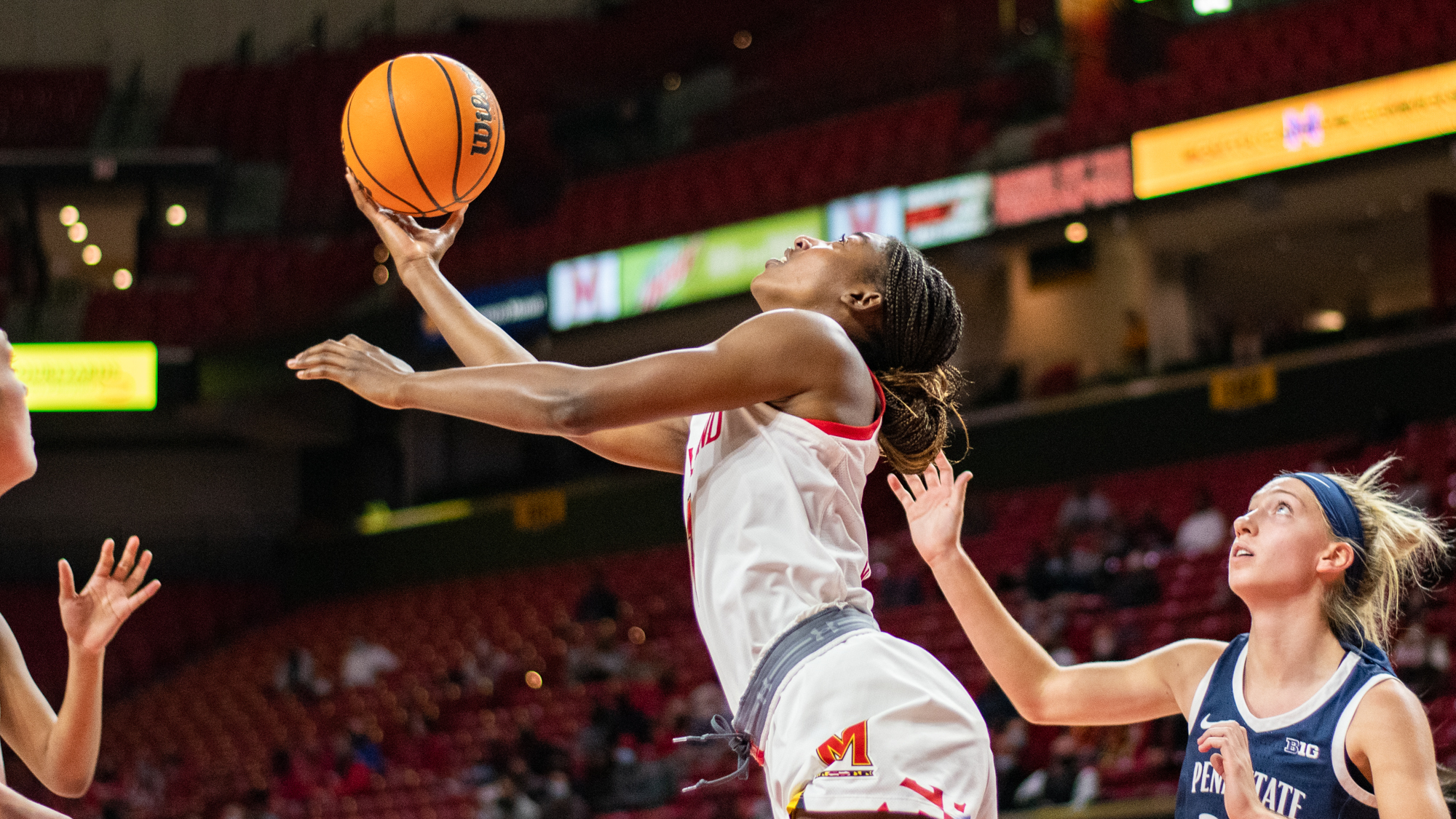 Ashley Owusu started the play and Diamond Miller finished it.

Early in the first quarter, Owusu intercepted a Penn State pass. She kept the ball inbounds with a one-handed pass to Chloe Bibby, who found a streaking Miller for an easy layup.

The pair powered Maryland women’s basketball, as the Terps defeated the Nittany Lions on Thursday evening, 106-78, as the duo combined for 44 points in front of a home crowd.

“We set the tone right away,” coach Brenda Frese said. “We were really aggressive and in the passing lanes. And then I thought offensively, we really pushed tempo, we were really unselfish, moving the basketball and that’s really what Maryland basketball looks like.”

Miller joined the starting lineup for the first time this season and registered a season-high 24 points on 10-of-13 shooting. She found herself surrounded by a swarm of navy blue jerseys under the rim but took one dribble, turned to create space, and smoothly tossed a layup over her head.

Miller came down the floor, and after getting lost in Penn State’s defense, she found herself open in the left corner. Owusu, who held the ball on the opposite corner, launched an overhead feed right into her teammate’s hands for an open three-pointer that Miller drained.

The Terps’ offense, which hasn’t been quite as dominant as it has in previous seasons, saw the pieces click into place against the Nittany Lions. They shot 54.8 percent and made 11 three-pointers, scoring at will in the first half en route to a 53-28 halftime advantage.

“I thought the ball movement was terrific,” Frese said. “I mean we haven’t played like that in a long time.”

A game after it had 19 turnovers in its Jan. 2 loss to the Hoosiers, Maryland limited its giveaways with only 11. On the other end, the Terps forced 20 turnovers, including 16 steals, and turned them into 26 points.

Katie Benzan was pickpocketed in the fourth quarter and was the lone defender on a Penn State three-on-one. But the guard stepped into the passing lane and got the ball right back for a possession that would end in an Angel Reese offensive board and putback score.

[Diamond Miller is back to jump-start Maryland women’s basketball against No. 8 Indiana]

Reese registered her eighth double-double of the season with 15 points and 14 rebounds, eight of which she grabbed on the offensive end.

“She’s so active obviously around the rim… gives us a lot of great opportunities,” Frese said. “I think that’s a hard scout when you don’t know when she’s gonna go up and finish the layup versus… when she’s being doubled and triple-teamed to being able to kick it out to a wide-open shooter.”

Maryland’s offense bounced back against an unranked conference opponent in Penn State, with five players scoring in double figures. The Terps scored more than 100 points for the first time since Nov. 18 and made over ten three-pointers in a game for just the third time all year.

Two of those deep shots came from Miller, who showcased her talent and value to the Terps — and displayed to a home crowd exactly the impact she can have when healthy and playing big minutes.

“We have a great group of girls and I love to play with them… just to play with my teammates again was a lot of fun and I enjoyed it,” Miller said. “And we balled out tonight so I’m very, very happy we got the win.”