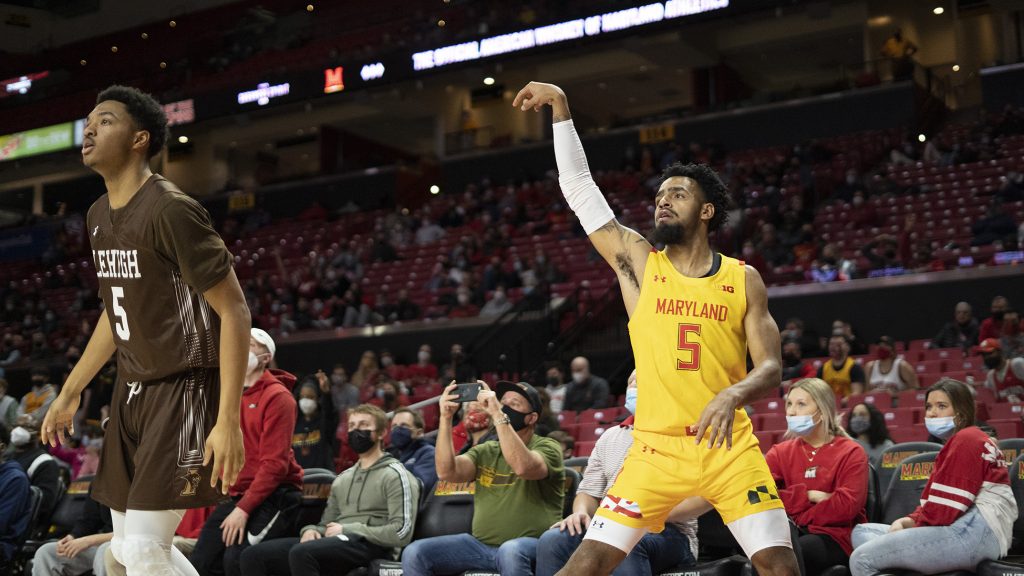 But as the game wore on, the Terps found their rhythm. And Eric Ayala made good use of it.

Ayala forced Reed Fenton to make a bad pass and turn the ball over with just under six minutes left. Ayala sprinted and stole the ball. He took it down the court and finished the job.

Ayala laid the ball in the net effortlessly, bringing his total to 18 points for the game. He got himself one more basket to lead the game in scoring with 20.

Maryland got off to another slow start when faced with a replacement opponent in Lehigh (1-10), but the momentum shifted in its favor to seal a convincing 76-55 victory.

“We came out a little lackadaisical,” Donta Scott said. “But second half we picked up our energy and we basically just came together and pushed through defensive mistakes . . . and just try to back each other more in the second half.”

The Mountain Hawks were the Terps’ first opponent coming off a 16-day break since beating then-No. 20 Florida at Barclays Center. With the extended hiatus from play, Maryland looked slower than usual to start the match.

“I thought, in the first half, Lehigh did some really good things. They scored the ball a little bit too easy, in our estimation,” interim head coach Danny Manning said.

The Terps went basket-for-basket with Lehigh — the Mountain Hawks struck first and Maryland played catch-up for much of the first half.

Jeameril Wilson and Evan Taylor dominated offensively for Lehigh. They combined for 31 of the Mountain Hawks’ 55 points.

Maryland’s first eight points were spread between four of its starting five. The Terps shared the wealth with Hakim Hart, Scott, Qudus Wahab and Ayala all scoring early.

But it was Ayala and Scott who carried weight at the basket for Maryland the rest of the night. Ayala shot 8-13 from the field and was perfect from three through almost 30 minutes of gameplay and Scott finished with 17 points and eight rebounds.

Manning gave his biggest lineup another go against Lehigh. Wahab and Julian Reese shared the court for the second time — but only briefly once again.

However, the Terps immediately felt Reese’s impact upon his entry to the game. He charged out to a quick seven points, pulled down three rebounds and sunk his second-ever three in a Maryland jersey.

The pace of the game began to change. The once-stagnant Terps began moving on defense and their shots fell more frequently.

Maryland landed four straight field goals and forced Lehigh coach Brett Reed to burn a timeout. The Terps were shooting 57 percent from the field when they took their largest lead of the game to that point.

But Maryland went to the locker room at the half with a slim lead, 37-34. The Mountain Hawks cut the Terps’ lead with seven points from Taylor and Wilson in the final two-and-a-half minutes. Maryland’s late offensive dominance was lost in the chaos of an opening half with eight ties and five lead changes.

They opened slow, but the Terps left the court with their second-highest points scored in a first half this season. The only other time Maryland scored 37 or more in an opening period was in its opening game against Quinnipiac almost two months ago.

Manning’s squad roared into the second half with the energy it showed in the middle of the first. They dropped eight points in less than five minutes and held Lehigh to just two made free throws.

“Starting out flat wasn’t our idea or game plan going into the game,” Ayala said. “We’re capable of playing a lot better than we did in the first half. Donta gave us some great energy coming out in the second half.”

What was a three-point game at the half turned into command on both sides of the court for the Terps.

Wahab drew a foul on Lehigh’s 6-foot-11 big-man — Nic Lynch — forcing him to foul out. The Mountain Hawks played the final eight minutes of the game without their preeminent post player.

Hart’s smothering defense forced Ben Knostman to pass the ball directly into his hands for his fifth steal of the night — a career-high for the junior — and the most for any Terp since Aaron Wiggins in 2018.

Midway through the second half, the Terps lost their starting point guard, Fatts Russell. After an awkward landing, Russell hit the ground and grabbed his knee. He was later helped off the court by teammates and put no weight on his injured leg.

Thankfully for Maryland, Ian Martinez returned from concussion protocol after a fall of his own against Northwestern, to take Russell’s place at point.

Ayala wasn’t the only Terp with a strong performance. Four other Maryland players — Hart, Scott, Wahab and Reese — finished with double-digits in the score column.

The Terps were able to overcome some problematic deficiencies in the first half to take down the Mountain Hawks. They nearly doubled Lehigh in the rebound column and forced them into more giveaways to take the game in effective fashion.

“We had really good balance offensively and we got contributions across the board from a lot of different guys,” Manning said. “That’s always something you’re happy to see as a staff.”