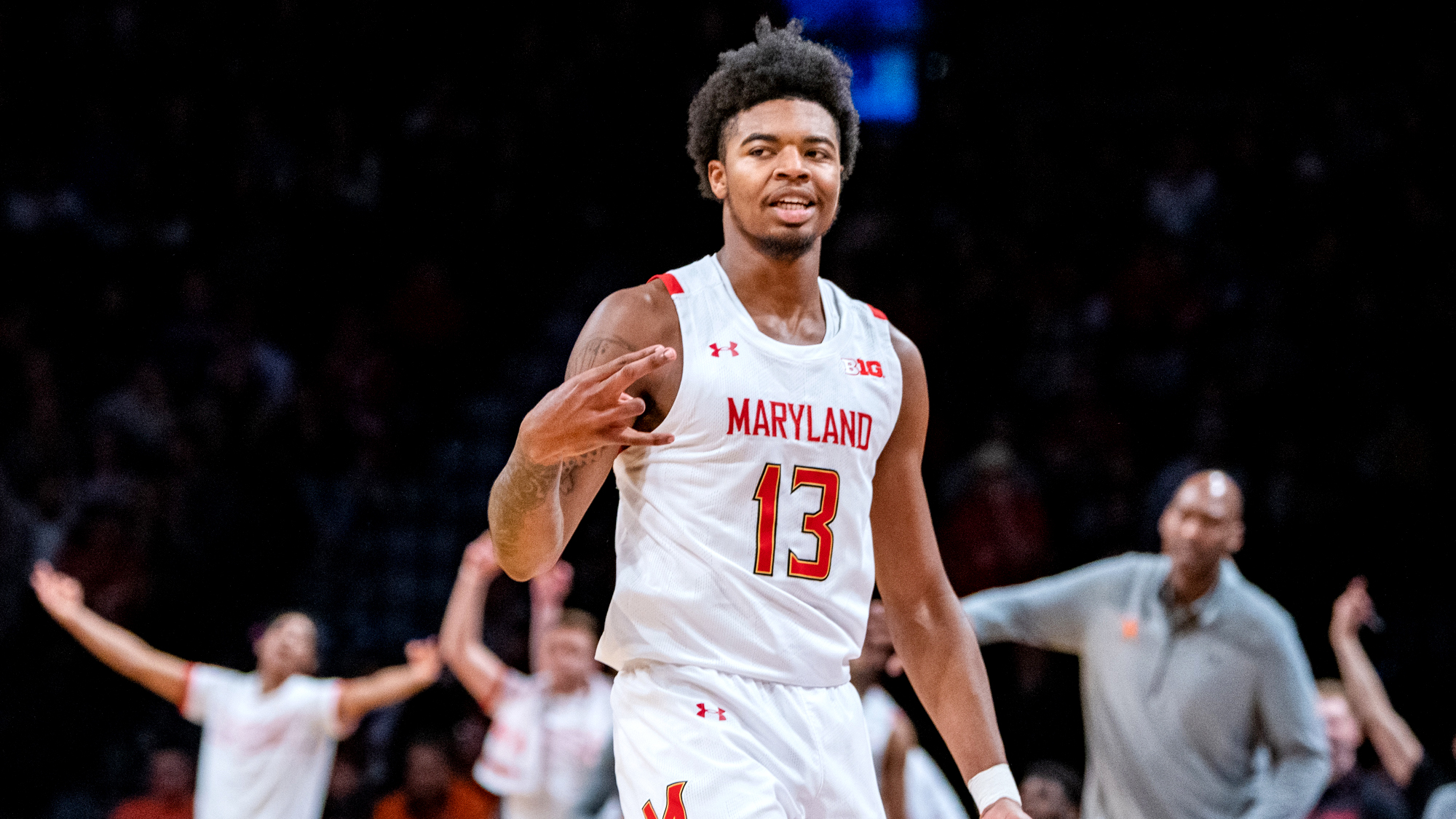 Hakim Hart celebrates after making a three-pointer during Maryland men's basketball's 70-68 win over No. 20 Florida on Dec. 12, 2021. (Joe Ryan/The Diamondback)

After losing its head coach just under two weeks ago, Maryland men’s basketball and interim head coach Danny Manning needed a win to right the ship.

Now, the Terps are riding high after a victory over No. 20 Florida at the Barclays Center in Brooklyn, New York.

Maryland had a week between games to adjust to the major changes in the program, and those extra practices showed in the Terps’ match against the Gators.

Eric Ayala and Fatts Russell returned to their high-scoring ways, combining for 38 points. It was Russell’s best scoring performance since Maryland’s victory over Vermont on Nov. 13. Florida coach Mike White considered Ayala and Russell’s contributions a big difference in the game, among other things.

“Even our feeds led to fouls, of course, or simply [Ayala] or Russell made a big-time play, and I really credit those guys,” White said. “We weren’t sharp enough defensively to guard a high-level backcourt like that, the way they were playing.”

The Terps also found unprecedented success from deep. Manning’s squad shot 61.5 percent from beyond the arc, their highest three-point percentage all season.

According to Ayala, Manning has been emphasizing shooting drills in recent practices to bring his team to a competitive level in games. The Terps delivered from three on Sunday after those practices.

“We haven’t played the way that we’re capable of playing,” Manning said. “But also we know we can do better. And then today was definitely a step in that direction.”

Manning is also putting new lineups and players to work at the start of his tenure as interim head coach. He’s been giving Marcus Dockery more playing time at point guard when Russell is on the bench and with Ian Martinez still unavailable — the only game Dockery played in before Manning took over was the season opener against Quinnipiac, where he played for three minutes.

Manning had also discussed playing Maryland’s two big-men — Qudus Wahab and Julian Reese — simultaneously in a game. And against Florida, they shared the court.

Dockery, Hakim Hart, Xavier Green, Reese and Wahab, a squad the Terps had never used prior, took the court against Florida. But this new lineup lasted just one minute before Dockery sat for the rest of the game.

Manning said he didn’t notice any definitive flaws in the lineup but there are specific times to use such a group.

While Manning’s squad showed some improvements in Brooklyn, there’s still a lot the Terps need to work on to stay competitive at the Big Ten-level. And now they have an opportunity.

Maryland doesn’t play another game until Dec. 28 when it faces off against Loyola Maryland at home. The Terps will have a 15-day break to mentally recover from the chaos in the program and put whatever practice time they have to good use. But a first win of the Manning era should serve as some motivation moving forward.

“I’m glad they’re going home, I wish they weren’t … selfishly, as a coach,” Manning said on Friday. “We’ll have a couple of practices before our first game and then go from there, but we are looking forward to spending some good, quality time on the practice court.”