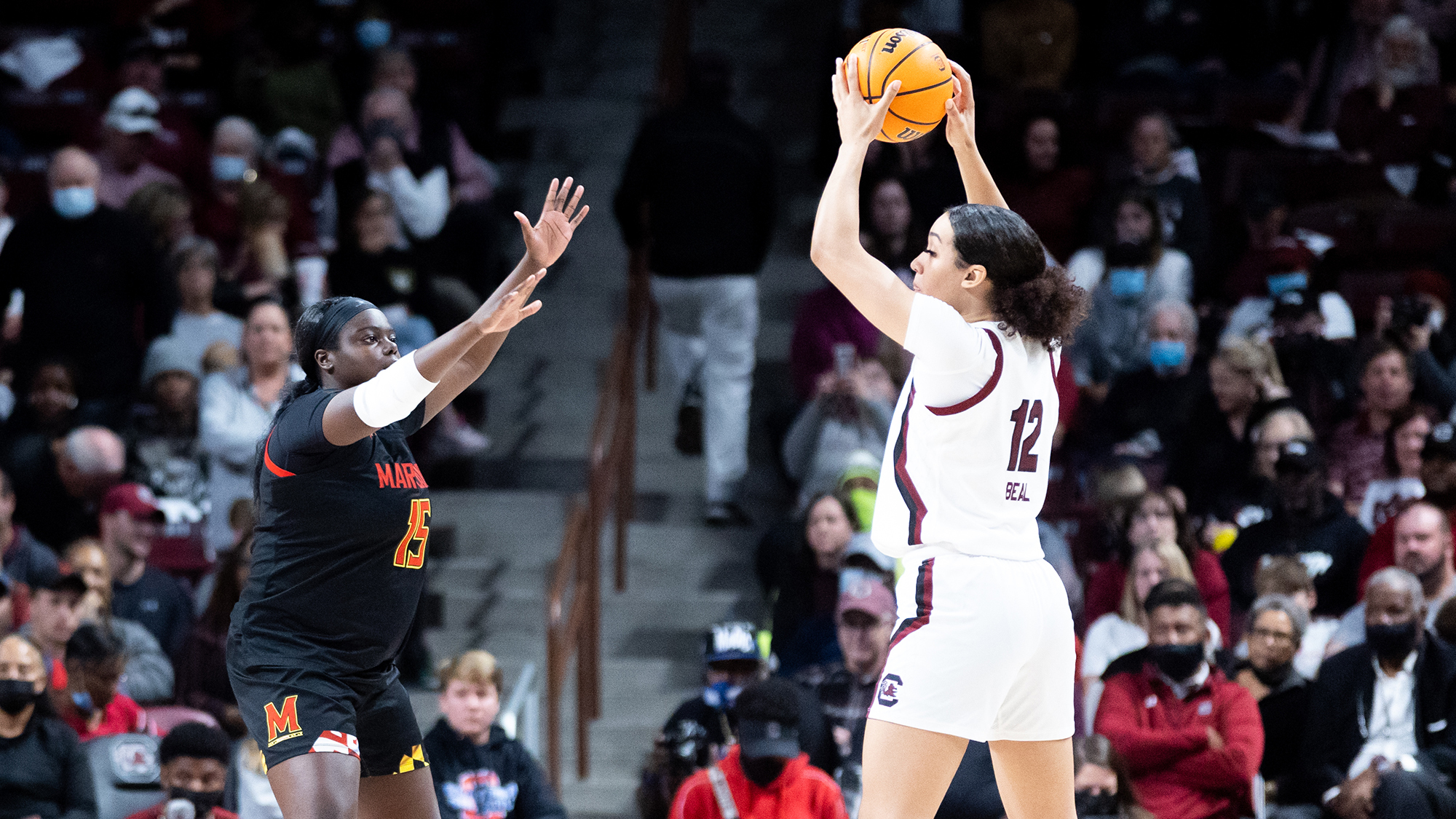 Led by another stout performance from Angel Reese, Maryland women’s basketball went stride-for-stride with the top-ranked Gamecocks, ultimately leading to a decisive fourth quarter with the score sitting at 51-47 in favor of the home team.

Maryland was able to recapture the lead off of a Faith Masonius layup with 6:30 in the fourth quarter. It was their first lead since the 7:24 mark of the second period and it was a part of an 8-2 run to start the final frame.

But after relinquishing the early momentum, the home stretch came down to South Carolina’s prowess on the boards.

After a missed opportunity to tie the game at 61, Maryland ceded its 23rd offensive board to Victaria Saxton following Aliyah Boston’s missed layup with 51 seconds to go. Shyanne Sellers fouled Saxton and sent the forward to the line where she made it a three-point game.

Another miss from the Terps gave the Gamecocks more chances to ice the game. Laeticia Amihere was sent to the line — making the first free throw but missing the second — only for the 24th offensive rebound to kick in via a hustle play from Boston.

Boston also went 50 percent from the line, but the damage had already been done.

“Obviously that’s what we’re about, we’re a team that rebounds,” Zia Cooke said. “We do our work early when it comes to rebounding. We got some of the best post players in the country, and they do they part so shoutout to them.”

South Carolina asserted its dominance with 24 offensive boards to go along with its plus-27 rebounding margin. The Gamecocks overwhelmed the Terps en route to a 66-59 victory.

“I thought as the game wore on, they were able to wear us out,” coach Brenda Frese said. “They’ve got more depth and more size than what we have.”

Maryland opted to run a 2-3 zone as it sought out the massive road upset against the No. 1 team in the country. The Terps were aggressive with their rotations at the top as they limited the Gamecocks to just three makes from beyond the arc.

[Maryland women’s basketball dials in on offense ahead of No. 1 South Carolina matchup]

While the frontcourt held its ground, the backcourt suffered greatly. The help defense was a step late and those delayed rotations left the offensive glass ripe for the taking.

Maryland fought, but the grit wasn’t there down low. Reese led the way with ten boards, with Ashley Owusu placing second in the rebound column with six of her own.

Despite the loss, the Terps are on the upswing. The zone helped neutralize South Carolina’s inside-outside game, a potential hint into what Maryland could offer come tournament play.

“This is what I built the schedule for, was to prepare us for March,” Frese said. “To be in these battles in this kind of intensity … I thought our team is really growing up.”

Maryland has a ton to be optimistic about after a rough stretch to end November. They have a nice chunk of time away from the court to work on hounding the boards before matching up against Coppin State in its last non-conference game on Dec. 21.

“I think today we proved ourselves and we proved that we can run with the best,” Masonius said. “Even though the game didn’t go the way we wanted it to, we fought.”