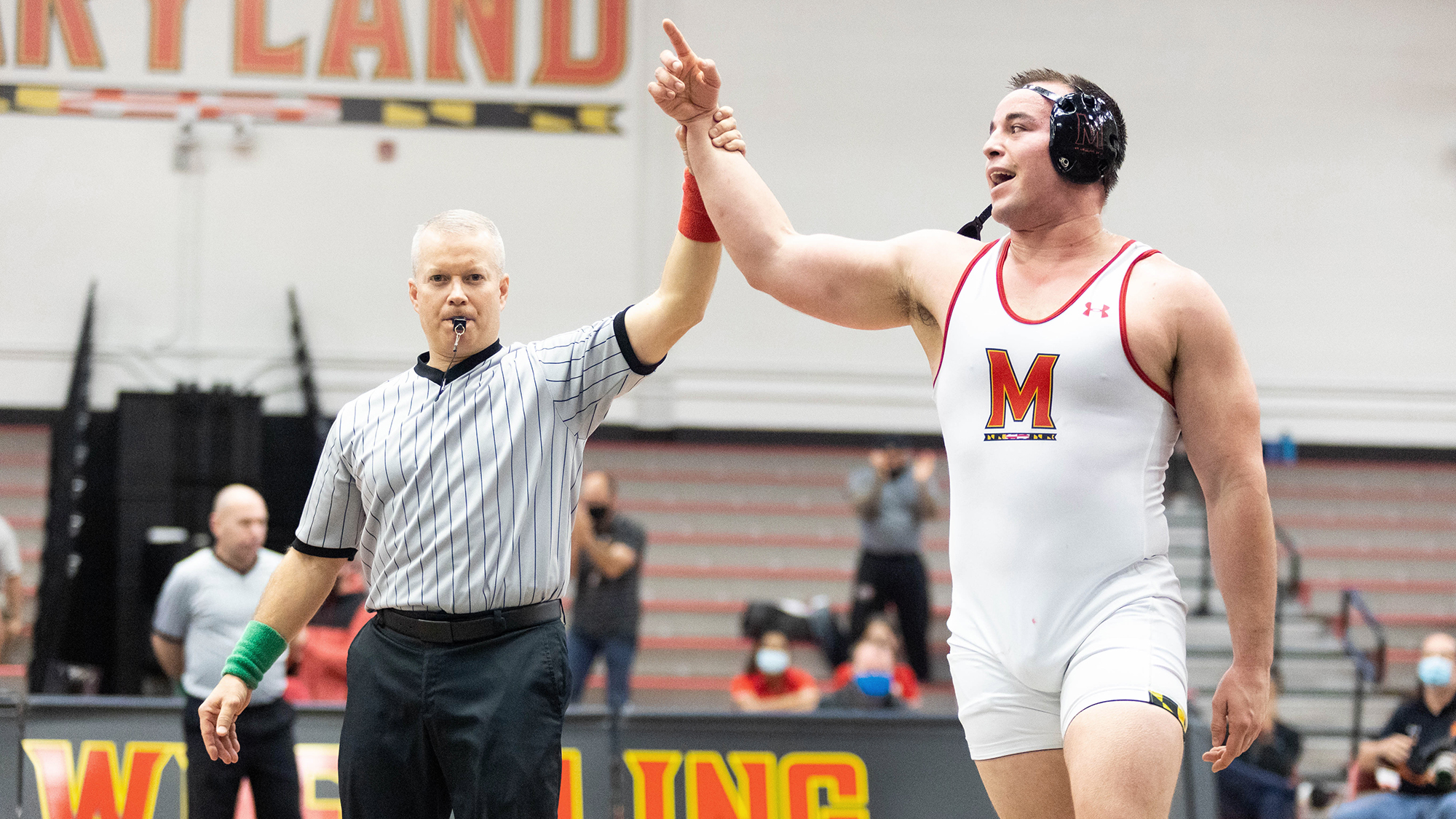 Zach Schrader's hand is raised after a 6-4 decision in sudden death against Duke during Maryland wrestling's 23-17 win over the Blue Devils on Dec. 4, 2021. (Julia Nikhinson/The Diamondback)

No. 32 Zach Schrader found himself in a familiar situation in sudden death against No. 33 Riley Smith. If he beat Smith, he would complete another comeback victory for Maryland wrestling.

With loud chants for Schrader echoing around the Xfinity Pavilion, the two were waiting for their moment to go in for the kill. But after a stall warning against Smith brought the two back to the center of the mat, Schrader finished off Smith with a takedown as the Maryland bench jumped in the air.

Schrader motioned to the crowd and celebrated the Terps’ third-straight dual victory, 18-16, over Navy — their first win against the Midshipmen since 2012.

“[Schrader] is like Mariano Rivera right now for us,” coach Alex Clemsen said. “He’s lights out and it’s fun to watch.”

The comeback was started by Dominic Solis after he mounted a fiery rally over Shane Finney with two stalling points in the third period. Solis finished Finney with a takedown in sudden death and the Maryland bench and the Pavilion jumped in excitement.

“I didn’t even know I tied it up,” Solis said. “I really thought I lost the match.”

But, unlike its past two comebacks, Maryland had three ranked wrestlers in its way of victory.

Kyle Cochran then faced No. 25 David Key. Cochran dominated the third period with a takedown and he kept Key at bay with over 3:30 in riding time.

Jaron Smith looked to keep the momentum going and with two early takedowns vs No. 24 Jacob Koser. Smith was in control to start and took a 4-0 advantage.

But Koser fought back in the third period with his own takedown and he tied the score at six. Any chance of a Maryland comeback was up to Smith in the last 30 seconds of his bout.

And Smith delivered. He held off Koser’s rally with over one min of riding time to win 7-6 and give Schrader the chance to pull off the three-peat.

Schrader got a quick escape from the down position to take a 1-0 lead into the third period. Smith got his own escape and sent the match to sudden death where Schrader clinched it for Maryland.

Not all was well for Maryland during its third-straight dual win. Zach Spence’s struggles at 125 continued as he lost by tech fall to Jacob Allen.

King Sandoval’s hot streak ended after facing his toughest test of the season in No. 27 Josh Koderhandt. Koderhandt was able to tame Sandoval’s explosive offense, dominating riding time. Sandoval tried for a late takedown but Koderhandt reversed him and cruised to a 7-1 decision victory.

But Danny Bertoni and Michael North contributed early with decision victories. Bertoni used a couple of takedowns to get a 7-3 win. North shook off the rust from last weekend, riding out the third period against PJ Crane to get an important 3-2 decision victory.

“[North] is really good at wrestling,” Clemsen said. “To see him continue to fight in the struggle and to persevere… I’m just really proud and happy for him.”

Those six points were enough to set up the back of Maryland’s lineup to pull off its third-straight comeback.

And with now three quality wins to close out 2021, Maryland is riding high going into Big Ten play.

“Our kids fought really hard tonight,” Clemsen said. “I’m proud of my kids and in our staff for the work we put in.”