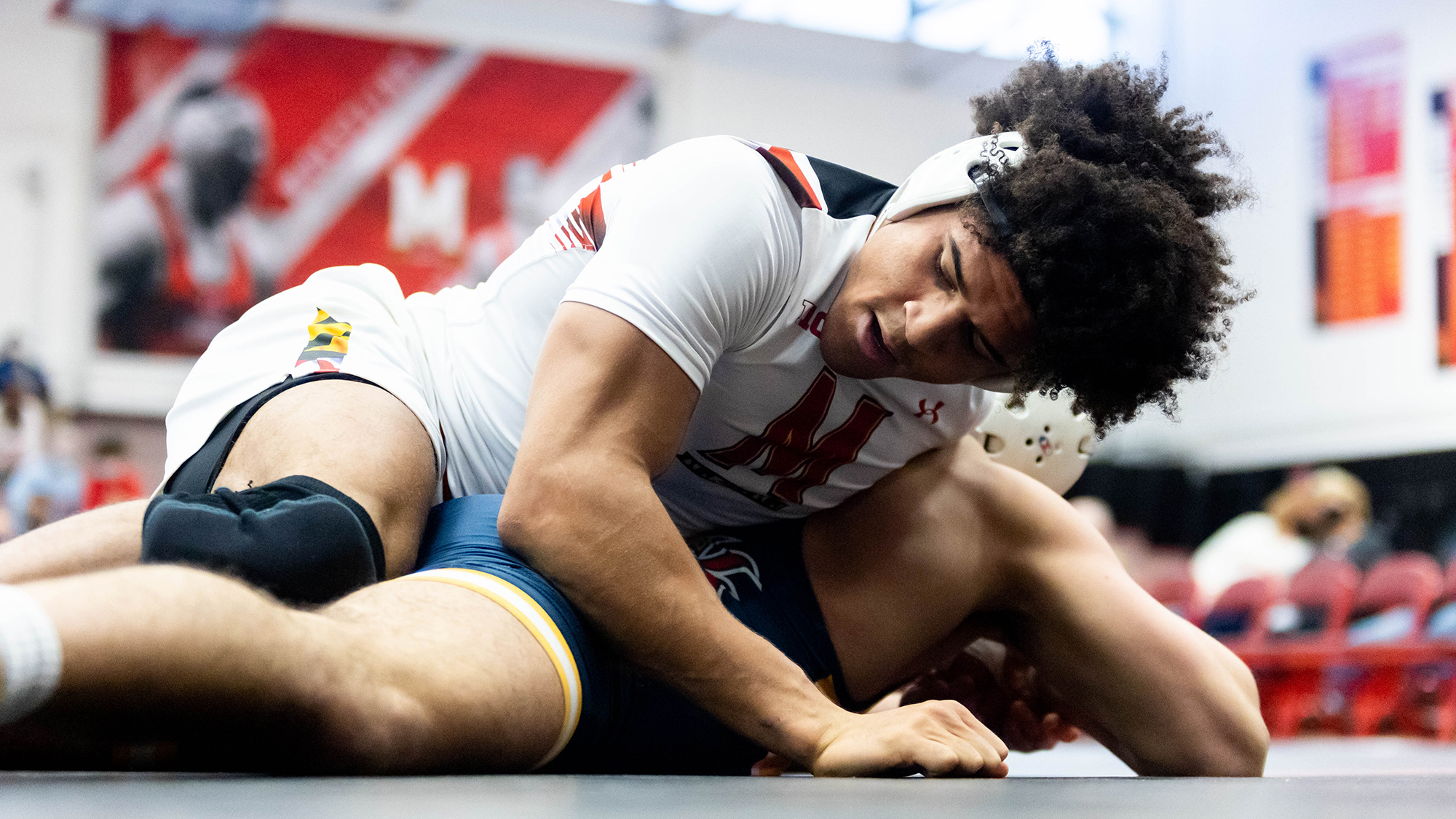 When Maryland wrestling was down 19-9 to Drexel and 17-12 to Duke following the 174 bouts, prospects were not looking up.

The Terps were desperate to grab wins in their only tri-meet of the campaign but hadn’t quite put themselves in a strong position, continuing an early-season theme of missed opportunities.

But the script didn’t write it that way on Saturday afternoon at Xfinity Pavilion when Maryland pulled off not one, but two improbable comebacks.

The surges were sparked starting with the 184 bouts and were led by three of the Terps’ most experienced wrestlers: Kyle Cochran, Jaron Smith and Zach Schrader.

“I’m still feeling pretty good, even when we’re behind on 184 because I trust [Cochran and Smith] before me,” Schrader said.

Cochran faced off against Bryan McLaughlin and took control of the match with an ankle grab and a takedown in the second period. Cochran took a 4-2 lead and didn’t look back, cruising to an 8-5 decision victory.

Now down 19-12 to the Dragons, Maryland needed a major decision or more in the last two bouts to have a chance at winning. Smith was able to solve that issue very quickly — and in a big way.

Smith got Santino Morina in a cradle and scored a takedown to quickly go up 2-0 in the first period. And a near-fall gave Smith a huge cushion over Morina in the second period.

With the third period winding down, knowing that every point was crucial, Smith rode Morina to earn a crucial point and a technical fall win, 17-2, as the deficit was suddenly just two points 19-17.

“At the end, I have to get the ride out in order to get that tech fall, ” Smith said. “You start thinking about it more as the moment pops up.”

Smith’s clutch riding time set Schrader up in a closer role at the heavyweight matchup against Eli Anthony, with the dual on the line.

Holding a comfortable 8-3 lead going into the third period, Schrader found that finisher mode in the third period and beat Anthony for a major decision, clinching the first win of the day for the Terps.

“Thankfully, these other two guys took the pressure off me,” Schrader said. “I was able to go out and just kind of wrestle a little bit more free and do what I wanted to do.”

It was déjà vu for Maryland later in the afternoon.

The Blue Devils’ No.7 Matt Finesilver appeared to get a back-breaking major decision over Dominic Solis. Down 17-12, Cochran had to start off another rally with little room for error. The Terps’ captain went to work early and got a quick takedown in the first 20 seconds of the bout.

Smith was up next looking to make an impact, this time against Kaden Russell. It wasn’t a contest once it got to the second period. Smith reversed Russell’s hold and put him on his back for a near fall. In the third period, Smith took his opponent to the mat for yet another takedown and near-fall, leading to a major decision victory of 15-2 and making it 20-17 for Maryland.

Up came Schrader with his second chance of the afternoon to close it out against Jonah Niesenbaum.

In the third period, Schrader got a key escape to tie it 4-4 and was building momentum looking for the dagger takedown. Niesenbaum fought off every attempt by Schrader, and sudden death was required to decide the dual.

Against Pittsburgh, Schrader found himself in sudden death against Jake Slinger and lost gambling for a takedown that didn’t pay off.

That experience was helpful on the day with much higher stakes as the Terps were 0-5 in sudden death situations entering this bout with the dual on the line.

Nisenbaum went for his own takedown and Schrader countered, performing a spinning takedown and getting Maryland a win over its old rival and a tri-meet sweep.

“[Nisenbaum] made the same mistake that I did against [Slinger],” Schrader said. “I kind of knew that was coming so I definitely learned from that.”

Being the lone-ranked wrestler on the team, Schrader’s improvement from his mistake against the Panthers to the closing moments of the Duke match was a big reason the Terps walked away with a sweep rather than settling for a split on the day.

“[Schrader] really did a good job of putting himself in position to win a match, he executed and capitalized,” head coach Alex Clemsen said. “I was really happy for him.”

CORRECTION: Due to a reporting error, a previous version of this story misstated that Dominic Solis lost to Matt Finesilver via pinfall. He lost via major decision. This story has been updated.
Please support our journalism by donating to The Diamondback.
Categories:
Tagged: