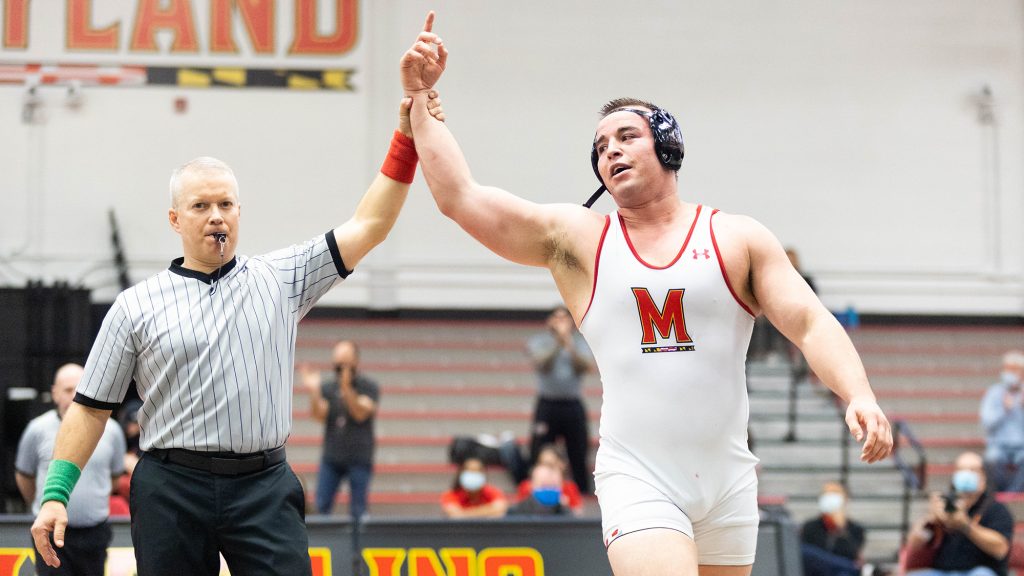 Zach Schrader's hand is raised after a 6-4 decision in sudden death against Duke during Maryland wrestling's 23-17 win over the Blue Devils on Dec. 4, 2021. (Julia Nikhinson/The Diamondback)

The stakes were high for Maryland wrestling. The Terps were down 19-17 needing only a decision victory to complete an improbable comeback.

Graduate transfer and No. 33-ranked Zach Schrader stepped up to the mat against Drexels’ Eli Anthony in the biggest moment of his young Terp career — he could give Maryland its first dual victory since January 2020.

Off the back of four takedowns through two periods, Schrader jumped out to an 8-3 lead. It was never close after that, with Schrader on the attack and in full control of the third period.

When the horn sounded at the end of the period, Schrader motioned to the home crowd to celebrate. He dominated Anthony with an 18-5 major decision victory and there was a happy handshake line for coach Alex Clemsen.

“I’m proud of our kids,” Clemsen said. “I thought we wrestled hard and had a good fight and good grit.”

Maryland topped the Dragons, 21-19, and earned its first victory of the season. But one victory wasn’t enough for the Terps on the day.

Just under two hours later, with Maryland up 20-17, Schrader stepped up to the mat with the chance to clinch another victory against Duke’s Jonah Niesenbaum. Down 4-3 to start the third period, Schrader got a key escape to start a tense third period.

The wrestlers were evenly-matched throughout the third period, sending the match to sudden death to find a winner.

Schrader started off sudden death on the attack and spun Niesenbaum on the mat. Schrader got the takedown victory for Maryland, 23-17, and it clinched a tri-meet sweep.

In both duals, the Terps (2-2) found themselves down going into the 184 bouts. Kyle Cochran started off the first comeback with a dominant decision victory over Bryan McLaughlin. But Maryland needed more than just a decision victory in the last two bouts to have a chance to win.

Jaron Smith was on the attack behind an explosive offensive display. He dominated Santino Morina for a technical fall victory for a key five points that set up Schrader to finish it off.

The Terps had little time to celebrate and were soon in the thick of things with the Blue Devils. Maryland was down 17-12 going into the 184 bout. But Cochran, Smith, and Schrader all had an encore performance in front of a loud Xfinity Pavilion to pull away with another victory.

“To get to victories at home in front of your home crowd is fun,” Clemsen said. “It’s been a while since the [Pavilion has] seen wins.”

[Solis, Cochran show out as Maryland wrestling outdone by No. 15 Pittsburgh, 26-7]

Maryland finally found early leads from King Sandoval and Danny Bertoni against both Drexel and Duke after frustrating starts to the season by both.

John Martin Best also fought to a crucial victory. Best earned a 5-0 decision against the Blue Devils’ Brandon LaRue after suffering an apparent right leg injury early. His win kept the Terps in the match when Duke had all the momentum in its favor.

“The heart, the effort and the grit to find a victory there [was huge],” Clemsen said.

Even with the back end of the Maryland lineup stealing the show, Sandoval did his part early on. He had two pinfall victories which accounted for 12 points on the day —  he even reversed Deon Pleasant’s takedown attempt and finished him off using a cement mixer move.

“I knew our team needed as many points as possible,” Sandoval said. “I wanted to go out there and just throw down and help the team… and it ended up going the way that I wanted it to.”

Through their first two duals of the season, the Terps had chances against Virginia and Pittsburgh to pull out wins. However they fell short both times.

But in its only tri-meet of the season, Maryland’s experienced wrestlers pulled through when it counted to earn back-to-back dual victories for the first time since 2017.

“We talk about the four pillars of our program: faith, sacrifice, accountability and perseverance,” Clemsen said. “I think about that last word perseverance,  it ain’t over till it’s over…all credit to our kids and for the work that they’ve done.”