Solis, Cochran show out as Maryland wrestling outdone by No. 15 Pittsburgh, 26-7 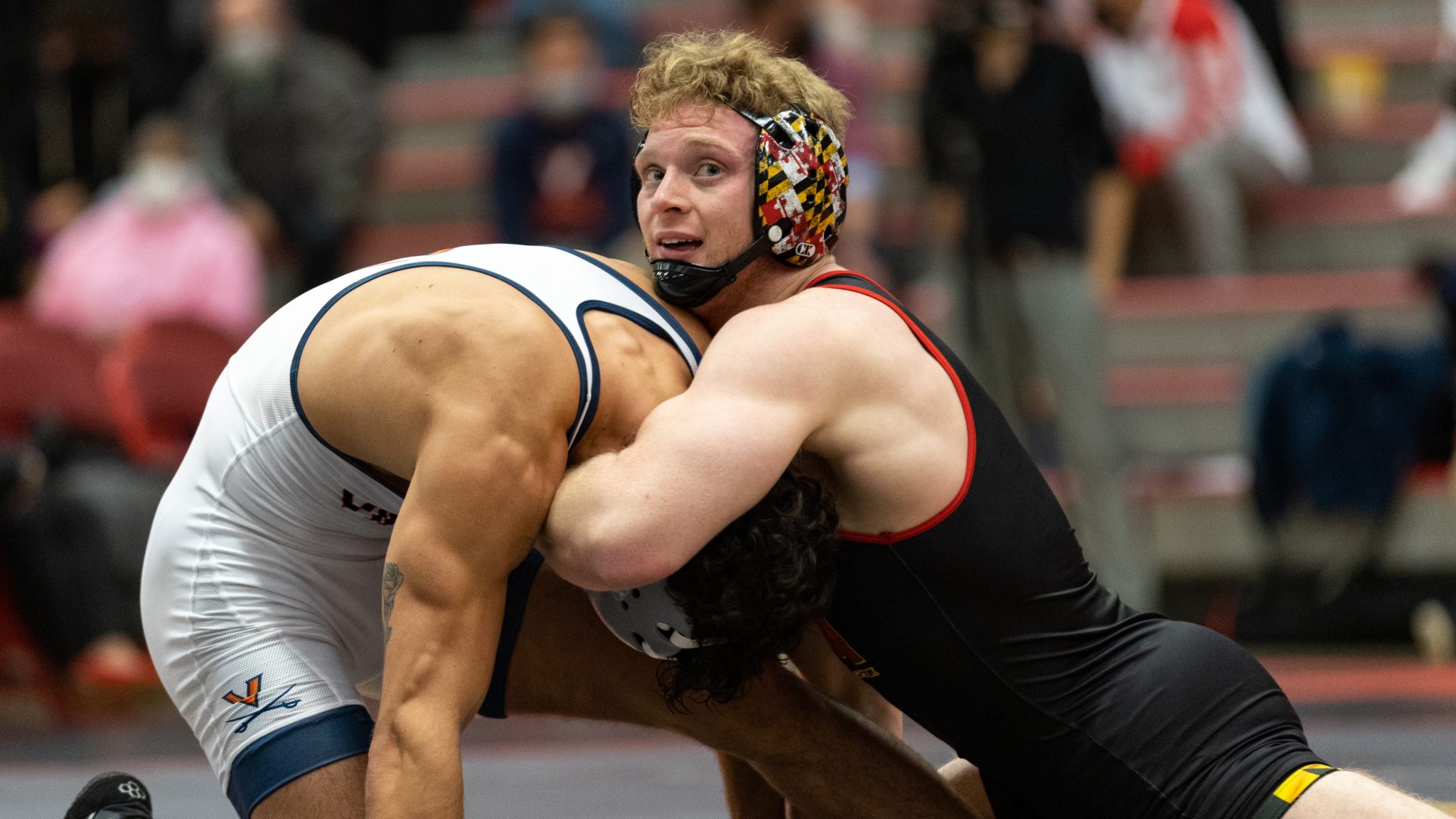 Lucas Cordio holds his opponent in a headlock during Maryland wrestling's 24-9 loss to Virginia on Nov. 12, 2021. (Cam Andrews/ The Diamondback)

In a similar position to its season opener against Virginia, Maryland wrestling was already down 20-0 with little to no chance of beating No. 15 Pittsburgh. However, Dominic Solis tried to give the Terps a spark.

He started off the third period in the bottom position against No. 33 Hunter Kernan with a lead. A quick escape, followed by a takedown then turning Kernan on his stomach for a near fall and suddenly it was new territory for Maryland, getting on the board for the first time.

“That was just my game plan that me and my coaches established,” Solis said. “I just stuck with it because I trust the work that we put in.”

Following Solis, Kyle Cochran dominated James Lledo on the mat, having over two minutes in riding time en route to a 5-0 decision victory.

But outside of Solis and Cochran’s offense, points were hard to find throughout the night for the Terps to have any chance of pulling off an upset on the road.

[Maryland wrestling is prepared for a tough matchup with No. 15 Pittsburgh]

Despite great showings and wins from Solis and Cochran, Maryland (0-2) fell flat early against the Panthers (3-1), losing 26-7.

There were plenty of chances for the Terps to stack up other wins with three matches going to sudden death — but no other Maryland wrestlers were able to get points.

For the second straight duel, Danny Bertoni found himself in sudden death, looking to pick up the Terps’ first win. He went for the winning takedown against No. 17 Cole Matthews but he countered and drove Bertoni to the mat to pick up the 3-1 decision victory.

It appeared late in the third period, tied at one, Bertoni had the winning takedown but the referee didn’t award points to Bertoni, much to the evident anger of the Maryland bench and coach Alex Clemsen.

Lucas Cordio, like Bertoni, found himself in sudden death in a low-scoring 1-1 affair against No. 33 Elijah Cleary.

Cordio attacked early and went for the gamble of a double leg takedown for the win, but it didn’t pay off. Cleary was ready and quickly ended the match with a counter and a takedown of his own.

Instead of the Terps closing the gap on the scoreboard they were left frustrated once again, not finishing off matches.

There was one last chance to put another win on the board in the heavyweight bout, with No. 32 Zach Schrader going to sudden death against the ACC Wrestler of the Week Jake Slinger with a familiar score throughout the night of 1-1.

But it was all Slinger in sudden death with a takedown and a 3-1 win.

“I felt like we outwrestled all three of those competitors,” Clemsen said. “To come up empty-handed in all three of them was disappointing for our kids.”

Nothing else went Maryland’s way the rest of the evening as Pittsburgh kept the Terps contained.

Zach Spence and Will Berkowitz offered little resistance in their respective matchups.

In the 197 weight class No. 2 Nino Bonaccorsi cruised to an easy 10-3 decision victory over Jaron Smith.

King Sandoval and No. 33 John Martin Best were shut out in their bouts. But for Best, his bout could have ended differently over one mental mistake.

Best was in a close bout with No. 4 Jake Wentzel, down 1-0 entering the third period. He chose to start in the down position rather than neutral, as Clemsen said his coaching staff had told him to.

The mental lapse cost him in the ranked-showdown as Wentzel rode Best throughout the period to clinch a 2-0 victory.

“You can’t do that,” Clemsen said. “Your coaching staff tells you to do something, you do it. So he’s gonna have to learn from that.”

The result was another duel where the score could have been much closer had Maryland taken advantage when Pittsburgh gave it an opportunity. Now the Terps will look toward matchups against Duke and Drexel.

“We just need to continue to execute game plans,” Clemsen said. “I felt like our kids are just as good as their kids but we just got to convert though.”