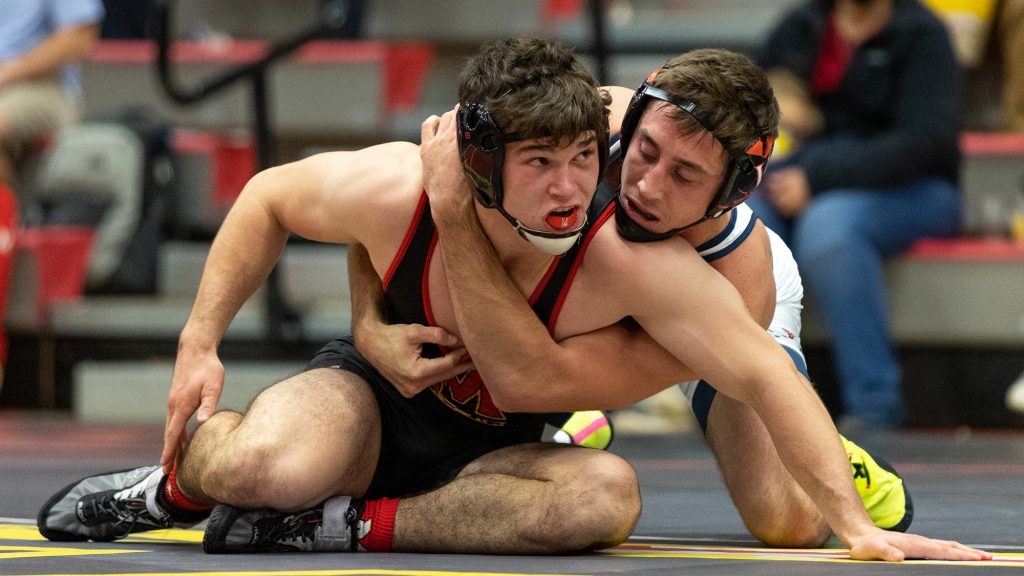 When Jaron Smith held off Ethan Weatherspoon’s rally to clinch a 16-14 decision victory, Maryland wrestling had won three bouts in a row and was giving an ACC powerhouse in Virginia all it could handle.

The problem was, before winning those three bouts the Terps were already down 21-0 on the scoreboard, effectively ending a chance at winning the duel. While the three wins show that Maryland is improving under coach Alex Clemsen in year three, eventually, to become an elite wrestling program, the moral victories need to turn into signature wins in the eyes of Clemsen.

Here are three takeaways from Maryland’s 24-9 loss to the Cavaliers.

Facing a conference-only schedule last year due to the pandemic, the Terps often fell behind early on the scoreboard in the 125 and 133 bouts. That same issue harmed Maryland again Friday.

Clemsen rolled with incumbent Zach Spence in the 125 matchup against Patrick McCormick. While Spence hung in the bout and fought hard, McCormick’s two takedowns and riding time gained him a 6-3 decision victory.

King Sandoval in the 133-pound contest against No. 16 Brian Courtney had an early lead off an impressive takedown. But it was all Courtney after that with four unanswered points for a 4-2 decision victory.

[Late rally not enough to get Maryland wrestling a victory, lose opener to Virginia, 24-9]

It didn’t help that Danny Bertoni, William Berkowitz, Lucas Cordio and John Martin Best all lost their matchups, putting the Terps in a 21-0 hole at intermission. A common theme from last year.

“Even if we’re down by a good amount, the second half we can always make some noise and there’s always a chance of coming back,” Kyle Cochran said.

If Maryland wants to start getting victories and becoming a top-tier program, it needs to avoid putting themselves in early holes before getting to its bread and butter wrestlers, hoping for a miracle comeback.

“The main thing that we got to get through that’s really going to change the way our team performs is, you know, when it gets hard and when you get tired, you got to just work through it, because everybody is capable of it,” Cochran said.

If there was one wrestler Clemsen had NCAA Tournament expectations for after a great offseason, it was Dominic Solis.

“I fully expect [Dominic] to be at the national tournament at the end of March,” Clemsen said.

At the Clarion Open, Solis got that campaign off to a bad start when he struggled and went 2-2 on the day.

But he came back in a big way on Friday, putting the Terps’ first points on the board against Virginia and got the momentum going with a 5-2 decision victory over Justin Phillips.

But the sophomore’s role on this team has grown despite it only being year two in the program when he was named as a third-team captain to join Cochran and Michael North.

“[Dominic’s] a leader in and out of the room,” Cochran said.

But even with the victory on Friday, Clemsen is still looking for more out of Solis going forward.

“He just looks young right now,” Clemsen said. “The more he wrestles in front of the crowd and with more match time he has he will grow out of that because he’s just such a hard-working good kid, so I’m not too worried.”

Maryland can earn points this season between the 174 and 197 weights.

After being shut out in the first half 21-0 against Virginia, Solis, Smith and Cochran rescued what could have been a more disappointing performance on the scoreboard. They weren’t easy wins but they were wins nonetheless, which Maryland is looking for.

If the Terps can correct their early woes in duels and salvage early points, there’s a chance for those three to wrestle for more meaningful points going forward.

But right now — with Solis starting the year at 3-2 and a healthy Smith being in the lineup at 197 with Cochran sandwiched between the two — there’s reason to be excited about this trio going forward as the year goes on.

“Me, [Dominic] and Jaron … we’re all working and getting better,” Cochran said. “So I’m happy to be in between both of them.”