Maryland wrestling is prepared for a tough matchup with No. 15 Pittsburgh 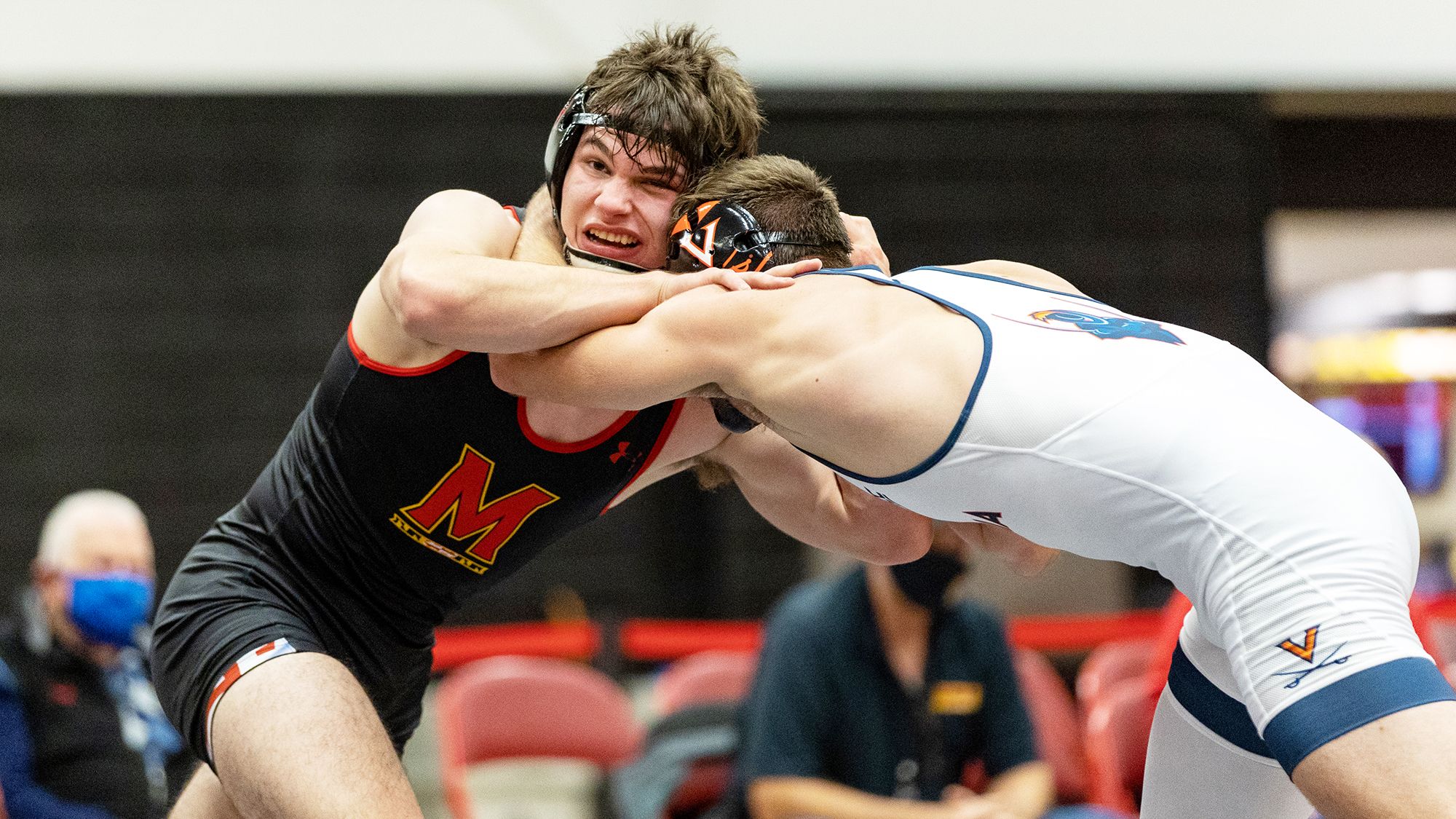 Zach Spence locks up with Patrick McCormick during Maryland wrestling's 24-9 loss to Virginia on Nov. 12, 2021. (Cam Andrews/ The Diamondback)

Coming off its season-opening 24-9 loss to Virginia, Maryland wrestling looks to rebound as it continues its nonconference schedule, traveling to face off against another ACC opponent in No. 15 Pittsburgh.

Despite one of the Terps’ better showings against the Cavaliers, Maryland left a lot of points and wins on the board in the early bouts, ruining the chance of picking up a signature win. However, coach Alex Clemsen’s squad will have another shot Monday to pick up the upset win they’ve been looking for in hopes of taking the next step to becoming an elite wrestling program.

But, if the Terps want to pull off the upset on the road and beat a ranked ACC opponent such as the Panthers, 2-1, who feature eight ranked wrestlers in their projected lineup, Maryland will have to do a better job of being patient for opportunities and finishing off bouts when chances arise.

“Against [Virginia], we just didn’t do a good enough job of controlling where the matches were fought,” Clemsen said. “We were too accepting of wrestling out of our best positions and we do that, you have chances to get beat.”

Pittsburgh is led early in its projected lineup by ranked wrestlers in the 125, 133 and 141 bouts, with No. 24 Gage Curry, No. 5 Micky Phillippi and No. 17 Cole Matthews, respectively. This will give the Terps’ projected starters Zach Spence, King Sandoval and Danny Bertoni challenges, but also offer opportunities to improve their resumes and put up quality wins in nonconference play.

The Panthers are also led in the 165 and heavyweight bouts by No. 4 Jake Wentzel and a red-hot ACC Wrestler of the Week in Jake Singler. Wentzel will be the second consecutive ranked opponent No. 33 John Martin Best will face. And going against Singler is No. 32 Zach Schrader, who has the chance to rebound after a loss against the Cavaliers.

But, the star of Pittsburgh’s wrestling program is one of the best wrestlers in the country in the 197 weight class — No. 2 Nino Bonaccorsi. Bonaccorsi is a three-time NCAA qualifier and was an NCAA All-American last season. He recently came off wrestling in the 2021 U23 World Wrestling Championship in Serbia.

Jaron Smith will be tasked with facing him — and it’s going to be one of the toughest tests he will have this season.

[Late rally not enough to get Maryland wrestling a victory, lose opener to Virginia, 24-9]

“[Bonaccorsi has] proven that he can wrestle lots of different styles, lots of different positions, and he’s proficient in a lot of them,” Clemsen said. “If Jaron really controls the match and forces, his tempo and his style, he can be successful against anyone.”

Facing a deep-ranked team on the road in front of an opposing crowd for the first time since the COVID-19 pandemic hit will be another early test for this Maryland group.

But this is precisely what Clemsen wanted when putting together his nonconference schedule — to give his wrestlers the opportunity to prove themselves before facing the gauntlet that is the Big Ten.

“I want to wrestle the best teams,” Clemsen said. “Their kids wrestle hard. Two years ago, we had an exciting duel with them at the Xfinity Center [Pavilion] and hopefully, we can have another one at Fitzgerald Field House.”