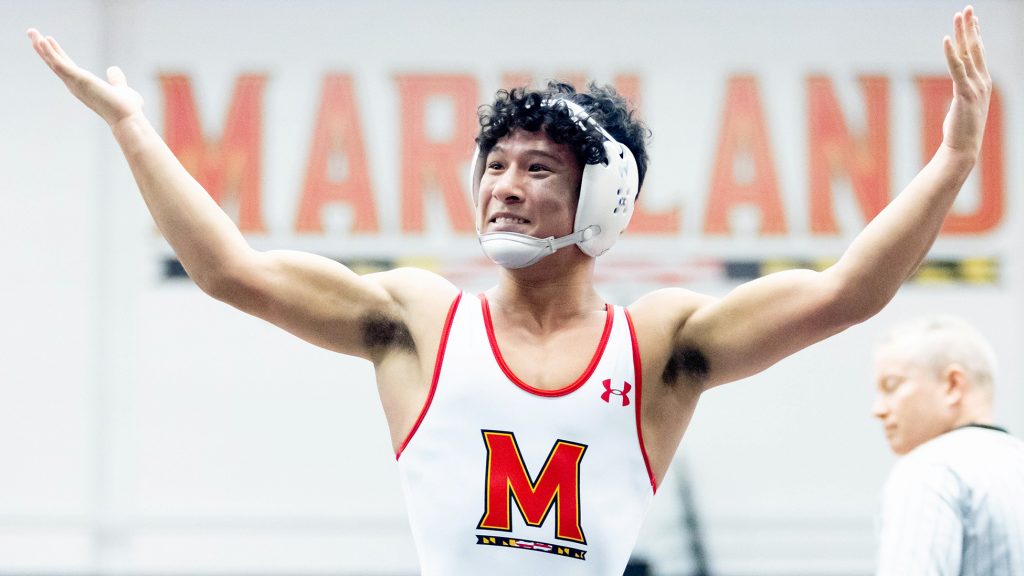 King Sandoval celebrates his victory over Duke during Maryland wrestling’s 23-17 win over the Blue Devils on Dec. 4, 2021. (Julia Nikhinson/The Diamondback)

In order for Maryland wrestling to continue its momentum from its tri-meet sweep of Drexel and Duke, it will need someone in the 125-165 bouts to constantly continue to step up going forward.

King Sandoval could be the one.

Sandoval returned to wrestling in the 133 weight class this season after a brief stint in the 125 weight class last year. He is coming off two pinfall wins against Drexel and Duke, including using an impressive cement mixer move to finish off his match against Drexel. It’s a move he was inspired to start doing after watching an NCAA wrestling finals with his dad when he was a kid — it’s a move he’s been doing for as long as he can remember.

With Maryland not yet picking up a win in 125 bouts in their four duals so far this season, Sandoval has embraced taking on the role of being the person to get the team going in those matches.

“I believe that energy kind of seeds forward how the rest of the dual goes,” Sandoval said. “I feel like when I try my best and I can get wins like that, it really fires up the team to really go out there and perform the best that they possibly can.”

Sandoval’s two pinfall wins put up 12 points on the scoreboard and played a crucial part in setting up the back end of Maryland’s lineup to wrestle in dual-deciding matches.

It’s a formula for success that Maryland hopes to continue going forward.

“It means a lot when the guys at the start of the lineup are really doing their jobs and exceeding their jobs like [Sandoval],” Kyle Cochran said.

But wrestling in a competitive weight class and facing a tough nonconference schedule before facing the deep Big Ten in-conference play means Sandoval is going to face tough competition. And those bouts put his part of the formula to the test.

The Terps will face in-state foe Navy and their 133 projected starter Josh Koderhandt, who is No. 27 in the latest Intermat rankings.

Whether it’s a nonconference match or a Big Ten bout, part of Sandoval’s success early on has been because he’s been more aggressive.  He’s been searching for more scoring opportunities like he did during the tri-meet.

Another important part of Sandoval’s growth has been a productive offseason. He placed third at USAW Greco-Roman World Team Trials and finished fourth at UWW Senior Greco-Roman Nationals. Wrestling Greco-Roman in the offseason has helped him improve his folkstyle wrestling, Sandoval said.

It’s important for Maryland to put their tri-meet sweep quickly behind them and avoid an emotional hangover after snapping a long losing streak.

To win three in a row, they’ll have to face a deep Midshipmen team that features five ranked wrestlers in their projected lineup. And if Sandoval can maintain his success and put up early points, he can only help the Terps beat their in-state rival.

“I’m gonna go out there and perform the best I can to my ability in hopes of trying to keep the momentum going to lead us to a duel win against Navy,” Sandoval said.