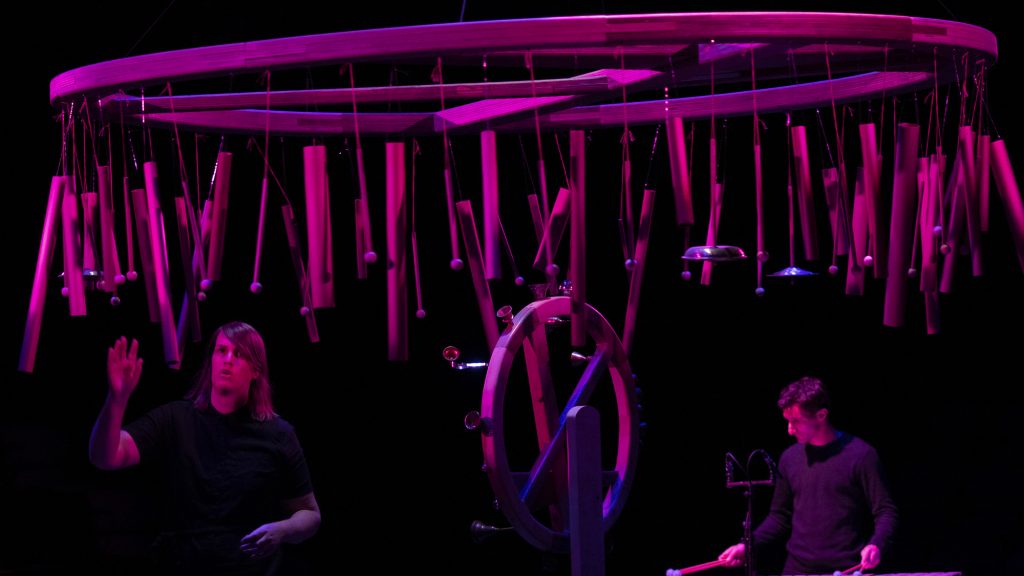 "A Kind of Ache." (Photo by David Andrews)

A single white spotlight illuminated performer Sarah Hennies as she gently beat a large drum with one puffy mallet. A large sculpture was suspended from the ceiling in the center of the stage. It was a large wheel with wooden drum sticks, magenta aluminum pipes that looked like wind chimes and pan lids on rods all hanging like it was an oversized baby mobile.

Hennies played the drum with her left hand while her right grasped a large pipe, pulled and gently spun the sculpture. A few soft, tender ‘dings’ emitted from the chimes as the sculpture spun.

The multimedia performance “A Kind of Ache” was a part of the Visiting Artist Series at The Clarice Smith Performing Arts Center in Kogod Theatre on Saturday evening. “A Kind of Ache” explores a world “designed from and for a queer identity,” according to the event’s website.

Hennies was the composer of this performance alongside The Living Earth Show, which included Andy Meyerson on percussion and Travis Andrews on guitar.

When another spotlight cast onto Meyerson, he began to lightly beat a metal vibraphone. One dangling water bottle earring on his left ear swung along to the beat. The hollow sound Meyerson played grew louder as Andrews was revealed. He played a single note on a crimson red electric guitar that sounded like a storm warning alarm.

Meyerson said The Living Earth Show has known Hennies for many years and worked with Terry Berlier, a conceptual interdisciplinary artist, for a decade.

The idea for this performance was first conceived years ago. It was not until October of this year when the group were able to be in the same room for this project, said Berlier, who was involved in “A Kind of Ache’s” formation from the beginning.

Construction of the performance pieces took a couple of months, Berlier said. She created the suspended 10-foot wheel called “A Million Queers Plea(se)” a small wooden rolling wheel with wood balls caged inside called “Roly Poly” the six and a half foot tall vertical wheel titled “Remaking the Wheel” and pan lids from her “Pan Lid Gamelan” series.

The project seeks to create a world both from and for queer people.

The title: “A Kind of Ache” derived from Hennies’ partner. They had read a book by author Susan Stewart that examined collections and had a recurring theme of queer people being collectors.

“One could say that [collecting] is its own kind of world making. In the context of queerness, you could interpret that the reason one might want to retreat into another world is because the current world is not acceptable to queer people,” Hennies said.

Bells are the collector item of choice for herself. Hennies has accumulated about 100 different bells and said she didn’t know why.

The pair slowly moved the gold and silver bells to form a circle around the sculpture and instruments they played during the hour-long performance.

Hennies walked to the inside of the suspended pipes and pulled down one of the pans hanging from the sculpture. She pulled a bow across the metal pan, producing an eerie sound.

Meyerson followed Hennies as Andrews began to move the few remaining bells to the edges of the stage. Andrews joined them underneath the sculpture and grabbed the remaining pan spinning around the three of them.

The trio stroked the pans slower and slower as the sculpture grew silent. The warm tangerine glow of light around them dimmed. When the stage went dark, the music ceased.

“What we try to do as an organization is a type of world building,” Meyerson said. “I think for us, it’s about creating a very specific kind of world and letting people visit that for a while.” 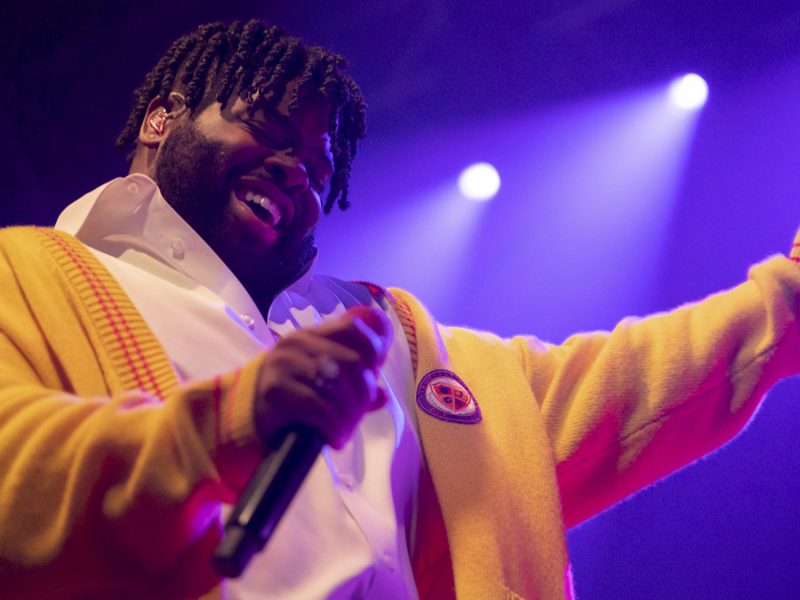