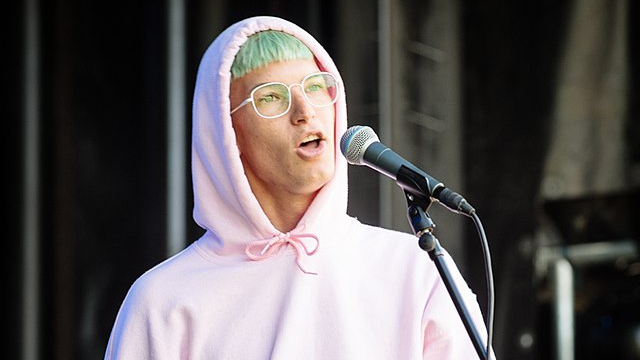 Singer-songwriter Gus Dapperton and his band played their indie pop hearts out for their last show in Washington, D.C., at the 9:30 Club on Nov. 20.

Red lights and synthesized chords flooded the room as audience members cheered for Dapperton. He ran to the microphone awaiting him on stage as we anticipated the first lyrics to exit his mouth.

Dapperton kicked off the show with “Bluebird,” one of his first released singles from his sophomore album Orca.

After an upbeat start to the show, his band turned the dial back immediately to perform “Moodna, Once With Grace,” a ballad about heartbreak with a sad, wallowing guitar riff.

Ruby Amadelle finished off  “Moodna” on the keyboard, sending sad pings of the synthesizer into the ether and transitioning to “Amadelle With Love,” a dancey track from Dapperton’s EP You Think You’re a Comic!

As the night went on, Dapperton delved into some more of his dance songs.

It was when he started “Prune, You Talk Funny” with the familiar, hesitant major seventh chord that fans knew they were in for a delightful experience.

With the booming sounds of the fan-favorite track, we were sent into fits of dancing as we heard Dapperton’s lyrics tossed throughout the 9:30 Club.

Then Yendawg, the bassist, switched to the acoustic guitar as we were serenaded through “My Favorite Fish,” a song about Dapperton’s partner Jess Farran.

We then jumped into the album Orca as we heard rock sensational numbers such as “Palms” and “Sober Up.” Out of the songs played from Orca, my favorite was “Medicine,” as it seemed to get the crowd most excited.

The track had elements of a Rossini crescendo, with Dapperton’s band adding more instruments periodically to create the illusion that they were becoming louder — or in other words, the beat drop was insane. If the speakers had hands, they definitely grabbed the room and shook the people inside.

We screamed with devotion as Dapperton’s neck veins bulged, begging for us to accompany him.

I believe the crowd connected with him as he became vulnerable with us on stage.

Following this, crowd members continued to accompany Dapperton as we sang along to the repeated and cascading vocal ostinatos that rode waves of synth in “Gum, Toe and Sole.”

Without missing a beat, his band transitioned into “I’m Just Snacking,” another popular tune. The two share similar chords, allowing a seamless transition.

As we went back to the earlier days of  “Yellow and Such,” we danced around with familiar strangers for a familiar tune.

Following this came songs from my personal favorite record of Dapperton’s, Where Polly People Go to Read.

Yendawg effortlessly soared through the catchy bassline of “Verdigris,” but halfway through, five accented beats interrupted the line and launched us into “Coax & Botany,” which is played in the same key.

Dapperton then went into “Eyes for Ellis.”  Having seen Dapperton perform in Baltimore back in 2019, my favorite part of the set was hearing it live again. The epic ritenuto at the end sent audience members into radiant bundles of energy as lights flashed with excitement.

We heard drums and synth keys shoot through the venue and send us with them.

Because it was the last stop of the tour, the setlist changed significantly, and we heard unplanned songs such as “I’m On Fire,” a David Bowie cover and “Fill Me Up Anthem.”

The concert had turned into a party at that point as we danced and threw our hands into the air, hoping to catch onto the final lyrics sung into the venue.

As the night came to an end, Dapperton promised us one more song: “Post Humorous.”

The song had been released during peak quarantine, and hearing it live for the first time sent us into fits of joy.

Dapperton and his band left the stage, but of course, before they could even leave, audience members filled the venue with raucous noise, begging for an encore.

Moments later, our wish was fulfilled, and we received a killer performance of “First Aid.”

This track is well-known for Dapperton being incredibly vulnerable, as he talks about struggling with mental health and needing someone to save his life.

Following this heartfelt performance, we were promised another song. Dapperton and his band played “Twist and Shout” by The Beatles, and we all sang along.

Dapperton pulled at our heartstrings and belted out raw and real emotions that night, finishing up his 2021 tour with Washington, D.C., indie heads.