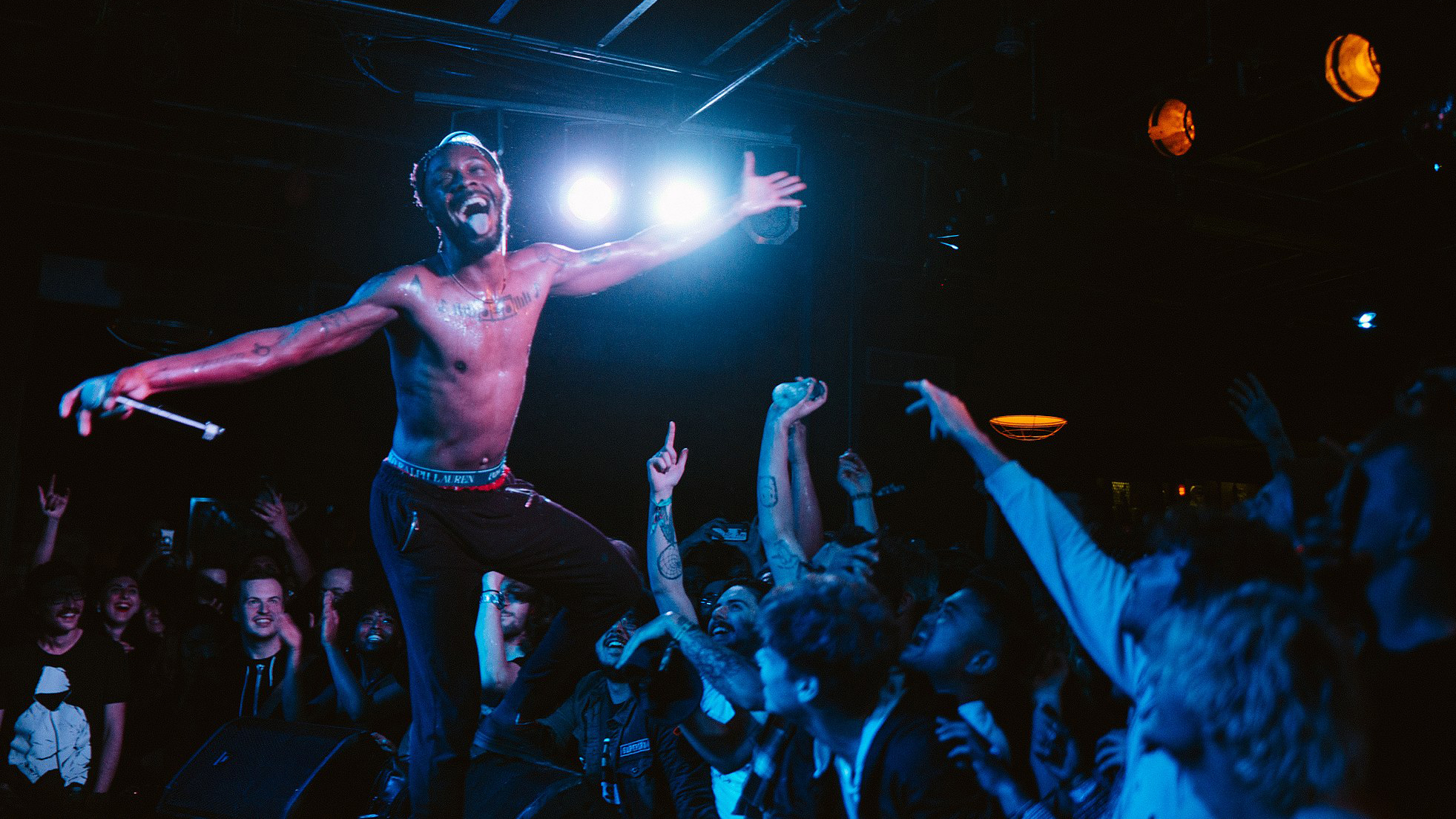 “No DJ, no hypeman, no backing track, no problem,” reads his tour poster. JPEGMAFIA makes music with no rules, no boundaries and no limits. His live performance is no different.

At the Baltimore Soundstage on Tuesday, JPEGMAFIA — nicknamed Peggy by fans — performed a tight hour and a half set at a rocket’s pace. His music rampaged through the crowd, invigorating his fans so intensely that all but two songs featured a raucous mosh pit. Despite its brevity, if the concert went on any longer I would’ve been concerned for the general safety of the crowd members.

During the opening act, Zeelooperz jumped off the stage and ran among the crowd during his final song. Afterward, he returned to the stage, threw on PinkPantheress’ “Just for me,” and left. I thought that was pretty metal, but I had no idea how much farther the main act would go.

JPEGMAFIA appears. The crowd chants, “Peggy! Peggy! Peggy!” in the most endearing way possible. He walks to the edge of the stage.

“Baltimore,” he said, saluting the crowd. “My name is JPEG-motherfuckin’-MAFIA. And you know what I came here to do.”

What follows is a frenetic haze of motion and sound. The stage doesn’t confine Peggy. He runs, jumps, crawls, dances all around the entire venue. The raw noises and digital sounds that make his music so unique blast from every corner. Water rains from above. I’m lifted off my feet by the sheer physical pressure of the crowd. Distortion grates my ears. Sweat stings my eyes. Peggy screams. The crowd sings on.

Fans shouted every word of the chorus during his explosive opening song “Jesus Forgive Me, I Am A Thot,” off his 2019 masterpiece, All My Heroes Are Cornballs. Afterward, he spun into “HAZARD DUTY PAY!,” a single fresh from his October release, LP!. Then he teased one of his biggest tracks.

“I just see beautiful heads of hair everywhere,” he said with a shrug, then screamed, “where are my bald bitches at?”

Returning to his laptop, he cued up the track and instrumental for “BALD!,” which swept through the room.

Peggy didn’t fall into the rather uninspiring trend that plagues many contemporary hip-hop performances — the vocals weren’t a part of the backing track. Instead of rapping or singing alongside pre-recorded studio vocals, Peggy’s voice was all live. This allowed for some of the best moments in the show.

At one point, Peggy left the stage completely and reappeared on the left side of the room, standing on top of the bar. He sang an a cappella version of his Carly Rae Jepsen “Call Me Maybe” cover, swinging the hanging ceiling light fixtures out of his way. Later, during “1539 N. Calvert,” named for an address in Baltimore, he initiated an energetic and explicit call and response between himself and the crowd. Some of his more aggressive tracks, such as “ALL CAPS NO SPACES” and “Rainbow Six,” were simply jaw dropping. His vocals were still unbelievably raw and impassioned as he screamed through the verses. Throughout the show, there were countless moments when Peggy briefly stopped singing and let the crowd’s voices yell back his iconic lyrics.

Peggy didn’t hold himself to just his solo work either. He performed “Puff Daddy,” produced by Kenny Beats, and covered BROCKHAMPTON’s “CHAIN ON,” in which he has a fiery feature verse.

[How YouTube became the Disney music factory of the internet]

The setlist leaned heavily on LP!, with only a sprinkling of Peggy’s earlier works. He didn’t play any songs from EP! or EP2!, and only one off black ben carson. While I do think LP! is one of his best works, I would’ve liked to hear a wider variety of his discography live. He did play several songs off of Veteran, notably his finale “Curb Stomp,” in which, not for the first time, Peggy jumped off the stage and ran through the crowd. It created a veritable cyclic implosion, the crowd collapsing on top of him and then repulsing back outwards repeatedly as his security shoved people away.

I wished this show was four hours longer. If Peggy was playing the same venue tonight, I’d buy tickets now for double the price without hesitation. This is truly an experience you can’t get anywhere else. Peggy’s performance oozes with unadulterated talent. His vocals are saturated with real emotion. His stage presence is enormous, and his crowd is unfailingly loyal. At a smaller venue, such as the Baltimore Soundstage, there just isn’t enough space to fit all his charisma and creativity. It overflows, and you benefit from the excess.