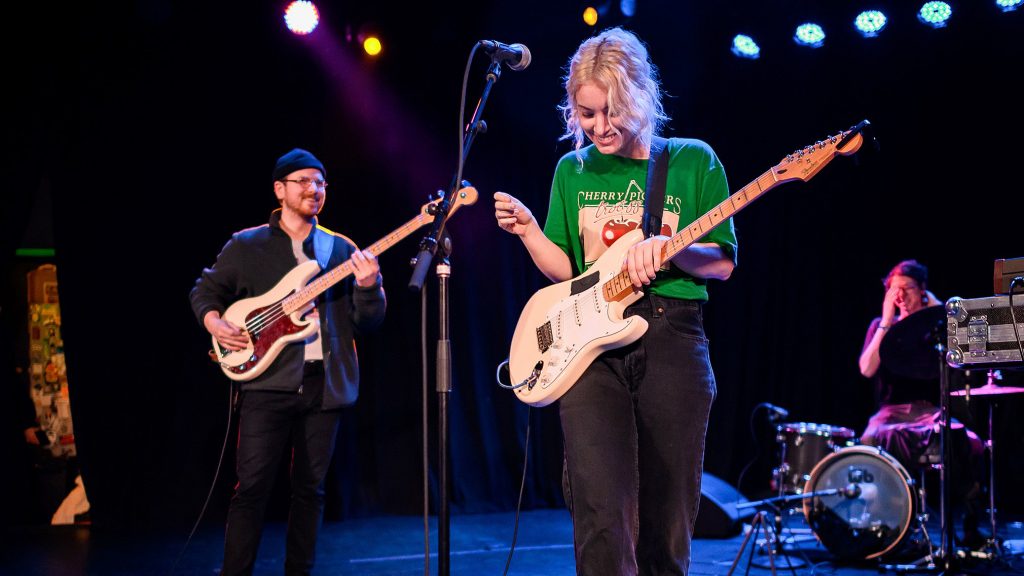 Men I Trust performs in 2019. (Photo via Wikimedia Commons)

Men I Trust, opened by Michael Seyer, performed a bright and inviting set on Oct. 30 at Union Stage in Washington, D.C. Upon arrival, warm bodies stood motionless in the concert space as they ached to hear the sounds of indie-pop-alternative singer-songwriter Seyer and the headline band.

Moments before, people had gently organized themselves into a line on the brisk, cold fall evening as they showed vaccination cards and tickets for the show.  Some fans even dressed up in their costumes, as it was the day before Halloween. Not even the masks could hide the excitement as fans stared bug-eyed at the small stage waiting for musicians to occupy it.

After 30 minutes of waiting, Seyer filled the stage with his band and special guest — Grogu from The Mandalorian sitting on the keyboard. Yes, they had a baby Yoda doll.

Roger Hallaway, Pincey Reyes, Jonathan Rivera, Jason Ayala and Antonio Aiello all accompanied Seyer with smiles and passion that ignited onstage. They mostly played songs from his recent album A Good Fool and included older tracks such as “Pretty Girls,” a personal favorite of mine.

There was even a point when Hallaway got so excited he snapped a guitar string, which further proved how into it he was.

Fans cheered with gratitude after our ears and the mind between them had been rejuvenated with sensual sounds of Seyer in the small basement of Union Stage.

After about 15 minutes of waiting, the band members of Men I Trust walked quietly on stage as fans roared with excitement and volume. Jessy Caron, Dragos Chiriac and Emmanuelle Proulx took their spots on stage and opened with “Tailwhip” from their 2019 album Oncle Jazz.

We heard their 2021 album Untourable Album live with tracks like “Oh Dove,” which featured multiphonic singing from Chiriac as he jammed out on keys. “Sugar” and “Lucky Sue” followed after, and fans tuned in without missing a beat.

Proulx thanked everyone for listening after every single song, charming us with her warm personality.

The intimate performance felt like a collaborative jam session only we had the exclusive rights to view. Sometimes, the band members would laugh and talk quietly in French on stage in between songs as if no one was listening. Listeners seemed honored to be standing in that basement as Proulx’s voice gently carried to their ears to new dimensions of sound.

With “Lifelong Song” its unique instrumentation and syncopated rhythms enchanted the crowd.

The bassist had an added instrument of playing what appeared to be a TalkBox with a plastic tube wrapped around the entirety of the microphone stand. He vocalized oscillating sound effects in the background, while Proulx’s soft melodies reverberated with excellent resonance. I was still thinking about their sound even on the way home.

My favorite part of the entire performance was Caron’s guitar solo toward the end of “Seven,” which riled up the crowd as we were waiting for this moment and this moment only.

The guitar solo lasted about one minute and the crowd cheered as every bar went by. Caron smiled gleefully for the duration of the solo as his fingers pressed the familiar frets.

As we neared the end of the show, Proulx shyly told us Men I Trust had only one more song to play. Her bandmates offered her looks of confusion as the crowd begged them to stay longer.

“Shit!” Proulx had immediately apologized as she realized they actually had two more songs left for us in the set.

We then heard “Humming Man” and finished with “All Night,” an Oncle Jazz favorite featuring Seyer’s bandmate Roger Hallaway.

The band concluded their set and exited the stage as fans stood there begging for an encore. Everyone really wanted to hear their number one most listened to song on Spotify with over 12 million streams on YouTube, “Show Me How.”

Proulx peeked back out from backstage, with Caron and Chiriac following, too. They came back for one more track and fans sang their hearts out to “Show Me How,” yet another classic indie song.

Men I Trust won over the soft and tender-hearted indieheads of Washington, D.C., with their unforgettable album.