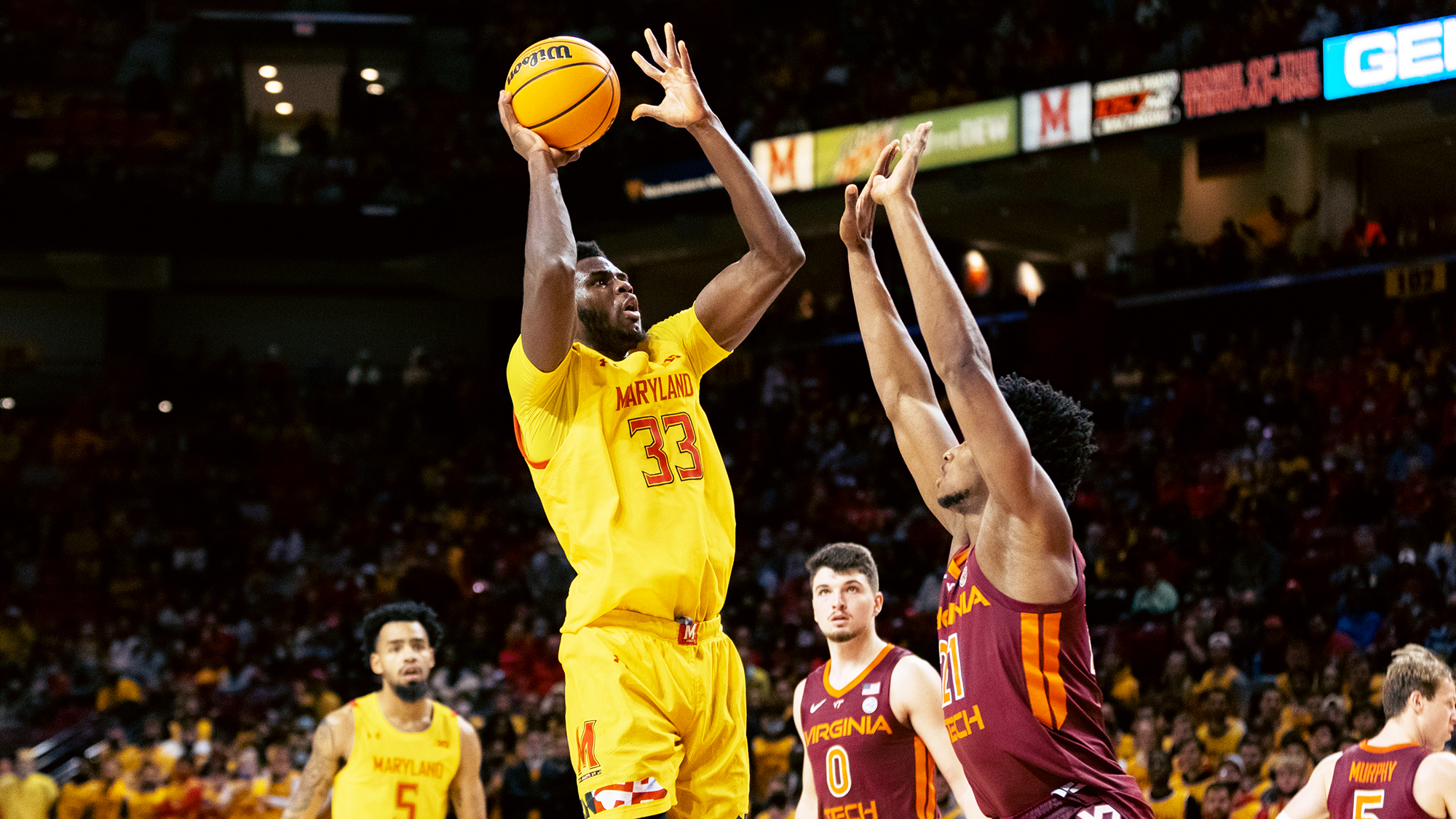 Qudus Wahab has a knack for looking unstoppable when opening games for Maryland men’s basketball.

Against Virginia Tech, Wahab made quick work to establish his presence in the paint with five points in only the first two minutes. He would go on to put up a monstrous 14 points in the opening half, the most he has scored in a single half this season.

But Wahab also has a knack for disappearing come the second half.

And he did once again during the Terps’ 62-58 loss to the Hokies, scoring only four points in the second period.

It was primarily due to his prompt acquisition of fouls in the early parts of the second half Wednesday. Wahab being unusable down the stretch is an unwelcome problem given how close Maryland’s games have been this season.

“Our offense was a lot better when he was in the game, that was clearly obvious to everyone there,” coach Mark Turgeon said. “He was good, they didn’t double him — he had a good game.”

Wahab was evidently off to a flying start, grabbing an offensive rebound from a blocked Eric Ayala shot, jamming the ball back emphatically on the Terps’ second possession.

It wasn’t the first time Wahab made a statement early. He has been one of Maryland’s most effective scorers in the first half, averaging 7.3 points in opening periods this season, the most of any Terp.

In the second half, however, that number crashes down to 4.4 points per period.

It was, by all means, a stellar opening night. He hasn’t had a particularly similar second-half performance since.

But what principally accounts for the second half lulls are fouls, a struggle to play out of double teams and a still-developing defensive skill set.

Vermont and George Mason eliminated Wahab as well as other teams have this season, stifling his ability in the paint by doubling up the center. He still managed 14 total points through both contests, but most of those points came in the first half and none in the final five minutes of either game.

“It was good, it just makes it easier for us,” Hakim Hart said. “When teams don’t double, most of the time he scores.”

So as Virginia Tech avoided applying pressure for most of the game, it would figure Wahab would keep the pressure on. But those pesky fouls got to him.

After picking up his third foul by the 15:02 mark in the second half, Wahab was forced to take a seat, stalling any momentum he brought into the period.

He finally re-entered the game with 10 minutes left, but a minute later, he would pick up his fourth foul. The next chance he could, Turgeon took him out of the game again.

“You still kind of feel as though, ‘Aw man, one of our bigs went out,’ but we still pick him up and make sure he’s still fine and stuff like that,” Donta Scott said. “Just keep his head up.”

Wahab would get another run on the court with under six minutes to play, but while on the court, the team went from a three-point deficit to a seven-point deficit. Julian Reese was chosen for the final 2:39 at center over Wahab.

“Quite frankly, he just made some big-time defensive mistakes,” Turgeon said. “That’s why we went back with [Reese]. Juju guards a little bit better out there and recognizes things a little bit quicker.”

It’s been frequent that Wahab loses out on playing those final few minutes for Maryland, often in favor of Reese. While Wahab averages 10.8 minutes on the floor in opening halves, he gets 8.9 minutes per second half.

Against Hofstra, Wahab didn’t even appear in the second half as Turgeon decided to go smaller for the remainder of the game. He had played fairly well, going 3-3 from the floor, but he still found himself on the bench for 20 full minutes.

Whether it be fouls, pressure from other teams or his own defensive stumbles, Wahab is missing out on minutes the Terps will need him for as the season rolls on.

“He’s getting better defensively, he’s just gotta keep working on it,” Turgeon said. “It was a hard matchup for him tonight..”