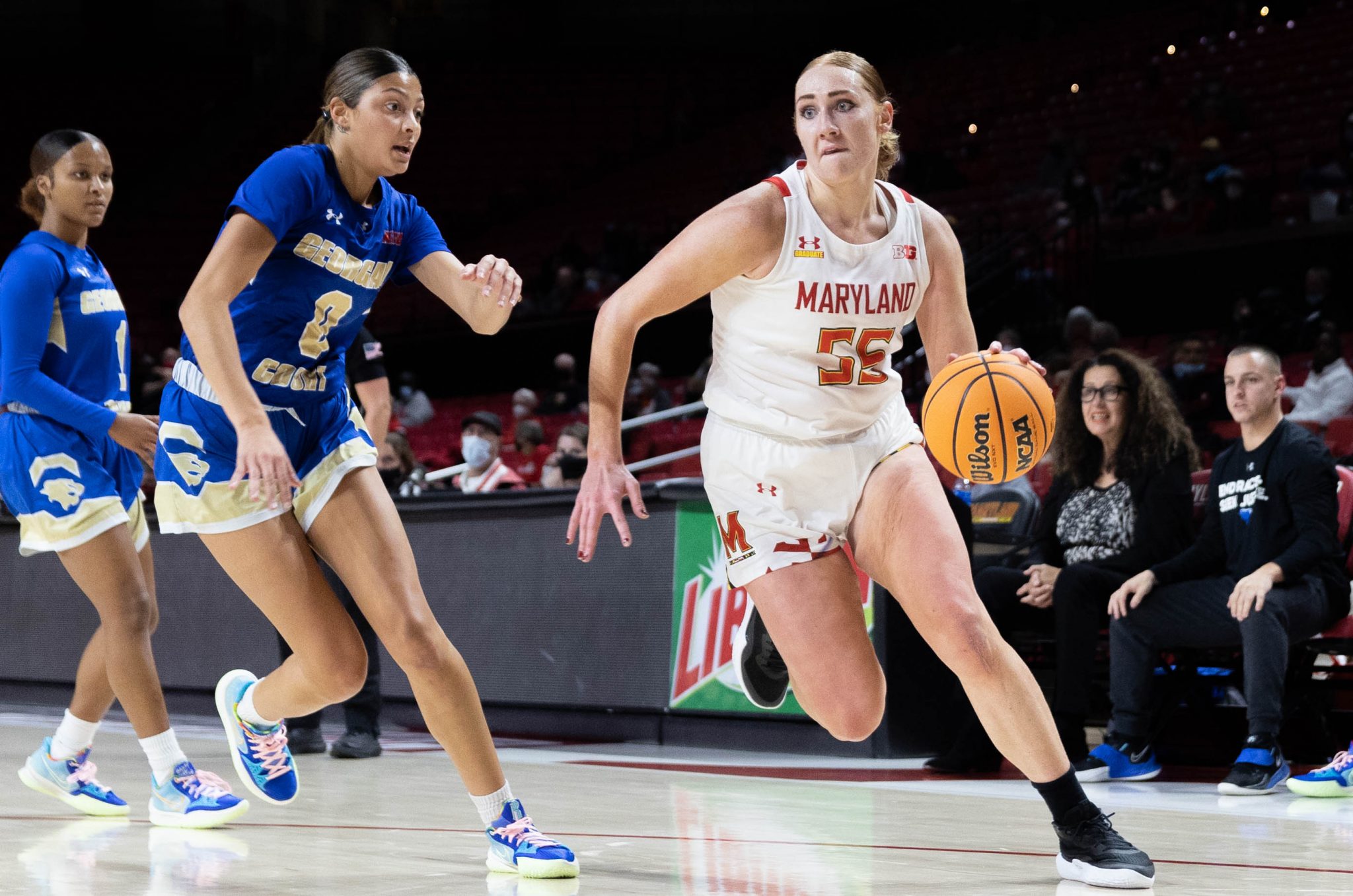 Angel Reese threw her hands out, standing and staring at the referee in disbelief before putting her hands on her head. She’d just picked up her fourth foul of the game early in the third quarter against Stanford, with her team already shorthanded.

The sophomore and her Maryland women’s basketball teammates were the rare unhappy travelers to the Bahamas after they completed an 0-2 Thanksgiving week with a similarly rare beatdown at the hands of the No. 7 Cardinal, 86-68.

It’s the first time coach Brenda Frese’s team has lost consecutive games since the 2017-2018 season, when they lost three straight to Purdue, Minnesota, and Michigan.

“The biggest thing I’m disappointed was our lack of competing today,” Frese said. “I thought we showed our [emotions]…we lost our poise, we lost our composure early in this game…they outworked us, outhustled us…for 40 minutes.”

Maryland played without Katie Benzan, Diamond Miller, Faith Masonius, and Channise Lewis and it showed, particularly on offense for what was expected to be one of the nation’s best.

Frese’s squad scored under 80 points for the third straight game and shot a dismal 30.9%. They had more turnovers, with six, than three-pointers, four, at the end of the third quarter.

“I think [not having Benzan] impacted us a lot,” Owusu said. “Katie is a great shooter and she spaces the floor out, I think we were missing that piece.”

Her coach echoed a similar sentiment and dismissed any concerns about the offense beyond the injuries.

“You’re doing your best with what you have available right now,” Frese said. “So I’m not worried about [the offense] once we get them back into the fold.”

On the other sideline, Stanford dominated from behind the arc. It shot 40% on threes, going 10-of-25. Cardinal guard Hannah Jump made seven threes in the game, more than the entire Maryland team did all game.

After Chloe Bibby knocked down a first-quarter jumper to give Maryland a three-point run, Stanford immediately countered with a 7-0 run of its own.

Owusu looked like she quieted that down with a nifty hesitation move that led her to a layup but Jump knocked down her third three of the quarter as the buzzer sounded to give the Cardinal a seven-point lead at the end of the opening frame.

That deficit would only grow in a dismal second quarter.

Frese’s squad scored nine points in ten minutes, shooting 28.6% from the field and turning the ball over four times. Bibby kept the Terps afloat early with 12 first-half points but couldn’t continue that effort, going 0-of-6 in the second half.

“I felt like we lost our minds in that quarter,” Frese said. “What didn’t happen between Ashley getting a foul and a tech and emotionally, mentally we were not very good.”

In the final frame, Maryland’s offense stopped sputtering and instead ground to a complete halt from the field. It made 12-of-14 free throws against Stanford’s bench unit but shot 3-of-17 from open play, including a drought that lasted over six minutes without a field goal.

That’s step one for Frese and the Terps, get healthy and improve the offense. They’ll have to, as conference play begins against Rutgers on Dec. 5 and a matchup with No. 1 South Carolina looms shortly after.

“I know the remaining games we have left, there’s nothing easy on the schedule, so it’s going to grow us up quickly,” Frese said.