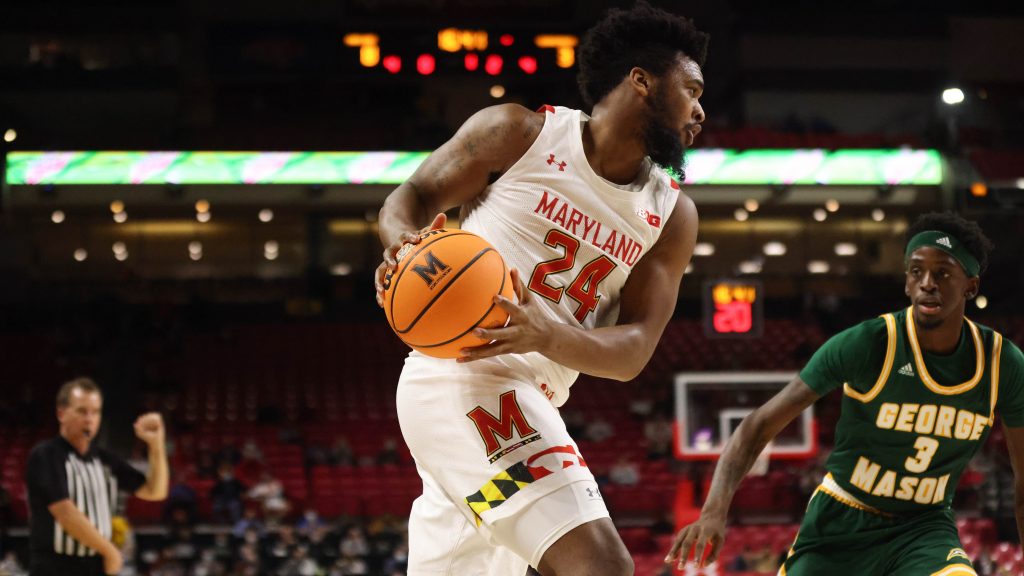 With just over a minute left and down five, Maryland men’s basketball coach Mark Turgeon called one of his final timeouts. The Terps needed to set up the right play to give themselves a chance at completing a comeback in the Baha Mar Hoops Bahamas Championship game against Louisville.

After a rough first half where Maryland struggled to bring down rebounds and allowed the Cardinals plenty on their own offensive end, it would all come down to finding the ideal shot.

The Terps went to Donta Scott, who had been shooting well to that point in the second half. After faking a three-pointer multiple times, he began to drive.

His shot was off-balance and heavily contested, but it still reached the rim. However with each bounce on the rim before petering off and into the hands of a Louisville player, Maryland’s shot at another come-from-behind win and the championship trophy dissipated.

“We were trying to get a quick three for Donta, just didn’t get it,” Turgeon said. Our execution, I’ll tell you what, we got work to do…he just held the ball for seven or eight seconds and then he drove in there and shot a crazy layup. It’s a play that’s worked for us before, it didn’t work there.”

The Terps couldn’t get the job done down the stretch against the Cardinals (5-1), dropping their second game of the season, 63-55.

Rebounding and second-chance points was the name of the game as Louisville doubled Maryland in the rebound battle, 51-25.

“Our whole game plan was to box them out and rebound and we didn’t do it,” Turgeon said. “I don’t know if I’ve ever had a team get beat that bad on the boards.”

After missing five of their first six shots — setting up what would’ve been another slow start for the Terps (5-2) — Turgeon’s squad hit six of their next 10 attempts to take the lead, 18-13.

Scott in particular struggled in those first few minutes, but a steal in transition that he took for an easy dunk began to turn the tides.

Maryland’s 9-0 run was a welcome sight for a team that has not held the lead often in the first half this season. However, a six-plus minute drought from the field by Louisville only yielded a seven-point lead for the Terps.

Acting head coach Mike Pegues’ team was sloppy to open things up with 10 turnovers and fouls in the first half, however the majority came early enough that it didn’t kill their chances to reassert some pressure.

So, when the Cardinals inevitably started cracking down Maryland’s defense, they took full control.

Louisville hit seven of 10 shots to take a five-point lead late in the opening half. And though it was likely the Cardinals would be able to claw their way back into the game after starting 21% from the field, rebounding made it even easier.

The Terps were dominated on the boards in the first half, with 12 to Louisville’s 29 and one offensive rebound to their opponent’s 12.

“We were doing a really good job getting that first stop but we just kept giving them second chances,” Fatts Russell said. “When you give a team chance after chance after chance, eventually the ball is going to go in the basket.”

A 32-27 deficit at the half is a familiar spot for Maryland, but there was every opportunity for the Terps to seize an advantage — and they didn’t.

The second half started more of the same as defense took over and shots avoided the net for both sides.

Maryland and the Cardinals matched each other shot for shot, except it was simultaneous 1-7 shooting.

Scott finally broke through with a layup, followed shortly after with a pair of threes that began closing in on the Cardinals’ lead.

With the game so close, it would only require one team to put together a string of makes from the field to give their side an edge.

Maryland found that run. Buckets from Scott and strong drives from Julian Reese and Eric Ayala pushed the Terps in front.

Reese had been relatively quiet through the first half, but came through in a crucial moment as Maryland tried to build momentum. A drive just inside the edge of the paint saw Reese fouled, but not before he was able to get his layup off and in the basket.

Just as the Terps found the run they needed, the Cardinals found theirs. Hitting six of seven shots to take the slight lead meant Maryland would need to show some of the comeback ability it flexed against Richmond Thursday.

With a minute left the Terps needed to draw up the right play to get the game within one possession, but they couldn’t find it and fell, 63-55.

“It was just set for us to try and get a quick three,” Scott said. It moved a little faster than we wanted it to be when we got on the court.”