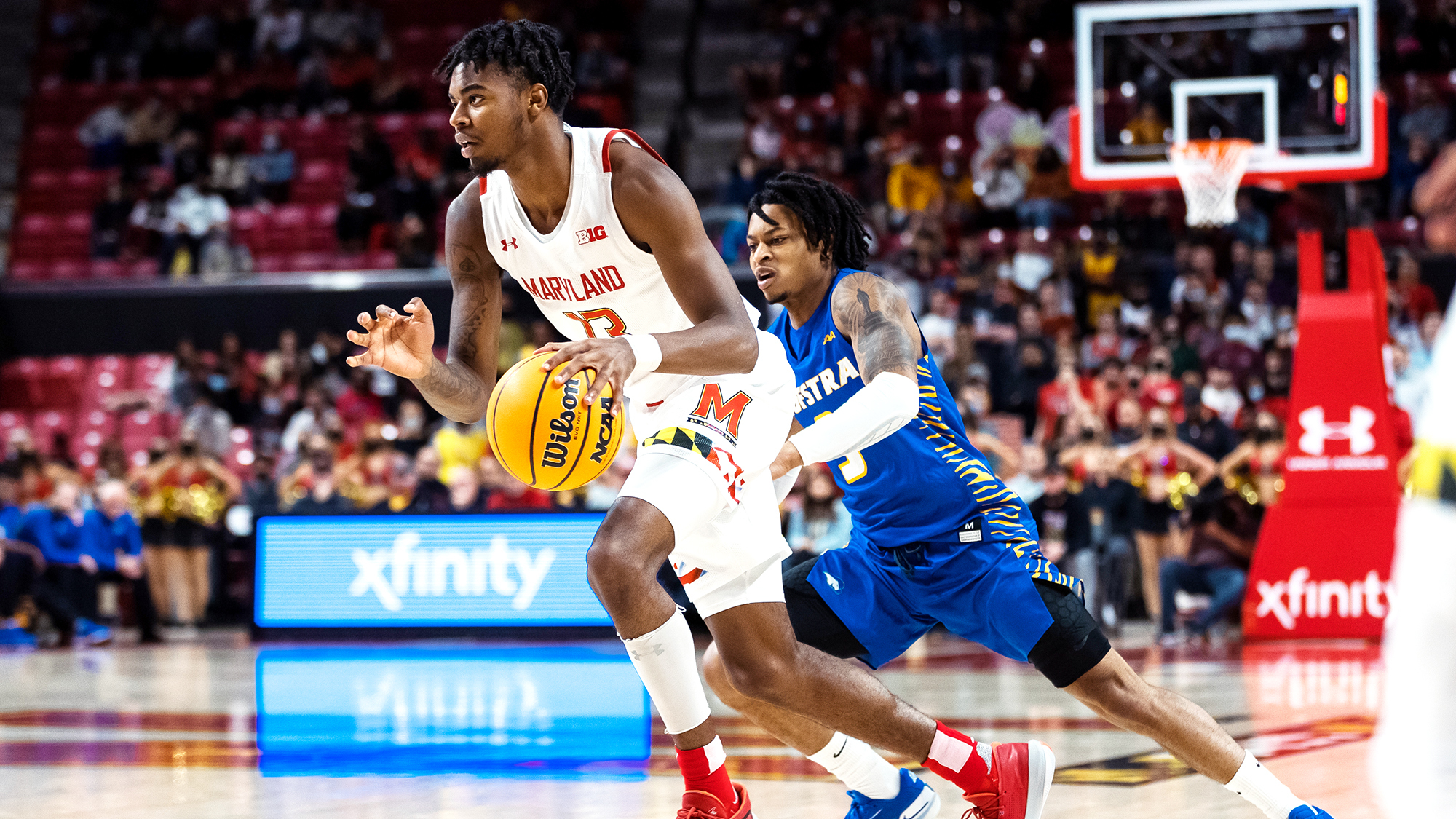 Maryland men’s basketball was finally rolling on offense. It had been a laborious task to put up points in the opening half of the Terps’ matchup with Richmond, but with a new half came new life to their shooters.

Hakim Hart pushed Maryland forward in a game that looked dire with a handful of baskets. But with one shot, he delivered in a big way — a three-pointer as the shot clock rang out gave the Terps their first lead in 23 minutes of gametime.

As Hart delivered clutch shots for the Terps, he was able to spur his team on to a close win over the Spiders with a season-high 24 points in the semifinals of the Baha Mar Hoops Bahamas Championship, 86-80.

“It felt pretty good out there, that’s all I can say for right now.” Hart said.

Eric Ayala had his strongest start to a game this season against Richmond, sinking his first four shots, all coming inside the paint. For his first bucket — and the Terps’ first of the game — Ayala went coast-to-coast after grabbing a loose ball and finishing past a Spiders’ defender.

Besides Ayala, Maryland’s (5-1) shooting struggled throughout the half. Starters Donta Scott and Qudus Wahab shot a combined 1-of-9 from the field in the opening half.

Wahab did find success from the free-throw line with five makes in the first half, but the Terps’ big-men struggled to get in the game early on.

Meanwhile, Richmond (3-3) was rolling on offense, shooting 51.4% in the opening period. The Spiders have been a strong first-half team this year, so an efficient first 20 minutes was little surprise.

“Every mistake we made, which was quite a bit in the first half defensively, they made us pay,” coach Mark Turgeon said.

Hart was the one to break a four-plus minute scoring drought from the Terps, which allowed his squad to bring the scoreline back in their favor.

It didn’t last terribly long. A 26-26 game quickly became out of hand as Maryland couldn’t buy a basket and the Spiders sank 12 consecutive points.

Ayala finished out a 14-point opening half with two threes to bring the Terps within double digits at the break, 41-32.

The second half couldn’t have started any different from the shooting lull that was most of the opening period. Led by seven points from Hart, Maryland closed the gap with an 11-1 run that put the two sides neck and neck.

“Nobody wants to be down at halftime, but that shows the fight that we have in each other,” Hart said.

The Terps and Richmond traded blows with Tyler Burton getting five straight points, followed by a string of scores from Ian Martinez and Russell.

As the Spiders began to pull away, Maryland was there with a response. With an eight-point lead in hand, Richmond looked poised to put itself out of reach.

But Scott was there to shift the momentum.

Although his shooting hadn’t been a highlight throughout the contest, he knocked down a contested three. His make was followed by two scores in transition from Hart and Russell.

Hart’s three gave the Terps a lead — and Russell and Wahab delivered some insurance for Turgeon’s squad.

Wahab took another trip to the line and sank both attempts and followed it up with another make from the field, to reach 13 points for the night. Russell came up with another key basket, with a deep three that created separation Maryland hadn’t had all night.

“It was a great second-half comeback,” Turgeon said. “The guys showed me a lot about themselves tonight. The effort that they played with in the second half was just terrific.”

As the game came down to free throws, Hart drained his pair and Ayala sank three straight to finish out the game and come away with an 86-80 win over the Spiders.

The Terps await the winner of the Louisville-Mississippi St. game in the championship match on Saturday.

“We’re starting to hit our stride as a team,” Ayala said. “What I’m enjoying so much about this trip is that we planned for a championship. We’re in a championship game now on Saturday. It’s helping us build that winning mindset.”