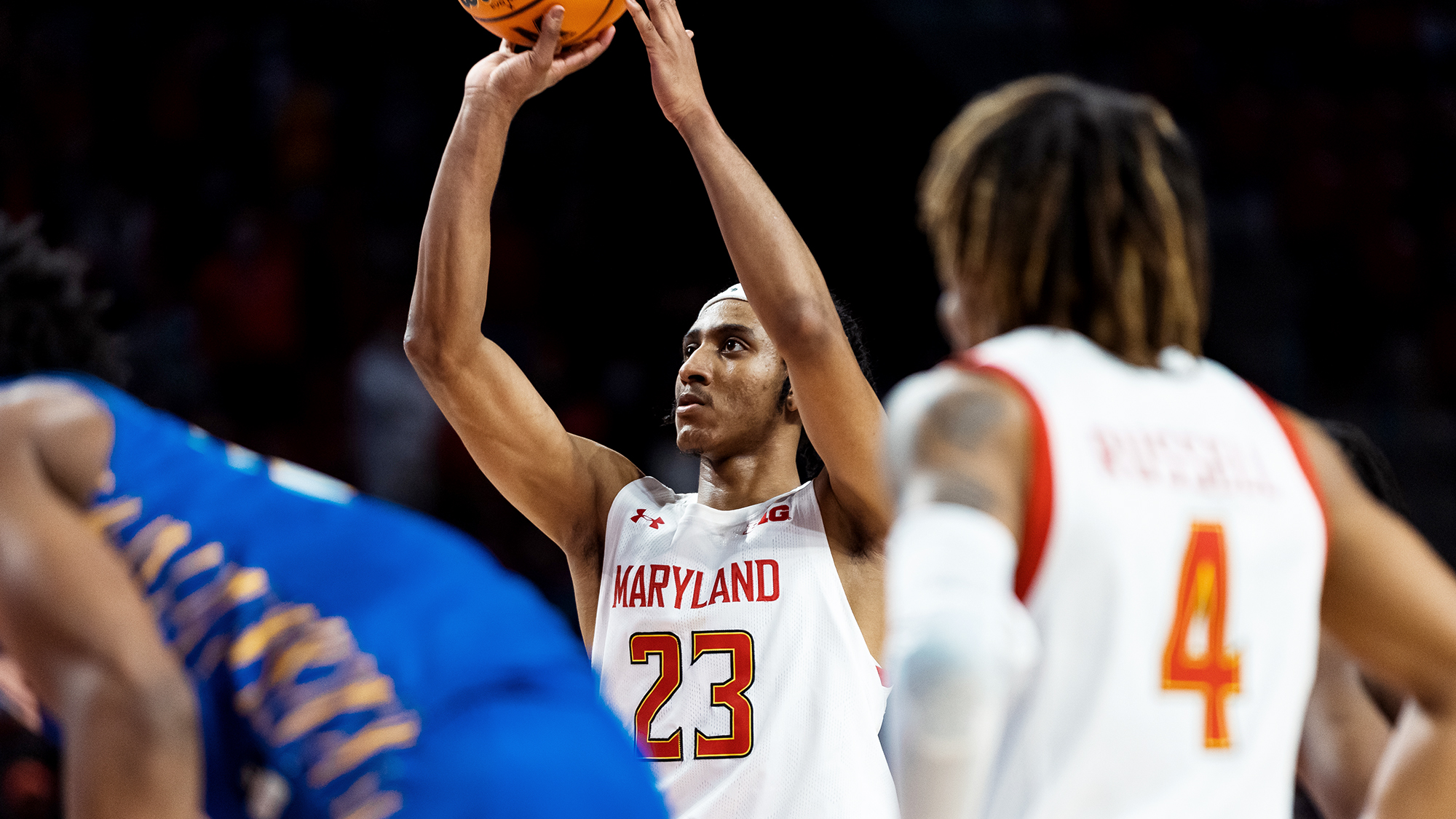 Ian Martinez shoots a free throw in the second half of Maryland men's basketball's 69-67 win over Hofstra on Nov. 19, 2021. (Cam Andrews/The Diamondback)

Wahab’s impact on the team since his transfer from Georgetown has been palpable — he finished with a double-double against George Washington, and he’s the first Terp to post 17+ scoring in both his first two games since 1998.

But at halftime against the Pride, coach Mark Turgeon leveled with his best big man.

“I said, ‘Q, this might not feel right, but I’m going small,’” Turgeon said. “Tonight … I had to figure out how to win the game. And it was lineups we haven’t practiced, it didn’t always look great, but it gave us the best chance to win, and Q was good with it.”

His strategy worked. The Terps came out on top after a tight race with the Pride, 69-67, in part due to the increased playing time of Ian Martinez.

In the first half, Martinez gave his team a 32-31 lead with a fast-break dunk that sent the crowd at Xfinity Center into an excited frenzy. And Martinez’s only two free throws of the game were the final two points that gave Maryland the edge over Hofstra.

The Costa Rica native dropped 13 points against the Pride, tied for second-most on the team with Fatts Russell.

And Russell, like the rest of Turgeon’s squad, knew Martinez could play to the high standard he met on Friday.

“This is the Ian that we see every day,” Russell said. “He’s just tremendous. He can shoot it, he can score it.”

With Wahab sidelined, Turgeon played Julian Reese in his place. And although the 6-foot-9 Baltimore native isn’t small, some of his talents are better suited for small ball than those of his counterpart, Wahab.

“[Reese has] such good feet, so you can play him in a game like this,” Turgeon said. “He can play a lot of different ways. He can guard bigs, he can guard smalls.”

Reese’s versatility allowed him to shine against Hofstra. He amassed 10 points, pulled down six offensive rebounds and made two key blocks to help his team reach and maintain their lead. One of his blocks in the second half landed in the hands of Eric Ayala and resulted in Donta Scott’s powerful dunk.

And Reese’s part in the Terps’ win wasn’t limited to his presence at the basket.

Martinez used up one of Maryland’s fouls-to-give, with three seconds left and a slight lead. The resulting inbound pass gave Hofstra the perfect opportunity to reset and tie the game to force overtime.

But Reese did what he did best for the majority of the game: He got in the Pride’s way. He jumped up and down and waved his arms in front of Aaron Estrada.

When Estrada released the ball from the sideline, Reese smacked the ball out of bounds and pushed the next inbound pass back about 10 feet. And finally, he set Russell up to make a steal backcourt to secure the game for the Terps.

“I looked into the inbounder’s eyes, I knew he was kind of frightened by me, so I was just kinda playing with him,” Reese said.

The decision to not play Wahab seems far from permanent given his presence on Maryland’s roster. But the free spot on the court highlighted the depth of this new-look squad.

Both Martinez and Reese showed their ability to make clutch plays, and their teammates and coaches are building trust in them with every single one.