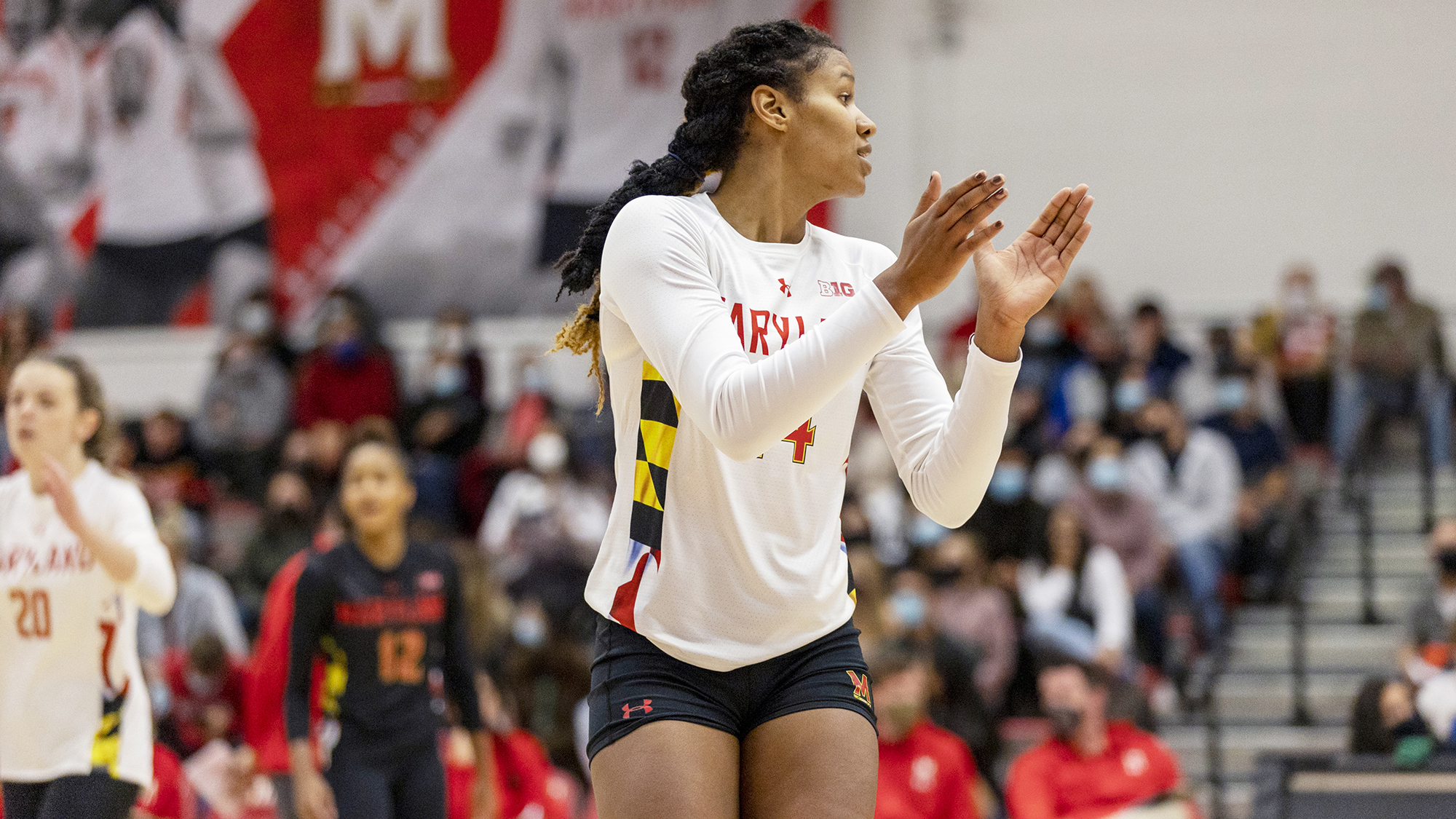 Cara Lewis talks with her teammates during Maryland volleyball’s 3-1 loss to No. 8 Purdue on Nov. 5, 2021. (Cam Andrews/The Diamondback)

Maryland volleyball needed a shot in the arm Friday evening.

After the Terps strolled to a two-set lead on the road against Northwestern, the Wildcats flipped the match on its head with a barrage of offense to force the Big Ten bout to a deciding fifth set.

With his squad suddenly in danger of dropping its fifth consecutive match, coach Adam Hughes turned to his bench in hopes of stifling a Northwestern offense firmly in its rhythm.

“I thought Cara Lewis did a phenomenal job being put in a tough spot in the fifth and kind of giving us some life and energy by making a few plays,” Hughes said.

Lewis, who has played in limited fashion throughout the season after suffering an early ankle injury, bounded off the bench and into the fray to start the final frame at Welsh-Ryan Arena.

After not seeing the floor until the fifth set, Lewis’ presence brought fresh legs to Maryland’s side of the floor.

Lewis’ impact on the game was immediate.

[Maryland volleyball continues struggles on the road, swept by Illinois, 3-0]

With the Wildcats clinging to a one-point edge early in the fifth set, Northwestern outside hitter Ella Grbac rose and sent a kill attempt spiraling over the net. Lewis and Sam Csire met the attack at its apex, walling the spike back to the ground to knot the set at five apiece.

“I just wanted to be the best I could be for the team and the program,” Lewis said. “I did what we do every day in practice and listened to what we did in the scouting report, so I just applied that to the game and hoped for the best.”

Lewis’ impact play sent Maryland’s bench into a frenzy, reinvigorating Hughes’ squad in the most pivotal moment[ of the match. And while Northwestern star outside hitter Temi Thomas-Ailara initially responded — pummelling home her 21st kill of the match on the subsequent point — Lewis wasn’t done making her imprint on the fifth set.

Thomas-Ailara continued to apply pressure on Lewis and the Terps just moments later, sending a missile toward outside hitter Paula Neciporuka in the back row. Neciporuka redirected the sizzling shot to Sydney Dowler, who popped a set directly into Lewis’ wheelhouse.

Despite two Northwestern blockers challenging Lewis in hopes of rejecting her attack, she wouldn’t be denied. Lewis punched a powerful kill through the heart of the Wildcats’ defense, tying the set at six as defensive specialist Kaylee Thomas playfully pushed her in excitement.

Both teams continued to trade shots in the closing moments of the match, an encapsulation of the Big Ten slugfest as a whole. But another Lewis kill moments later pushed Maryland’s lead to three late in the frame. Lewis and Csire once again connected on a stifling block assist on the final point of the match to snatch a road win against a talented Northwestern foe.

A win that, according to Hughes, Lewis had played a massive role in capturing.

“When we say ‘making plays’, sometimes it’s … not something you train necessarily, just gotta make an effort, pursuit play,” Hughes said. “[Lewis] did that. She did a good job at the net, and I thought she blocked a ball or two, got a good kill on a great save from Syd Dowler late in that fifth set, so I thought she was part of the difference tonight.”