Maryland volleyball continues struggles on the road, swept by Illinois, 3-0 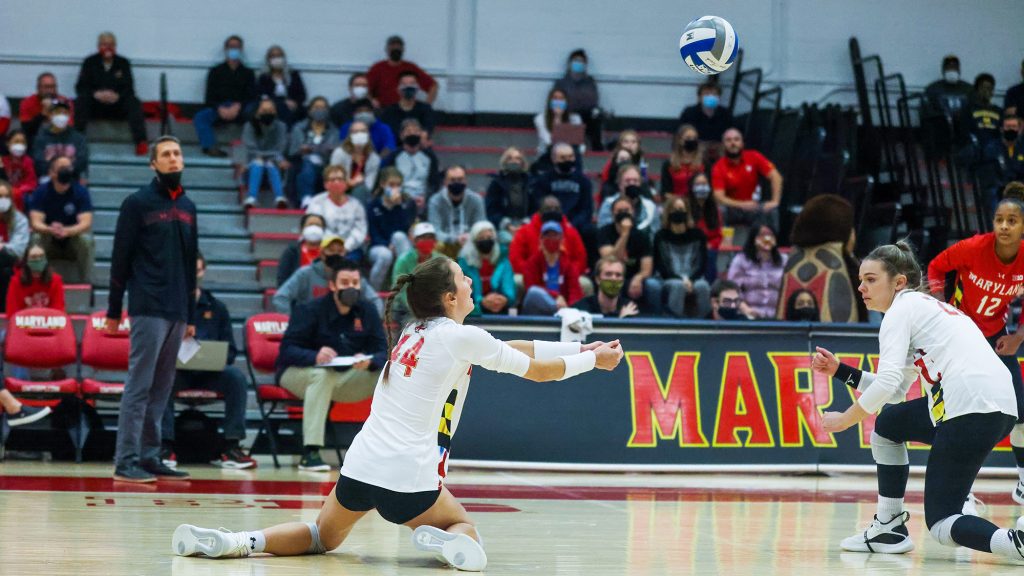 After a deftly-placed Paula Neciporuka putaway gashed Illinois’ defense, a powerful service ace on the subsequent point gifted Maryland a much-needed momentum boost deep in the third set of action in Champaign, Illinois.

But the point that followed encapsulated a frustrating afternoon for Maryland volleyball.

“Disappointing performance, I think if you talk to anyone within our program,” coach Adam Hughes said following the loss. “We knew this was a big opportunity, a really good team at home on Senior Day… but [we] did not execute enough to give ourselves a chance to get a win.”

The Fighting Illini opened the match at a blistering pace — an array of Raina Terry kills gashed the Terps’ block en route to a 10-5 first set advantage — forcing Hughes to burn an early timeout.

Three Illini attackers posted four or more kills in a 25-19 first set victory. Despite a five-kill opening set outburst from outside hitter Csire, the Terps were unable to slow Illinois’ offense.

“[Their] pins did really well with hitting through the block and hitting hands and really challenging the block more than a lot of teams did in the past,” Jones said.

Hughes’ squad was out-killed by seven in the first set, having difficulty finding a groove in the Terps’ final road game of the season.

The struggles would spill over into the subsequent frame.

A service ace courtesy of Illinois setter Diana Brown kicked off a lopsided second set, as the Illini rattled off four of the first five points to further sink Maryland’s hopes for a road victory.

Outside hitters Nunge and Megan Cooney captained a confident Illinois offense in the set, each connecting on a number of kills from either wing as Hughes’ squad continued to stumble.

Clocking a dazzling .393 hitting percentage, Tamas’ squad waltzed to a massive double-digit advantage in the latter part of the second set. Hughes inserted middle blocker Cara Lewis into the lineup deep in the frame in hopes of flipping the set on its head, but the Illini wouldn’t be denied.

Illinois streaked out to a dominant 25-14 second set victory to take a comfortable 2-0 lead, refusing to give Maryland any semblance of momentum in the match.

While the Terps found a flash of hope in the third set after racing out to a 4-1 advantage behind two booming kills from Csire and Laila Ricks, the final frame of the match once again belonged to the Illini.

Illinois snatched the lead out of the Terps’ grasp and never looked back. The Fighting Illini finished the match with the same fire they opened with, finishing the Terps in three sets after a sizzling Nunge spike careened off of the hands of libero Milan Gomillion to clinch a 25-17 third set win.

“We’ll get back in, watch a little film on Monday,” Hughes said. “There’s obviously a lot of things we can still correct, and it’s really important for my program and our program as a group to always be relentless in what we’re trying to do.”