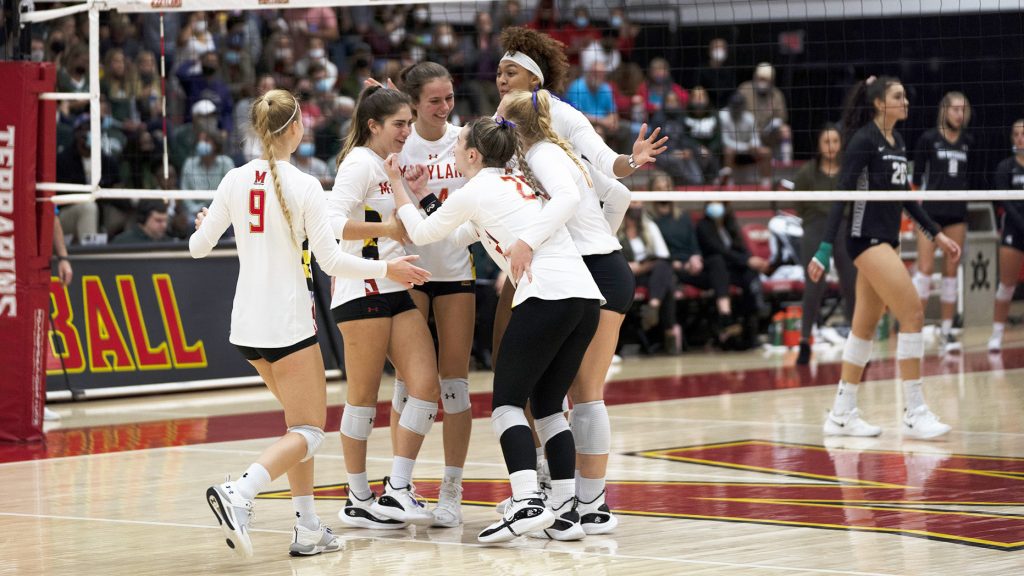 Leilani Dotson leapt off of one leg, locating a floating set on the right side deep in the deciding fifth frame at Welsh-Ryan Arena.

Dotson connected on a putaway try, only to have her shot walled back to her feet by Cara Lewis and Sam Csire for the final nail in Northwestern’s coffin.

“I didn’t think it was the prettiest match,” coach Adam Hughes said following the win. “But we talk a lot about being gritty, and we didn’t back down.”

The Terps and Wildcats traded shots early in the opening frame of the match, as both squads rattled off sizable runs to set the stage for a competitive evening.

Setter Sydney Dowler found her rhythm early to spur Maryland’s offense, notching four quick assists along with three service aces and a kill in just the first 18 points of the set.

Northwestern would eventually parry — a five-kill first frame outburst from outside hitter Hannah Lesiak trimmed Maryland’s lead to one — but Hughes’ squad wouldn’t be denied in the opening set.

Outside hitter Csire began finding the holes in the Wildcats’ block late, pummelling home two of her four first-set spikes in the latter portion of the frame to bolster the Terps’ advantage.

Despite clocking just a .178 hitting percentage, a Paula Neciporuka kill that ricocheted off the hands of two Northwestern blockers clinched a 25-23 first set victory for Hughes’ squad. Maryland, which had struggled out of the gates on the road previously, stood its ground to take a 1-0 lead in Evanston, Illinois.

Northwestern quickly found its footing in the second set.

Back-to-back Charlotte Cronister service aces put the Terps out of their groove in the opening moments of the frame, as Hughes burned a quick timeout in an early three-point hole.

The Wildcats’ advantage soon grew to six, as Alexa Rousseau converted on multiple powerful putaways to put Maryland on its heels for the first time in Friday evening’s matchup.

But the Terps wouldn’t stay down for long.

After a sizzling Temi Thomas-Ailara swing gave the Wildcats a 19-14 advantage, a stifling block assist from Csire and Hannah Thompson on the subsequent point spurred a quick 3-0 Maryland run to halve Northwestern’s lead.

“I think Milan had a really gritty game,” Lewis said of her libero. “I know she got frustrated a couple times… but she did really well.”

While Northwestern remained just points away from knotting the contest at one set apiece, four Wildcat errors in a five-point span late in the set gifted the Terps the opportunity to take a 2-0 lead on the road.

And Neciporuka wasted little time, with multiple set points in hand, popping a crafty tip-kill over the outstretched arms of two blockers to clinch a 25-23 second set victory.

Following the second set victory, Hughes’ squad came to the brink of snapping its four-game skid against a talented Big Ten foe. However, as fans of both programs have come to expect when the Terps and Wildcats face off, neither squad went down without a fight.

With the frame knotted at 19, two consecutive spikes from Ella Grbac gave the Wildcats a leg up heading into the final moments of the set.

Maryland middle blocker Rainelle Jones quickly responded, punching home multiple booming spikes at the net to give the Terps a chance to sweep the Wildcats off of their home floor.

But after a mistimed swing on Maryland’s lone match point tied the set at 26, back-to-back Lesiak kills trimmed Maryland’s set lead to 2-1 after a valiant Northwestern effort clinched the third set.

And in the fourth set, it was all Wildcats.

Thomas-Ailara continued to make an impact from the wing, slamming home eight fourth-set kills to dissect the Terps’ offense. Thomas-Ailara finished with 23 kills on the evening along with 20 digs, gashing Maryland’s block with a plethora of crosscourt spikes.

Strolling out to a seven-point advantage, Northwestern never looked back in a comfortable 25-21 fourth set victory to send the match to a fifth set — the fourth-straight five-set matchup between the two teams.

The fifth frame was representative of the match as a whole — both teams exchanged blows throughout.

But in the end, it was Hughes’ squad that exacted revenge in a thrilling 15-12 fifth set victory. Lewis shined in the final frame, notching multiple kills as well as the game’s final block to end Maryland’s losing skid.

“It’s tough to win in this conference, and especially on the road it’s really hard to win, so we’ll take every win we can get,” Hughes said.