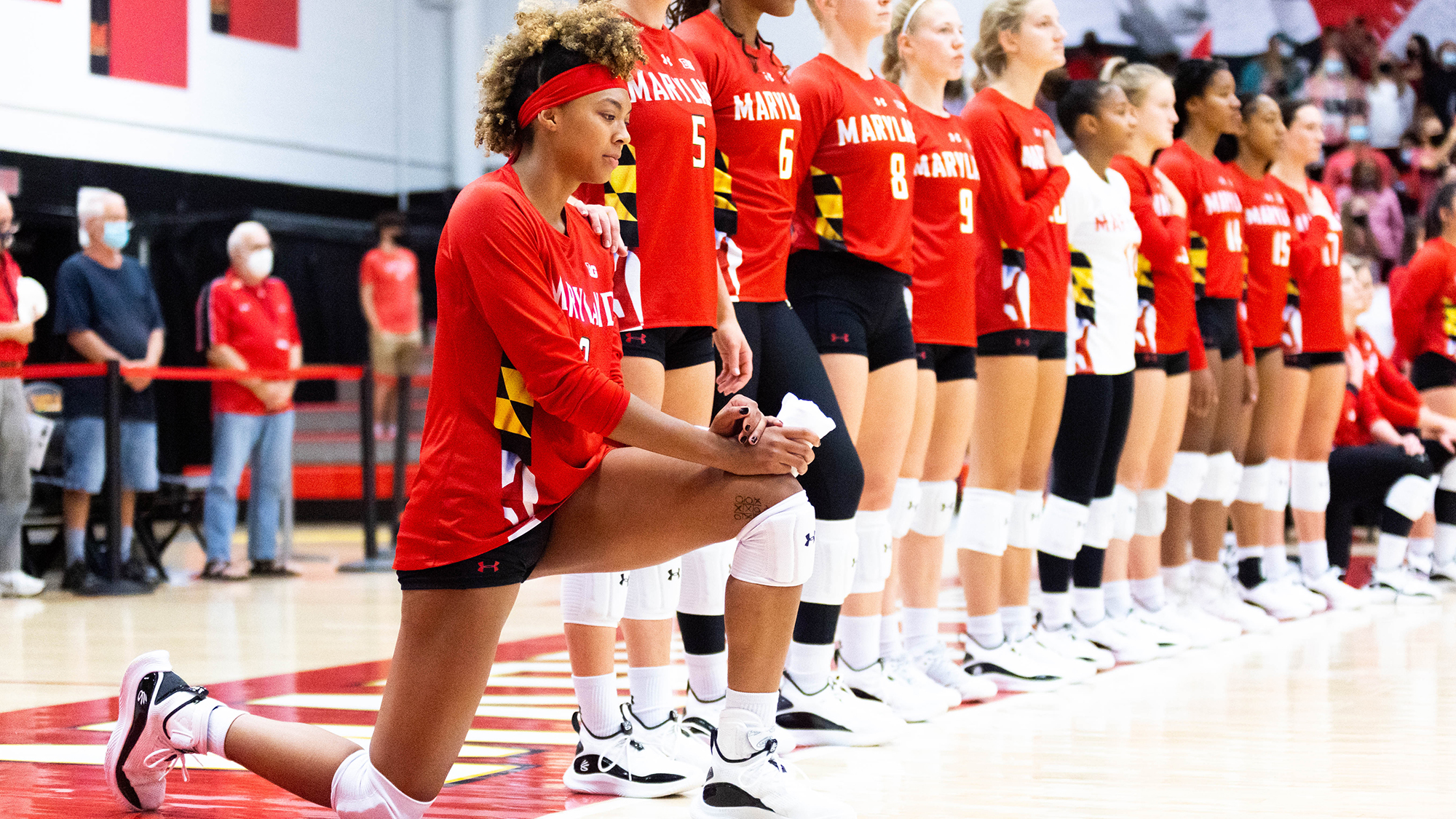 When Maryland volleyball’s Rainelle Jones was told by a spectator to “stand up, you piece of trash” while kneeling during the national anthem before a match with Nebraska, she felt a wave of emotions.

But Jones wasn’t shocked by the comments.

“I wasn’t surprised, honestly,” Jones said. “I feel like I was expecting it ever since I started kneeling back in the spring season. I was hoping that over time people would realize the reason why I’m kneeling and the reason why I stand for what I stand for.”

Jones — alongside teammates Kaylee Thomas and Maddie Naumann — has formed a routine prior to player introductions since the start of her junior season.

While other players, coaches and fans rise and remove their hats for the playing of the “Star-Spangled Banner” before matches, Jones drops to a knee — a gesture in solidarity with the Black Lives Matter movement — peacefully protesting social injustice.

This routine was disrupted Friday night at the Devaney Center, when multiple Nebraska fans shouted incendiary comments in the direction of Jones and the other players kneeling on the baseline.

“As we’re getting ready for the national anthem, a few of our players took a knee, and there was a pretty loud, ‘Stand up you piece of trash,’ and another few calls were made as well,” coach Adam Hughes recalled. “Obviously a terrible thing, not only to say to a student athlete, but in that situation … it was a very ugly moment.”

The inflammatory words stuck with both volleyball programs as they opened up their Big Ten battle.

Both the Terps and Cornhuskers seemed frazzled in the opening moments of the first set, still shaken upon hearing the calls from members of the crowd. Maryland setter Sydney Dowler opened up the match by missing a serve, one of 12 combined errors between the two squads in just the first 20 points of the game.

“I’m sure it [had an effect on us] … That’s something that we’re still going to be continuing to talk about,” Hughes said. “It’s not going away any time soon, there’s been no resolution to that situation.”

Nebraska coach John Cook stated postgame that the disruption before the singing of the anthem affected a number of his players early on in the game.

“We had a couple players that were crying and really upset,” Cook said.“I didn’t realize what was going on at the first timeout, and I kind of got on them a little bit like, ‘Guys what the heck is going on here,’ but we worked through it … but again I think that threw us off a little bit.”

Both teams eventually settled into the match — slowly refocusing on the tall task of playing Division I volleyball in front of thousands of raucous fans — but a shadow had already been cast on the evening.

Jones, who finished with five kills and four blocks in the three-set loss, said she took it upon herself to refocus her team as they dealt with the shock of the moment.

“In the beginning I feel like, on our part, we were more quiet,” Jones said. “I could tell that people were really hesitant on what to say, so I felt like I immediately had to step up and bring that quietness, that silence to an end.”

Jones and the Terps fought valiantly on the road against the 11th ranked Cornhuskers, nearly taking a set off of Cook’s squad before eventually dropping their ninth match of the season.

And Hughes couldn’t have been more proud of his star middle blocker after the match.

As the match reached its end and both teams gave one another a wave in sportsmanship, multiple Nebraska players gestured for Jones to speak to them at the net.

It was at midcourt where the Cornhuskers apologized to Jones for the behavior of their fans during the anthem.

“[The Nebraska players] apologized for their fans, and they told me that they kicked the guy out and banned him from future games,” Jones said. “[I was] letting them know the reason why I kneel, and they supported that … they showed their support way more than I thought they would.”

Following the match, Jones had limited time to process Friday night’s events before taking on another Big Ten opponent the following evening.

Just over 24 hours later, Jones once again dropped to a knee as the national anthem played over the Xtream Arena loudspeakers in Coralville, Iowa.

[Maryland volleyball unable to keep up with No. 11 Nebraska, takes third straight loss, 3-0]

But this time, Jones had Hughes standing right beside her.

“We had a discussion today about it, and I wanted to make sure that she felt supported,” Hughes said. “I’m there for her, and like I said, I’m incredibly proud of her.”

On a night where Jones moved into third place in Maryland volleyball history in career blocks, her 517th career rejection wasn’t the night’s hallmark moment.

Instead, it was Jones’ call to action that encapsulated the Terps’ evening.