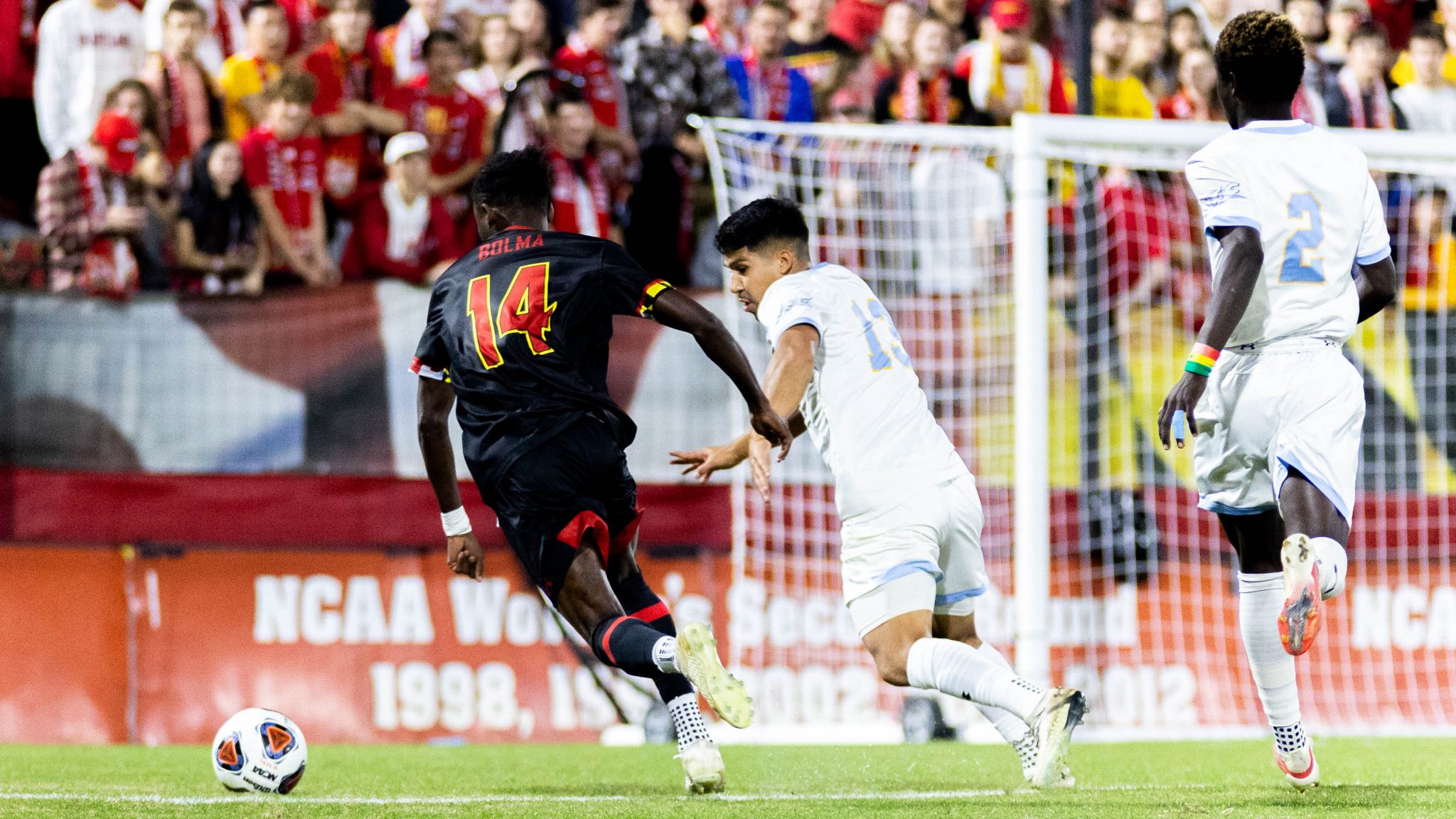 Joshua Bolma dribbles past a Long Island defender during Maryland men's soccer's 1-0 loss to the Sharks in the first round of the NCAA tournament on Nov. 18, 2021. (Julia Nikhinson/The Diamondback)

Stricken by a dose of optimism off a 7-1 start, Maryland men’s soccer had sky-high expectations for its season.

Underclassmen such as Joshua Bolma, Caden Stafford, and later William Kulvik, managed to break into the Terps lineup. Provided the fall 2021 campaign wasn’t its season, Maryland still had a mountain’s worth of talent to lean on and develop in the offseason.

And now it will need to.

After an unexpected loss to Long Island in the first round of the NCAA tournament, coach Sasho Cirovski looked to put this season in perspective.

“This has been a very difficult last two years,” Cirovski said. “I’m proud of the fact that we found a way last spring to get into the tournament after having an incredible amount of injuries. This year, we’ve had a really good year.”

Amassing a 12-4-2 record is a strong year. But what many will remember will not be Maryland’s record — it will be the disappointment.

The disappointment stems from a tie and a loss to end their season that saw the Terps let two arguably inferior teams hang around long enough to break into the game. Nonetheless, their Achilles’ heel remains their greatest source of optimism next season: the attack.

“The youth in the attack let us down a little bit but we’ll get there,” Cirovski said. “We’ll get better and stronger and [come back] with more resolve and we’ll come back fighting next year.”

The primary force up front was Ben Bender, who led Maryland on the season with seven goals, but did not score in their final two games after five straight matches with a goal.

Despite admirable performances by a defense that hadn’t allowed a goal for over 200 minutes before the Sharks slammed a winner home, inconsistencies in the attack doomed the Terps.

It was instability that repeatedly rang out at times as the season went on whenever Maryland came up short. Results such as its tie against Rutgers on Sept. 28 and its overtime win versus Delaware, strung out to be tighter than they should’ve been.

In both matches, the Terps struggled with inefficiency on shots, scoring once on 16 combined shots on goal. While sufficient enough to avoid losses in both games, it stood out as an issue that would need to be fixed for Maryland to be a dominant team.

And as it turned out, the team needed that edge to advance in the postseason. Both in the Big Ten tournament and in the first round of the NCAA tournament, the Terps lead their opponents in shots and shots on goal.

Collectively, the team had 15 shots on goal with nothing to show for it. Cirovski alluded to his teams’ lack of a “killer instinct” in its loss to Long Island.

“We did not put enough pressure on their goal with quality crosses, runs, combination play,” Cirovski said. “Things that we’ve been doing in training and looking quite sharp, did not come to fruition.”

St. Louis, which played Long Island in the next round, apparently did have the killer instinct. It won 5-1 over the Sharks off 11 shots.

To advance, Brett St. Martin said Maryland needed to emphasize the little things in the run-up to the tourney. And those small details, such as the Terps’ ability to finish, remained minor when Maryland played Delaware and Rutgers, but loomed large when it mattered.

And the absence of a relentless attacking style at times this season could be attributed to inexperience in the attack. Something only amplified by the pressure of tournament play.

“A lot of the younger guys, they’ve grown up playing in these tournament situations, so hopefully they’re a little bit used to it,” Nick Richardson said. “I guess they’ll lean on the older guys for a little bit.”

It’s over now. And the Terps will have to go on without St. Martin and some other key pieces next season. But with the amount of talent they have brewing, it’s possible they’ll have the opportunity to gain the true instinct Cirovski wants.

It’ll have to be for next year.

While undoubtedly a successful season, Maryland men’s soccer will carry this chip on its shoulder over the coming months. If the Terps’ attack turns unwavering, Maryland will look for a deeper postseason run next season.