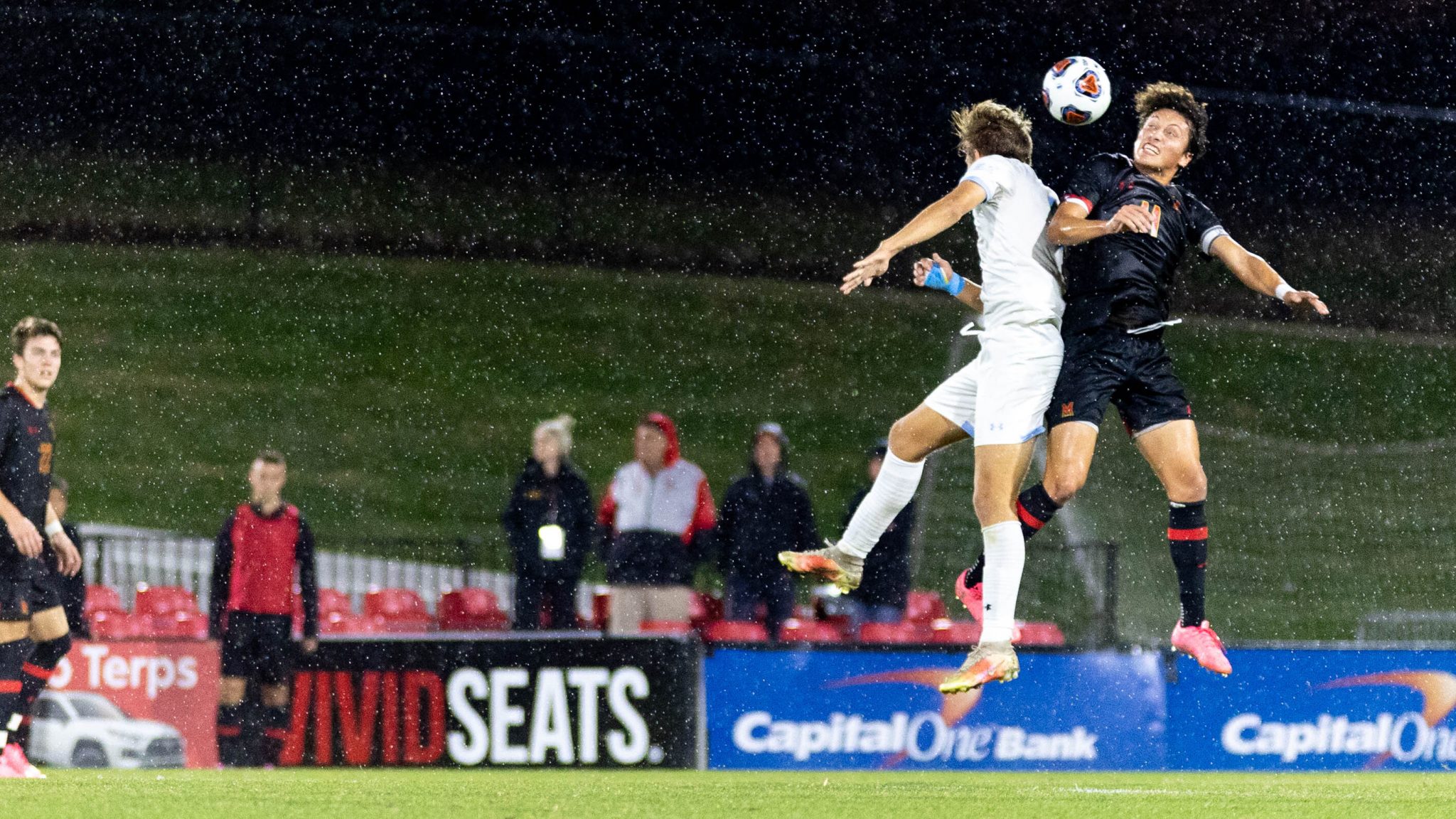 Maryland's Malcolm Johnston battles with a Long Island player for the ball during the Terps' 1-0 loss to the Sharks in the first round of the NCAA tournament on Nov. 18, 2021. (Julia Nikhinson/The Diamondback)

Something remained plain: The atmosphere at Ludwig Field looked off.

Shot after promising shot throughout the match, Maryland men’s soccer couldn’t knock one home. And with Long Island eerily sticking around, one couldn’t help but get anxious for the Terps.

It was warranted. The Sharks found their inspiration, and Assane Ben Fall cracked one right into the goal for the 89th minute dagger. Heartbreak showered Maryland as Long Island flooded the field with the joy of one more postseason shot.

In the waning minutes, the Sharks landed the winner home and sent the Terps packing, 1-0.

“Needless to say, this is a crushing loss today,” coach Sasho Cirovski said. “I felt like we never had the killer instinct, the high quality in the final third, to put one in the back of the net.”

With rain fluttering down onto Ludwig Field, Maryland held its first true do-or-die chance in its hands. All it had to do was beat Long Island and the son of a retired English Premier League player in Emil Jaaskelainen.

But the first half showed promising results for the Terps.

With the ball continually skidding and slipping along the field surface, Maryland managed to hold possession firmly and keep the ball largely out of Jaaskelainen’s feet. The Terps’ defense starred, allowing no shots in the first period.

“We were in control the entire game, they had one opportunity for 88 minutes,” Cirovski said. “But we allowed them to grow into the game and develop a sense of confidence that they could steal one. And that’s exactly what they did.”

Instead, the Sharks were thrown firmly onto their heels from the start. Maryland slotted a pair in the first minute, both bouncing off goalkeeper Demetri Skoumbakis’ hands. That set the tone for the Terps’ offense, who mainly stayed in that same vein for the rest of the period. There were plenty of chances, but they failed to quite land one.

But as a typically good second half team this season, there was plenty of optimism left on the field for Maryland.

With the rain somewhat subsiding in the second half, Long Island looked to finally add something on the offensive side. And it came from the expected company: Jaaskelainen.

He launched three shots, including a single on goal, in the first few minutes of the second half. While not threatening enough to make Niklas Neumann sweat, Jaaskelainen kept the Sharks in the game from a possession standpoint. One thing remained obvious: Long Island was sticking around.

“We played a formation that we haven’t played all year,” Sharks coach Michael Mordocco said. “[Maryland] is a proper team, and they have been for 20 years. We had to survive and our guys bought into what the gameplan was.”

But as the minutes ticked away in a game that looked to be going into overtime, it seemed the Terps would overcome the adversity, especially with Jaaskelainen limping off in the closing minutes.

And then, Ben Fall’s strike curved past Neumann. It was 1-0 Long Island.

With about a minute left, Maryland couldn’t manage so much as a shot to give it a chance to equalize. A long, successful regular season for the Terps was made irrelevant in seconds.

“I felt we were rested and recovered,” Cirovski said. “[But] perhaps we’re also a bit rusty from the layoff. This is a cruel game.”

Without Jaaskelainen on the field, Long Island pulled off the upset and sent Maryland sprawling into the offseason early. The Terps finished the season with a 12-4-2 record, and the Sharks will go on to play Saint Louis on Sunday.

“Gutted about the result, but we’ll be back next year, and we’ll get past this point and much further,” Malcolm Johnston said. “I believe that.”