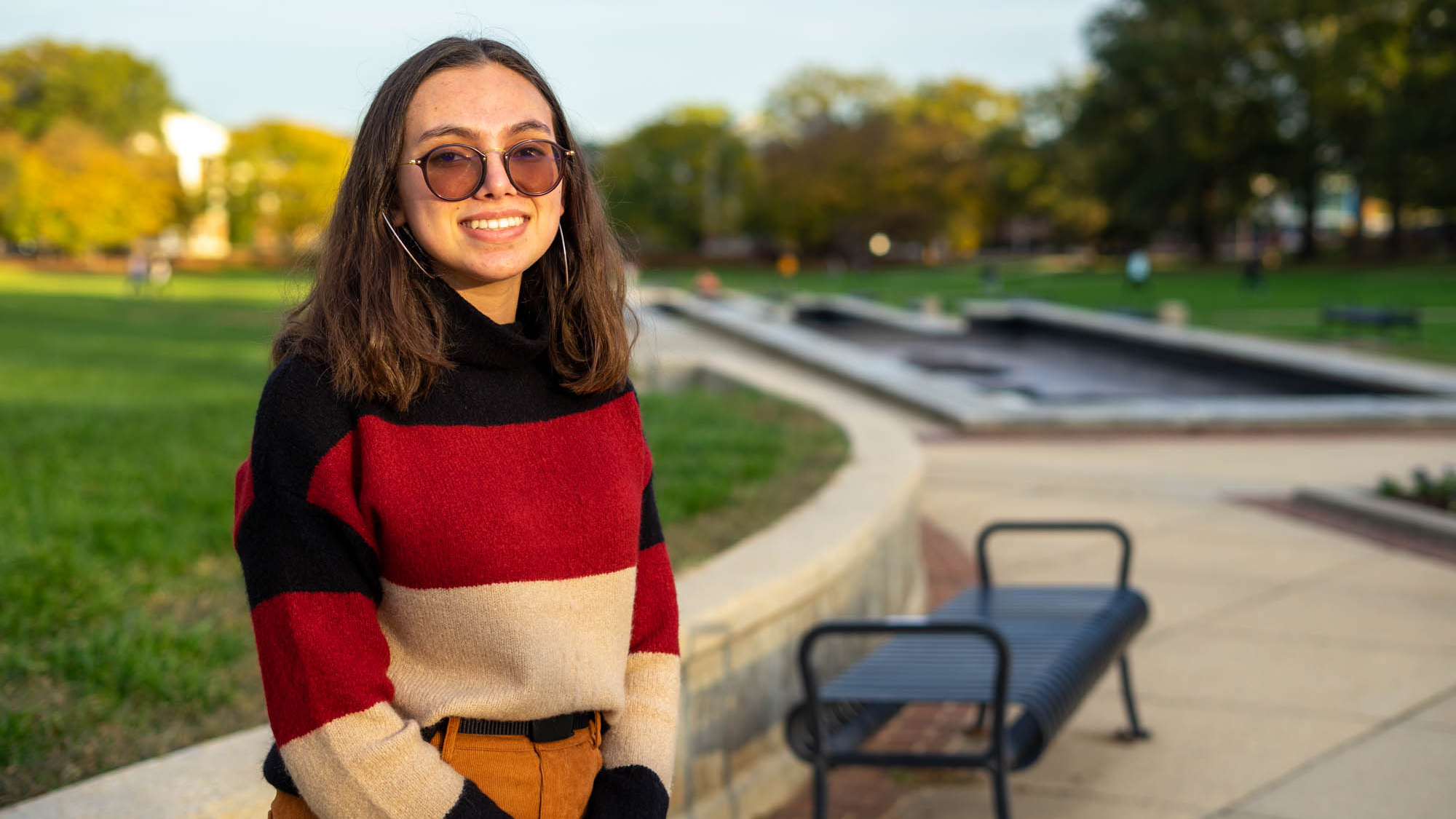 Amelia Baker, a freshman criminology and criminal justice and government and politics major, on Nov. 4, 2021. Baker feels that this university doesn't have a strong enough presence of Latinx students. (Freddy Wolfe/The Diamondback)

In her first semester at the University of Maryland, Amelia Baker has felt there aren’t many things on and around the campus that feel like home.

Baker is from Houston, which has one of the highest Latinx populations in the country. But at this university, that community has been harder for her to find, she said.

Baker said the university’s recent initiative to add a Latinx cultural center has the potential to be a place for Latinx students to call their own.

“I think it’ll be really beneficial for students mostly to be able to find a home on campus,” the freshman criminology and criminal justice and government and politics major said. “To be able to call a place yours, I mean, that’s what it’s all about.”

Some Latinx community members say the creation of the center is an important step in providing an inclusive place on campus — and some also added there can be even more resources available for Latinx students, such as more staff and faculty to support them, especially as the Latinx student population grows at this university.

Alma Figueroa, a senior family science major, is from Olney, a predominantly white city, and she doesn’t have many Latinx friends. Having a place to meet other Latinx students through a cultural center would have made a huge difference in her time on the campus, she said.

In her time as a student, Figueroa has found that multicultural Greek life chapters are the main way for Latinx students to find a sense of community — “other than that you have to find your own Latino friends,” she said.

“If the cultural center provided cool events and welcoming events when the semester starts, I feel that would have made a huge difference on the friends that I’ve made on campus,” she said.

LACS is a place for students to learn more about Latin American culture through classes and research, while the cultural center would provide students a place to meet and interact with other students with similar backgrounds.

González, a history doctoral student and member of the LACS graduate student committee, said the center was “really kind of a refuge to me.” She came to this university from Buenos Aires, primarily speaking Spanish.

She thinks having an inviting and welcoming space, such as a Latinx cultural center, would be beneficial for undergraduate students.

“It’s hard to create a community,” González said. “Community also comes with support from the institution with resources, with spaces for us to meet, to have events, to have people from the community, from the DMV area.”

For Nancy Vera, a comparative literature doctoral student and another member on the LACS graduate student committee, going to a small liberal arts college in California meant she had that sense of community. But when she came to Maryland, she was surprised to learn that many Latinos in Langley Park are disconnected from the university and its resources, despite being minutes away, she said.

“It needs to be more representative of the people who are there,” Vera said.

She feels the university can do a better job of understanding the Latinx community and providing more consistent resources rather than sporadic events throughout the year.

“These cultural centers that are coming up can help create that kind of cultural continuum,” she said. “We need to think beyond the events like, ‘What will keep people coming back?”

A cultural center would push more students into applying because it would create a safe and inclusive space for Latinx students, Baker said. She especially appreciated that the center would be alongside other centers for underrepresented groups, such as students with disabilities.

Marcus Johnson is an assistant professor in government and politics and affiliate faculty at LACS. When remembering his time as an undergraduate student at this university, he recalled how beneficial having the Nyumburu Cultural Center was.

“The visibility of other Black people and Black scholars and college students, that was really impactful,” Johnson said. “I would imagine that similar processes would work for students of Latinx heritage.”