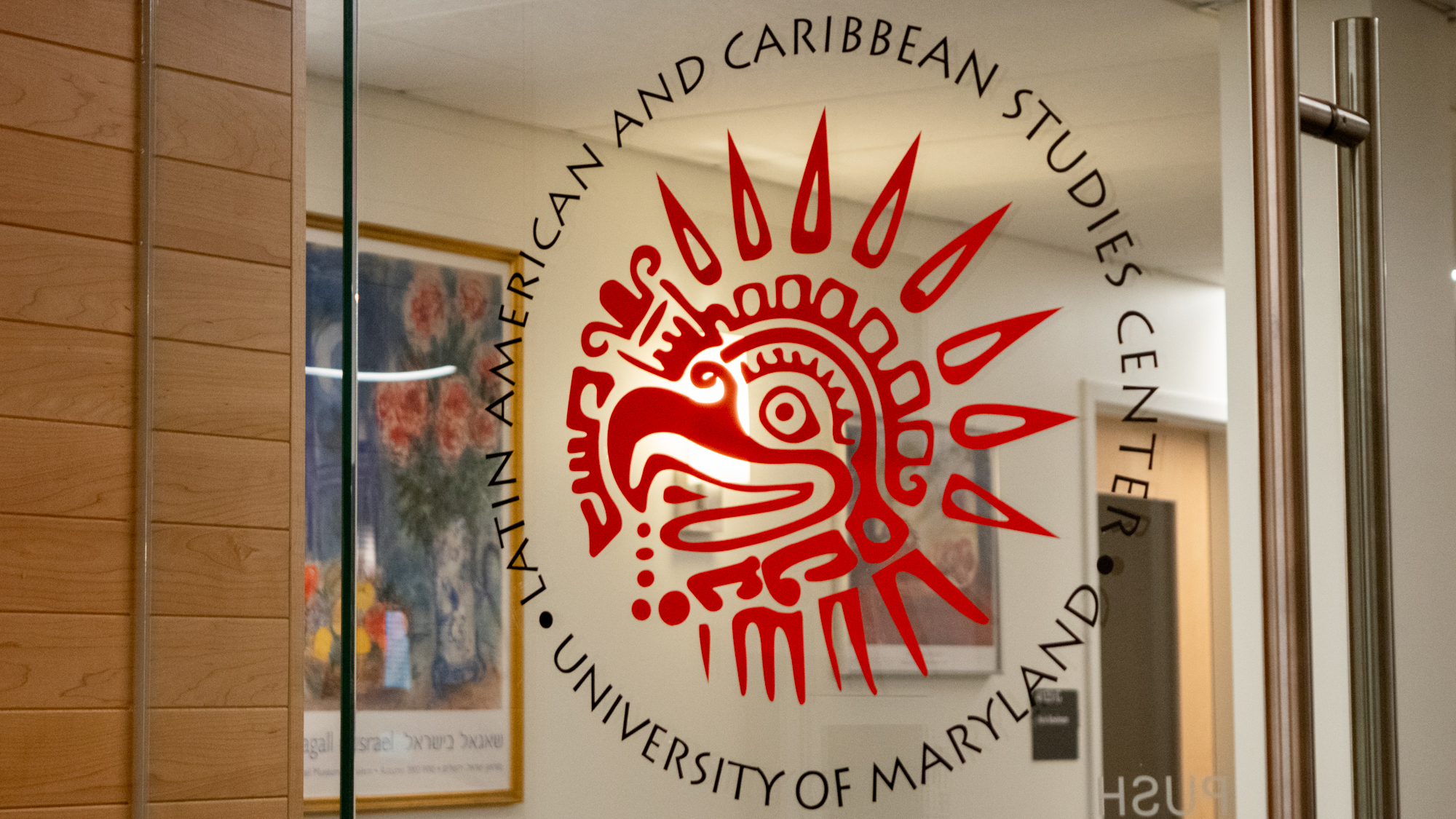 The Latin American and Caribbean Studies Center resides on the fourth floor of H. J. Patterson Hall. The mission of the center is to encourage students to learn and engage in Latin American, Caribbean, and Latinx history and culture. (Autumn Hengen/The Diamondback)

She started her doctoral program at the University of Maryland during the pandemic, she said, and she “didn’t know anyone.” She wasn’t able to meet with her professors or other students.

A year later, Azar is feeling better. She was able to find a welcoming environment in the graduate collective of the Latin American and Caribbean Studies Center.

Housed on the fourth floor of H.J. Patterson Hall, the center — which offers a minor and two certificate programs — is undergoing a period of change. Its name officially changed to the Latin American and Caribbean Studies Center last academic year, and this year, it’s welcoming a new director. But even with changes underway, the center’s mission has remained the same: fostering a sense of community among students interested in Latin American, Caribbean and Latinx culture and history.

The exclusion of the Caribbean from the center’s name has “likely resulted” in less outreach from students interested in studying areas of the wider Caribbean, such as the Francophone, Anglophone and Dutch areas, according to El Terrapino.

The Caribbean Students Association expressed its appreciation to LACS for making the university more aware of its existence as a group on campus, according to the newsletter.

“We started talking about it more seriously within the center to be just like, ‘Okay, let’s institutionalize in a way, or make clear the Caribbean components of the center,’” said Víctor Hernández-Sang, who serves as the center’s graduate assistant. “The Caribbean has always been part of the center … in the student body and in the faculty, and so on. But it was just an idea to make it more visual … and put it in the name.”

Months after the name change, the center underwent another change: welcoming new director Isabella Alcañiz to the center on July 1. She described the space as a strong community.

“People from the broader UMD community with an interest, a passion, a background, a curiosity on Latin America and the Caribbean come to the center and participate in our cultural, intellectual community activities,” she said.

Alcañiz said she is the center’s first director who isn’t from the arts and humanities college — her background is as a government and politics associate professor, under the behavioral and social sciences college.

“There’s a lot of overlap in the two colleges in terms of research and teaching interests with regards to Latin America and the Caribbean,” she said. “It’s kind of a natural fit.”

Alcañiz refers to herself as a “Latin Americanist” by training, as her research focuses on Latin America and the Caribbean. She’s worked on issues of transgovernmental and transnational cooperation in the region.

“I was born in the United States, but my family, my parents live in South America,” she said. “I grew up there, so I’ve been going back and forth for most of my life, and this has informed my professional interest.”

Alcañiz wants to “elevate” the center’s research profile, she said, as the center was historically primarily driven by research.

“We have amazing expertise in all these different disciplines — in the humanities, in the arts, literature, language, anything that has to do with digital technology, digital storytelling,” she said. “We have … affiliate faculty and we have ties to other great, similar institutions that are major research hubs … I want to pull those ties together.”

During his first year as chairman, he had a 13-day program called Latin America in the ’80s, which led to involvement at this university in Latinx issues other than literature, culture and the arts, Sosnowski said. There were panels on immigration and oil policy, for example.

As there were more and more events, he knew he wanted to create a space to discuss these issues.

“In addition to the parameters of the department, we also wanted a multidisciplinary center to address all kinds of issues that affect the population and … increasingly affect the United States,” he said.

In 1995, the center hosted its first iteration of the annual student conference, where students can present their work. The conference was originally limited to graduate students until 2015, when the conference expanded to include undergraduate capstone students, LACS alumni and artist exhibitions, according to the LACS website.

The center’s undergraduate certificate program was established in 1996, and its first cohort of students signed up in fall 1997, according to the LACS website. The minor program started in spring 2019 and helps students prepare for careers related to Latin American history and culture, according to the website.

Under the guidance of Merle Collins, who served as the director from 2019 to 2021, LACS developed a graduate certificate similar to the one available for undergraduate students.

Collins hopes the certificate’s colloquium, a key part of the program, develops as an important part of the intellectual life of the center, she wrote in the 2020 to 2021 edition of El Terrapino.

A sense of community

Blue couches and chairs line the hallway at the center’s home in H.J. Patterson Hall. The Latin American and Caribbean Studies Center’s hallway is decorated with posters advertising the center’s events.

The space is an expansion from its former home in three small offices in Taliaferro Hall. The move to H.J. Patterson Hall in 2017 allowed LACS to expand rapidly, The Diamondback reported in April of 2019.

Latinx students pursuing any degree have come to the center to connect with others and provide support.

Hernández-Sang, a doctoral student of ethnomusicology, said LACS has become a “home away from home.”

“It’s not only about creating professional connections,” he said. “Within UMD … it’s where we find at last the support, the resources and the connections that we cannot get from our … departments, in a way. So that’s what I think brings a lot of people to LACS.”

“Having this support is even extra special for that because we … share that in a way where we don’t always get that sort of attention,” Alvarez said.

Sergio García Mejía, a doctoral student in the civil and environmental engineering department, is the only Latin American graduate student in his research group. He appreciates the intellectual dialogues that take place in LACS.

“Many times we might find a lack of understanding or a lack of perspective in our own departments,” he said. “We often find that perspective or other perspectives in our community.”