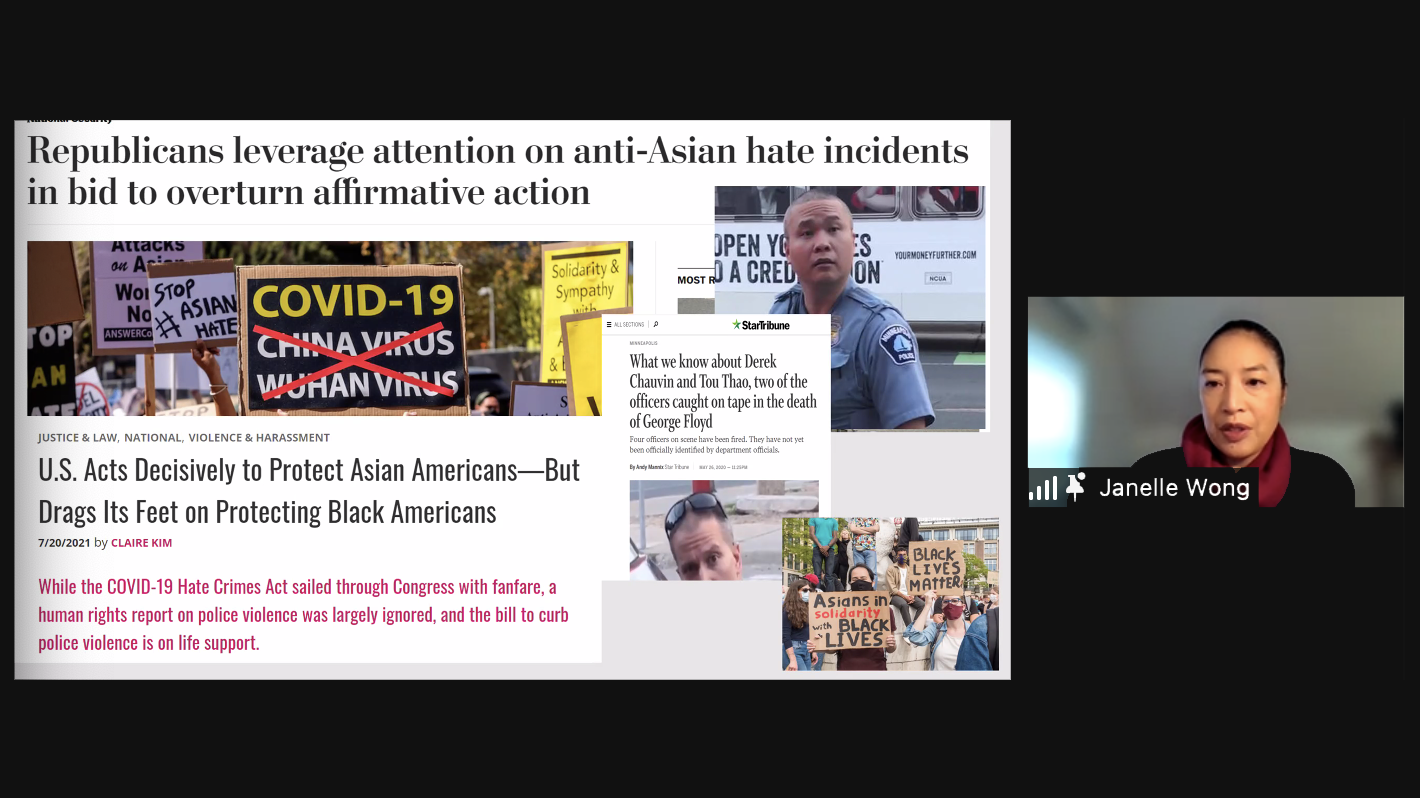 (Screenshot by Isaiah Hayes/For The Diamondback)

By Isaiah Hayes
For The Diamondback

On Friday, members of the University of Maryland’s arts and humanities college continued the Dean’s Colloquium Series on Race, Equity and Justice, hosted by Dean Bonnie Thornton Dill.

The goal of the colloquium series, which launched in 2020, is to expose students, staff and other university community members to issues of inequality, social justice and systemic racism in the U.S., according to the college’s website.

This year, the series has a focus on how systemic racism impacts Asian, Black, Jewish, LGBTQ+, Muslim and Arab populations in the U.S.

“It’s a really great chance for students to see models of how they can be forces for justice in the world,” said Patrick Warfield, the college’s associate dean for arts and programming.

Friday’s event featured a talk by Janelle Wong, a professor of American studies and government and politics. Wong discussed the effects of white supremacy in the U.S. on non-white groups.

Wong presented research on the Asian American Pacific Islander community, as well as other non-white communities, and their encounters with racial discrimination and white supremacy.

“Her research draws on public opinion surveys and government documents to illustrate surprising findings about the potential and challenges for interracial coalitions in this current moment,” Dill said during the event.
Wong conducted a survey in March that asked more than 16,000 adults of multiple ethnicities about their experiences with microaggressions.

Some of its key findings included that Asian Americans and Pacific Islanders are the most likely to report feeling like they have to “Americanize” their names. Additionally, Asian Americans and people of other ethnicities have been asked where they’re from under the assumption they are not from the U.S. Wong said this is part of the “forever foreigner” stereotype.

Wong also pointed out how Asian Americans are among the least likely to experience the assumptions of being dishonest among other microaggressions “because of the model minority stereotype.”

“Survey data reach out and give voice and help us to understand what people on the ground, your average person who will pick up the phone or take a survey … is thinking about these really complex issues,” Wong said.

[UMD SGA calls for intersectionality requirement for general education with amended bill]
Wong’s talk also went into detail about the support of affirmative action by Asian Americans. There has been consistent support of affirmative action over the past seven years from Asian Americans, although media coverage has focused on sensational headlines.

The talk expanded on immigration laws and how Black American communities support laws that give freedoms of U.S. immigrants — a group that makes up a large portion of the Asian American community.

“The form that racial discrimination takes is very different across different racial groups, and it’s both important to recognize our shared experiences … [and] to not flatten those experiences into a single dimension of racism,” Wong said.

The next colloquium will take place on Zoom on Dec. 9 at 9 a.m.