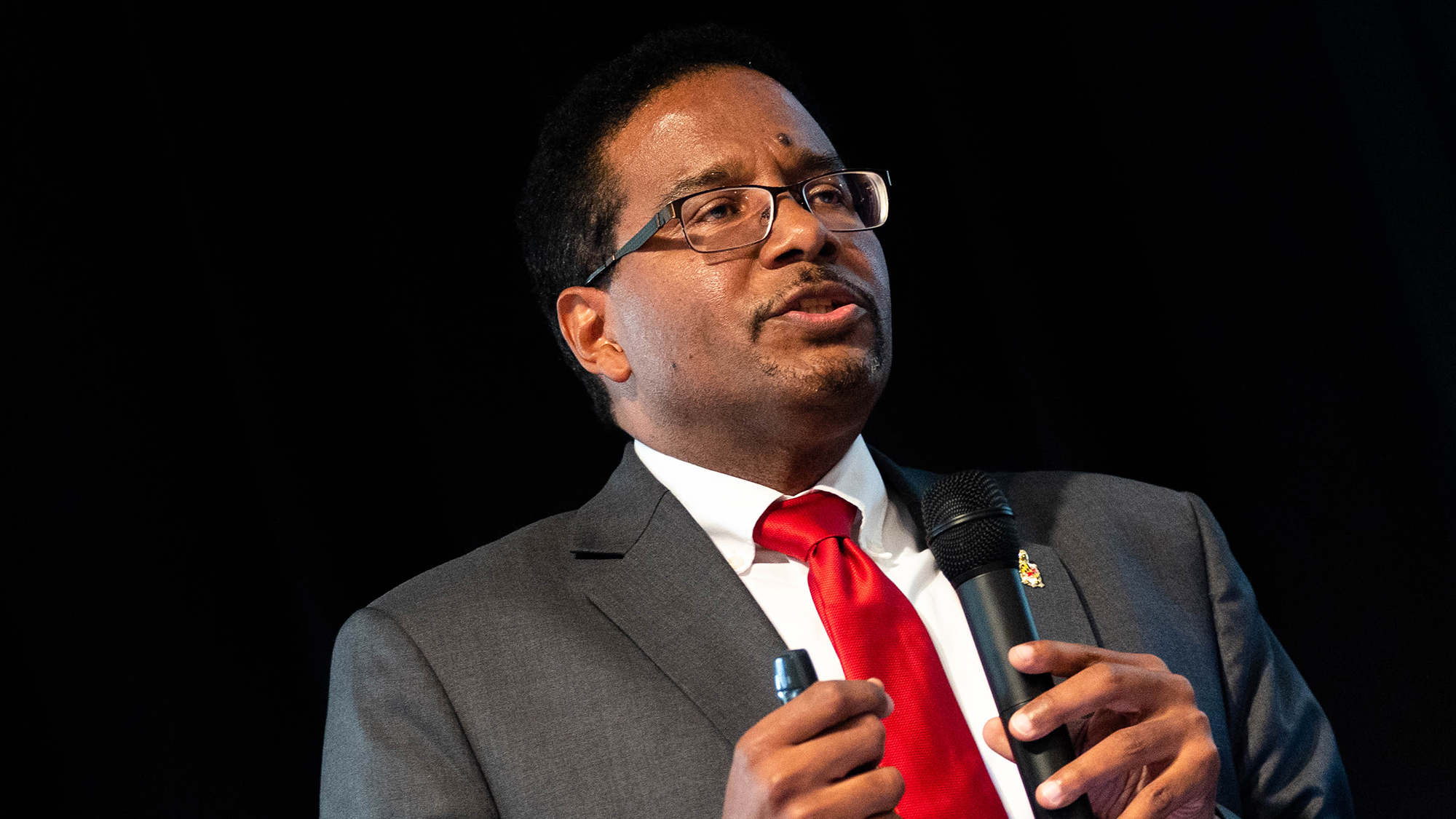 University of Maryland President Darryll Pines delivers the State of the Campus address in front of the university senate on Nov. 10, 2021. (Julia Nikhinson/The Diamondback)

The graphic was part of Pines’ State of the Campus address to the University Senate meeting last Wednesday. Community members say the graphic minimizes the racism and hardships many members of the Asian community face.

In a statement, the university said the graphic “was intended to show student populations that have historically represented 11 percent or less of our campus community — Black/African Americans, American Indians or Native Alaskans, Native Hawaiian or other Pacific Islander and Hispanics.”

The university also said it includes Asian and Asian Americans when referring to students of color, and it included such students when determining that “the majority of our most recent freshman class is comprised of people of color.”

But Anish Kakarla, President of the South Asian Student Association, said including Asian and Asian Americans to show the diversity of its freshman class feels “convenient.”

“[The university uses] us when they want to be diverse, and then not [use us in data] when they don’t want to,” Kakarla said.

The graphic perpetuated the idea that Asian Americans are “in close proximity to whiteness,” said Amanda Vu, the co-vice president of external affairs of the Asian American Student Union.

This idea is central to the model minority myth, an idea that paints Asians as “geniuses” or “gifted” and ignores historical racism against them while erasing diversity and individualism within Asian cultures, Vu said.

“It just puts us in a box where … forms of structure can just be like, ‘Hey, they’re doing well and they’re close to white people,’” the sophomore community health and psychology major said. “And it’s frustrating, honestly.”

Steve Sin is the director of the Unconventional Weapons and Technology Division of the National Consortium for the Study of Terrorism and Responses to Terrorism at this university. Sin said he came to America when he was 12 years old and has served in the military and holds a doctorate.

“The American dream story meant that my dad at age 55 worked three shifts, cleaning airplanes every day … or how my mom worked two jobs so that we can afford [tutoring],” Sin said.

But Sin has still faced discrimination, and he said the wording of the graphic and the model minority myth minimize the racism that Asian people have faced for decades.

“I’m still facing microaggressions. I’m still facing all those kinds of things that the minority populations face,” said Sin, who added that putting those things aside because Asian people are statistically affluent feels like a “cop out”.

“We should all be wary when these controversies take our focus off of equity for the groups that have the least access to our university. And that hurts all of us,” Wong said.

Plus, Kakarla said the fact that this wording made it to a University Senate meeting without anyone changing it shows that “people are not aware of those issues just yet and there’s still more work to do.”

“Sometimes it can feel frustrating as students to push for change and it not be heard by administration or it’s caught up in formalities and legalities. We don’t speak in those terms,” Vu said. “The work that I’ve seen in the Asian American community to raise awareness about these issues is super inspiring and empowers me.”