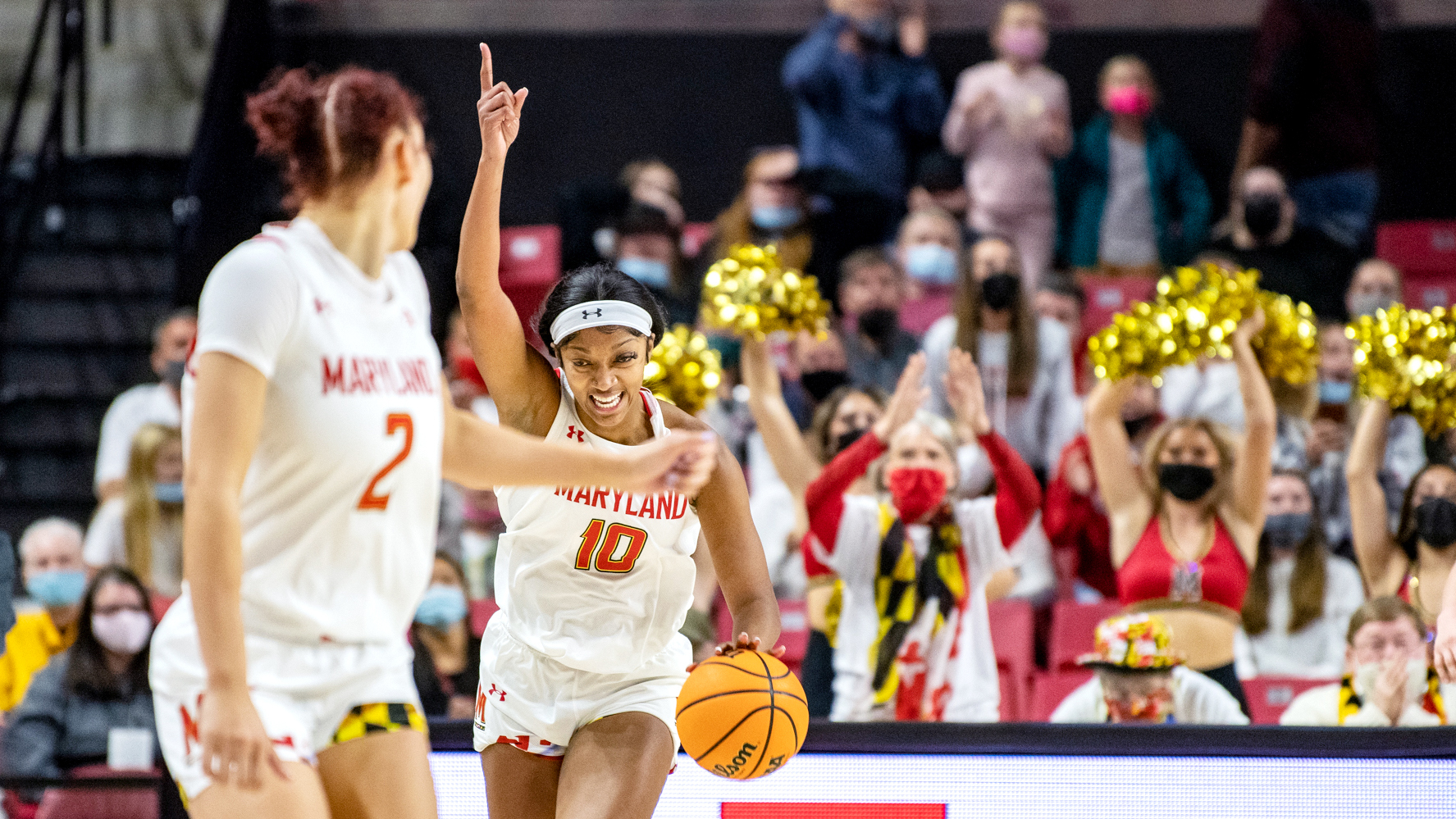 With 1:31 remaining in Maryland women’s basketball’s Sweet 16 matchup against Texas in the 2021 NCAA tournament, the Terps took a 59-57 lead after a putback from Chloe Bibby.

However, after the Longhorns tied it up on the ensuing possession, the wheels began to fall off.

An Ashley Owusu turnover and a wild layup from Diamond Miller helped put Texas in front. Further, a missed free throw by Kyra Lambert nearly led to an offensive rebound despite four Terps surrounding the basket and the rest of the Longhorns back on defense.

The befuddlement was on full display at that moment as the lead had quickly evaporated. A lack of urgency with 7.3 seconds left continued to highlight Maryland’s poor poise down the stretch.

The Terps looked lost in the closing moments. It painted a picture of the team’s inconsistencies in close games late as the lineup didn’t seem ready with the lights shining bright versus the Longhorns.

Throughout the 2020-21 season, Maryland played just three tournament teams outside of its conference. In Big Ten play, just five games were decided by single digits and the Terps went 4-3 in games decided by less than ten points.

A record-setting offense paved the way for a ton of blowouts last season, but the minimal experience in close games may have set Maryland up for failure down the stretch.

The Terps made sure that it wouldn’t be caught sleeping against steep competition this year. With national title hopes once again, Maryland began a run of three top-10 matchups over the next week with a 79-76 win over No. 6 Baylor.

“I didn’t want to be surprised in March,” coach Brenda Frese said. “It felt like a little bit that we needed better competition to prepare us. It was for most of us their first NCAA tournament and we didn’t get as many of those games because of COVID and teams being out.”

No. 5 North Carolina State and No. 7 Stanford await over Thanksgiving weekend in the Baha Mar Hoops Pink Flamingo Championship in Nassau, Bahamas. But up first in the three-legged gauntlet were the Bears.

Missing a key piece of the rotation in Katie Benzan, the offense had to salvage its playmaking a bit. That void gave Owusu the green light to run the offense her way — drawing defenders in the paint and dishing out to capable shooters.

“Just not trying to overthink it or do too much,” Owusu said. “Just kind of reading what the defense gives me and then taking it from there.”

One minute into the second quarter Owusu drew multiple defenders with a picture-perfect behind the back move to shake Jordan Lewis. Bibby sat in waiting in the corner as Owusu found the Aussie for a flawless three-pointer to take a 22-21 lead.

Baylor battled to maintain the back-and-forth affair, but the Terps held firm and continued to show no signs of frazzledness.

The defense rotated well as the focus stayed on shadowing the 2021 National Player of the Year, NaLyssa Smith. Angel Reese stepped up in that spot when on the floor, but early foul trouble gave way to the tandem of Collins and Bibby trying to pick up the pieces.

When Reese was off the court, Smith corralled 22 points

“It was just talk on the defensive end … switching and just communicating that we have each other’s back constantly,” Bibby said. “Whether you were guarding her on the perimeter or in the post, I think that came from everyone just to have that confidence.”

The obstacles kept adding up, as in the middle of the third quarter Miller hobbled off the court after reinjuring her right knee. As Miller exited the contest and Reese remained out, Smith and the Bears continued to chip away at Maryland’s lead.

Lewis had a quiet 29 points and Smith finished with 30 on 14-25 shooting, but the Terps’ poise down the stretch shined. Even as Baylor embarked on a late 8-0 run and cut the deficit to as small as three, Maryland kept clutching up in huge moments.

Reese converted an and-one with 1:08 remaining to put her total at 17 and the defense held strong despite a quality look at the buzzer from Sarah Andrews that would’ve sent the game to overtime.

With Benzan out, Miller exiting and Reese in foul trouble, Maryland had all the reason to break. But if this wire-to-wire finish is any indication of how the Terps have responded to its collapse versus Texas last season, they have all the tools to effectively handle adversity.

“I thought you saw their resiliency and their mental toughness,” Frese said. “A lot of teams would have folded with the adversity right now that we’ve been faced with, but this locker room is one of the most competitive locker rooms I’ve ever coached.”