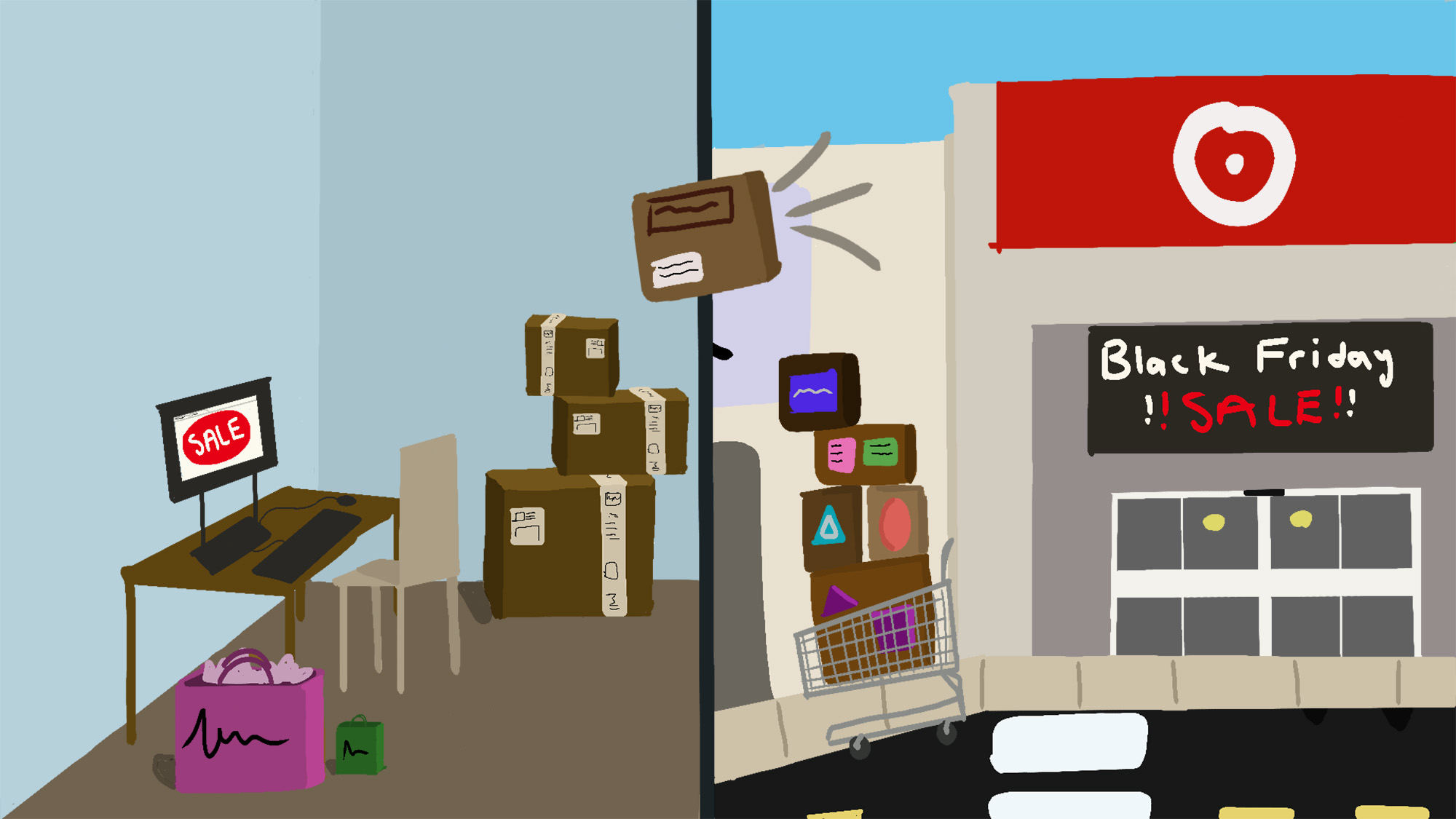 It’s that time of year again. The air is filled with the scent of capitalism and cheers of buying a toaster oven for half off. Next week is Black Friday, the prestigious American holiday that has consumers delighted and employees frightened.

For students at the University of Maryland, the opinions range from apathy to excitement. For some, the reopening of retailers marks an opportunity that online shopping can’t recreate.

“I feel like part of the experience is going and trying stuff on,” said junior business management and marketing major Sarah Spadaccini. “It was more for the experience than it was for the actual clothes, even though I do love clothes.”

Some students see Black Friday as an annual activity to enjoy with friends rather than just an opportunity to score deals.

“When I was a kid my aunt used to take me and my cousins and we would go through the night,” said junior government and politics and public policy major Holly Peslis. “All the kids would look forward to it and we loved it.”

Since the origin of Black Friday, retailers have competed to offer the best and most enticing deals to consumers, dangling killer deals in front of hungry spenders. On the consumer side, it’s become an annual military operation, planning routes, budgets and tactics as they try to nab the hottest markdowns before they disappear.

Over the years, the schedule of Black Friday has changed. Malls are opening later and closing earlier and the deals are less centered around Friday. It represents a fun outing to get excited for.

But for many, that was absent last year.

“You did lose that whole in-person aspect of being with your friends, getting their opinions on stuff and trying it on,” Peslis said.

Consumers still love to spend during the holiday season — 2020 saw a 33 percent increase in holiday spending and 2021 is projected to see another 10 percent increase. However, in-person attendance on Black Friday has suffered. For example, in 2020 indoor malls experienced a 42.2 percent drop in visits in November compared to 2019. Although this can be attributed to the pandemic, the numbers over the months are still less than pre-pandemic.

The biggest competition to indoor shopping on Black Friday is Cyber Monday, the online sales that take place the Monday after Thanksgiving. Online spending has steadily increased year by year thanks to aggressive marketing and pricing.

For companies such as Walmart or Target, the competition is a win-win — companies with a strong online and retail presence benefit from both holidays. However, the battle is more important for U.S. malls, which have already seen huge declines in attendees due to lockdowns.

This year, some are simply on the lookout for deals on goods that they need.

“Any shopping I do is already online anyway so I guess it’s probably going to be the same,” said sophomore mechanical engineering major Bryan Rose.

With average consumers projected to spend 12 hours this season shopping online, the grip Black Friday will have over consumers remains to be seen.

“I don’t know how long it will take, but I think our generation is so technologically [accustomed] … that Cyber Monday eventually will take over Black Friday,” said Spadaccini.