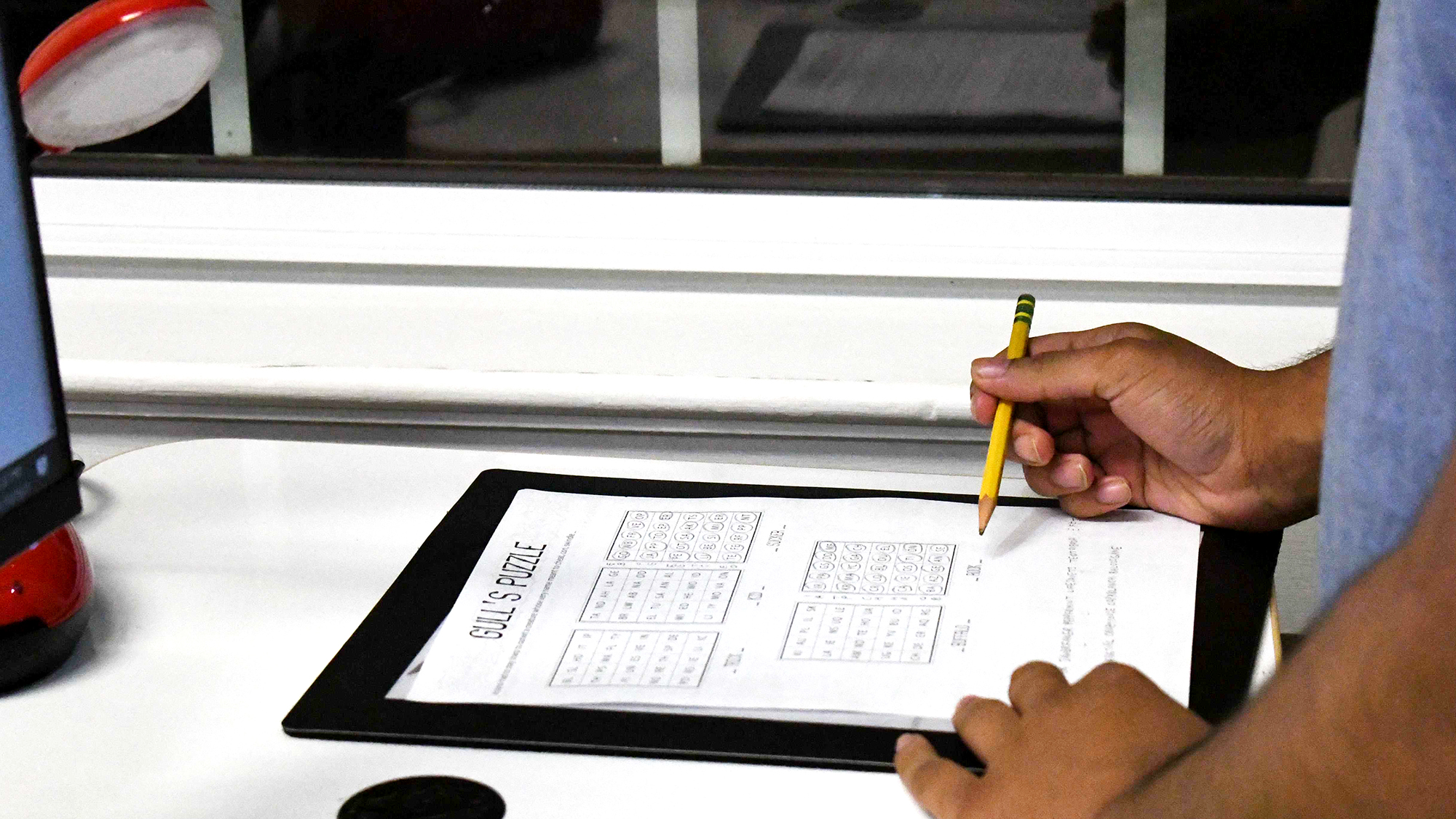 Members of the University of Maryland Puzzle Club arrived at the grocery story Eddie’s of Roland Park Sunday Nov. 7 at about 7:30 a.m. There, they began to solve a 1000-piece jigsaw puzzle before sunset as part of the Beat-the-Clock Puzzle Tournament. According to Grant Yang, a junior microbiology major and the club’s president, morale was high despite the chilly morning.

As club members were hard at work piecing together the puzzle, customers approached them. Some asked about what they were doing and what they were promoting while others gave suggestions about how they would solve it. Yang said it was exciting talking to different customers and participating in the event.

“We were just having a lot of fun,” he said.

From crosswords and sudoku to decryptions using Braille and Morse code, UMD Puzzle Club is all about solving difficult puzzles. They meet weekly on Wednesdays at 8 p.m. in room 2206 in Jimenez Hall.

A club meeting typically begins with everyone dividing into smaller groups based on skill level. Then, each group is assigned different puzzles or puzzle hunts to solve collaboratively. Occasionally, teams will competitively work on the same puzzle and see who can finish it first.

“We’re getting really stuck,” said sophomore computer science and mathematics major Zain Majumder while working on the puzzle. “I’m starting to feel like there’s some trickery going on in this puzzle I haven’t figured out yet.”

The puzzles they solve every week vary and are either from old club puzzle hunts or other sources, according to senior neuroscience major Ethan Medwetsky.

Although rare, the club hosts events larger than just a weekly meeting. Once or twice a year, they host special puzzle hunts written by members of the club that are open to the university student body. These puzzle hunts consist of all kinds of puzzles and the answers are often either a word or a phrase. After solving all the individual puzzles, students try to solve a metapuzzle that incorporates all the answers from the previous puzzles. Majumder described a metapuzzle as a “final boss puzzle.”

[Review: ‘Julia’ captures ‘the French chef’ in all her glory]

As a puzzle writer for the club, Majumder helps write the puzzles for the special puzzle hunts. He said it takes a lot to be able to write a good puzzle, including creativity, expertise in puzzles and good judgement on whether a puzzle has enough clues to make it challenging yet fair.

The previous special puzzle hunt was held on Oct. 23. Majumder said there will probably not be another one for a while.

“It takes a lot of logistics and a lot of time and effort to write them,” he said. “We’d really like to, but we just can’t.”

Junior math major Steppan Konoplev said the writers for the puzzle hunts do a great job at making puzzles. The only downside he described is sometimes the puzzles can be too difficult and it can be unclear what the solution is.

UMD Puzzle Club is open to all students — experienced or not — who are interested in solving puzzles. Several members have been puzzle solvers for many years. For example, both Yang and Majumder both got into solving puzzles before attending college and participated in puzzle hunts online. However, some members were new to puzzle hunts upon joining. Medwetsky had only done puzzles such as crosswords and sudoku beforehand. He said he’s enjoyed his experience being in the club.

“It’s been great,” Medwetsky said. “There’s a sense of satisfaction you get not only when you finish the puzzle but when you can feel yourself making progress on a puzzle.”

“I think that doing puzzles activates a part of your brain that you don’t really use when you’re just trying to memorize things for an exam,” he said.

Medwetsky said he doesn’t know if solving puzzles has a real-world use, but he does think people will enjoy it.

“It improves people’s mental states because it’s fun,” he said.