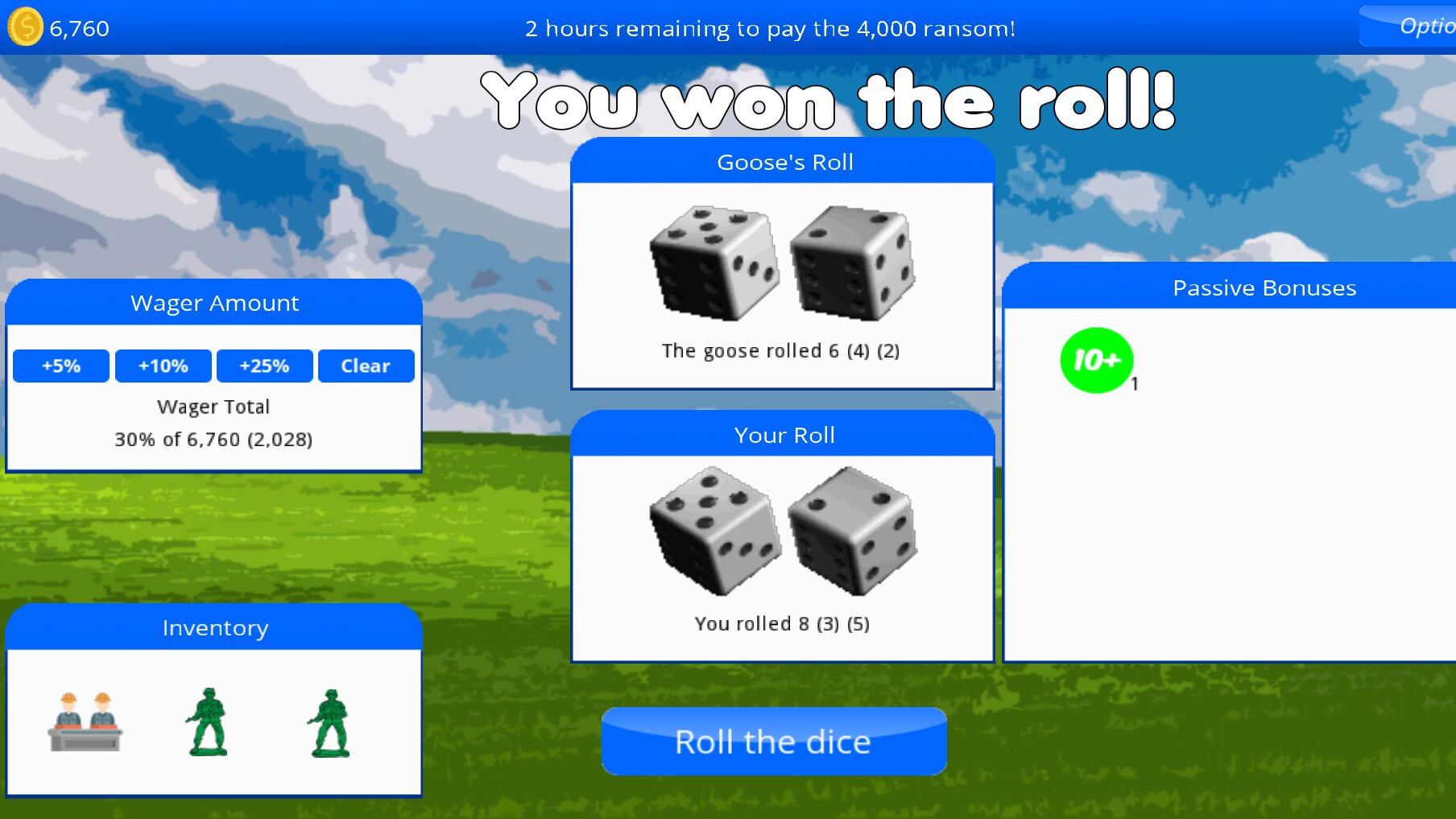 A hallmark of roguelites is generally a procedural and often endless environment, but Wager manages to capture the genre’s permadeath stakes with a gambling simulator set in a mockup of Windows 7.

Zever Games’ Nov. 11 release pits the player against a hacker named Goose — which may be a reference to Untitled Goose Game, judging by the many honks in the chat pop-ups — who has stolen the player’s files and demands a ransom.

The gameplay loop is repeated dice rolls against Goose, benchmarked by ransom payments every few rolls.

And if you can’t pay, you lose — the equivalent to roguelite permadeath. Wager also offers a variety of items and passive bonuses that can stack to provide an edge against Goose.

Games in the same vein as Wizard of Legend or The Binding of Isaac use items like this to change the experience between each run. Wager doesn’t have traditional dungeon runs, but watching the coin count reset to start betting against the dastardly Goose still has the same thrill.

This is perhaps the simplest construction of the roguelite template. No fancy maps to design or program, no attacks or particle effects to animate. Zever has streamlined the experience, requiring as few inputs as possible to reach the same level of infatuation.

As a gambling simulator, it seems dangerous to enjoy it. But I think raising a wager in a desperate attempt to pay the next ransom installment to a fictional hacker is akin to using a special attack that leaves you vulnerable to take down the big boss in a more generous game.

Hearing the sad little tone as Goose wins a roll with my whole pile on the line is the same devastation that I feel after botching a 35-minute run in Wizard of Legend after acquiring the perfect recipe of collectibles to be a wizardly powerhouse.

But, that devastation is followed by elation when I can reset with a new set of powerups to see where that takes me.

Of course, simplicity costs intrigue in Wager. The pixelated Windows skybox and operating system is charming for a few rounds, but if I’m going to play a roguelike, I prefer to gamble with my time, effort and sanity.

On Steam, Wager is currently $4.99, but I’m flabbergasted that it isn’t in the free-to-play section. It’s more of a concentrated experience to illuminate the addiction-teasing innards of roguelites than an engaging game in its own right.

Generously speaking, Wager is refined to the point of maximum efficiency. Less generously, it shows the minimum effort a game studio can put into a basically passable excuse for a roguelite. To chase the emotional torment unique to the genre, play something else.